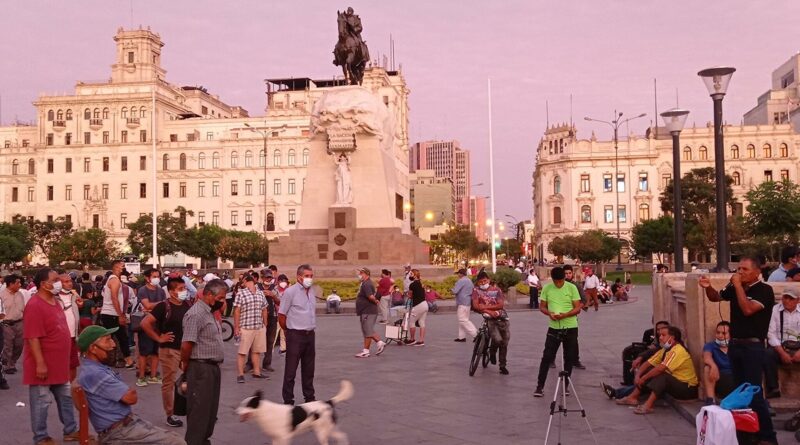 The progressive parties stressed the need to hold a Constituent Assembly that includes all social sectors of the country. The COVID-19 pandemic revealed shortcomings that need to be addressed in the healthcare and education systems.

Six days before the presidential elections in Peru, the picture is not clear. Out of 20 candidates to occupy the House of Pizarro, half have a chance to go to the second round. According to polls, no one exceeds 15% of the intention to vote.

But when walking the streets of Lima, the Peruvian capital, it is perceived that the left-wing parties, represented by Verónika Mendoza, from Together for Peru, and Pedro Castillo, from Peru Libre, have more support than what is reflected in the polls.

Both Mendoza and Castillo propose to hold a Constituent Assembly to rewrite the Peruvian Constitution.

Gladis Vila Pihue, from the Quechua indigenous people, is a member of the Political Commission of Together for Peru. “In the Constitution we are told that we are a multicultural, multilingual country, but it is only declarative. In a government led by Verónika Mendoza we aspire to have our rights respected,” she told Sputnik.

And she added: “It is time for the left to rule Peru.”

Currently, the voting intention surveys that circulate are carried out with small samples (of no more than 2,000 people) by telephone. For this reason, they exclude the population of rural areas, which represent more than 20% of the 32 million inhabitants of the country, according to the 2017 census.

The end of the political crisis?
The last time the country elected a president, in 2016, it opted for the right-wing Pedro Pablo Kuczynski, who had to resign in 2018 amid a political-media scandal, when videos were broadcast showing exchanges of favors with opposition congressmen. Currently, the former president is under house arrest.

Then his vice president, Martín Vizcarra, took office, whose term ended in October 2020, when Congress declared that he had a “moral incapacity” to carry out his position, in addition to being implicated in several corruption cases.

When Congressman Manuel Merino assumed the presidency, whose mandate was brief: it lasted from November 10 to November 15, 2020. He resigned amid protests that caused five deaths. Then it was the turn of Francisco Sagasti, who, until now, managed to take the electoral process to its culmination, which will be next April 11.

“We are in a very complex situation, in which we do not know exactly who will go to the second round,” Congresswoman Rocío Silva Santisteban, from the Broad Front, told Sputnik.

“The panorama is really very uncertain. It is only known that it is a dwarf race, because they are all very small. They measure 10, 11 or 12% in voters preferences. It is an absolute uncertainty,” he said.

Machismo in Peruvian politics
Last year, when Vizcarra was displaced, Silva Santisteban fell short of the votes needed to become the first woman president in Peruvian history. But, according to her, her feminist and left-wing values ​​took away the support of the strong local right, which dominates Congress.

At that moment, hours before the vote, “a campaign was unleashed to point out that I was a terrorist and that I had defended the terrorists of the MRTA (Túpac Amaru Revolutionary Movement), as well as a series of incredible lies.”

She added that “the Peruvian right, in addition to having a great economic capacity, is also very fast. Immediately the social networks were filled with lies about me.”

The congresswoman affirmed that “the right here is really strong, but it is especially strong with women who consider ourselves feminists and on the left.” In this sense, she acknowledged that “if Verónika Mendoza manages to go to the second round, she will have to face a complex and difficult panorama.”

The voice of indigenous peoples
Vila Pihue has years of working with indigenous and peasant communities in Huancavelica, in the center of the country. In 2009 she was among the founders of the National Organization of Andean and Amazonian Indigenous Women of Peru (Onamiap). She was also a leader of the National Association of Ecological Producers (ANPE).

“We are six days away from the great democratic event in our country, where we are once again facing a confrontation between the right and the left: capitalism and the Peruvian people,” the Quechua woman diagnosed.

“Currently we are sharing proposals of our government plan, we also listen to the population, to representatives of the 55 indigenous peoples of Peru, with whom we communicate in 48 different languages,” said Vila Pihue.

“We want to form a government with the people. With Verónika we aspire to have a multi-ethnic and multi-cultural country, where we can work among diverse cultures and thus feel part of this republic,” she said.

The problem is that on the opposite side of the street “we find a millionaire campaign from the right. What they do is outrageous: they buy votes, they take over the media, they also buy polls,” she said.

According to Vila Pihue, “the indigenous peoples feel made invisible by the right-wing parties. Especially because they use our clothes, our language, but only to capture votes in the campaign. Because when you analyze their government plans, the indigenous peoples are no where to be found, besides some social assistance program.”

So for her “it is urgent and necessary to have a Constituent Assembly. There are several parts of the Constitution of Peru that must be improved. And it has to be drawn up with the participation of indigenous peoples.”

The shadow of COVID-19
The presidential campaign is conditioned by the presence of the coronavirus, the second wave of which has persisted in the country since last January. “It is an atypical campaign. Every day we are losing many friends, relatives, activists. This situation has exposed the very precarious reality that we have in the healthcare and educational systems,” said Vila Pihue.

From March 2020 to April 4, the Ministry of Health accounted for 1,568,345 cases of COVID-19. At the moment, 52,331 people have died from this disease. But the figure would be higher: the National Death Information System (SINADEF) registered more than 131,000 deaths from coronavirus in the same period.

For congresswoman Silva Santisteban, it is essential that the next government deals with facing the pandemic adequately. She criticized that the COVID-19 vaccines are not being applied to older adults, but to medical union members (such as psychologists) who are not on the front line of the fight against the pandemic.

She also expressed concern about the persistence of the pandemic, which last April 2 caused the death of 294 people in a single day:

“We are not facing an unknown virus. There has already been a year of experience for internists. But, unfortunately, 30 years of neoliberalism in Peru destroyed the healthcare and education system.”

In recent months, hundreds of people have died due to lack of oxygen tanks and intensive care units (ICU). But, in addition, the country lacks qualified personnel to handle artificial respirators. For this reason, she considered it necessary for qualified foreign medical personnel to come to the country.

“In Peru we have had economic growth, but it has not served to invest in the common good,” said the congresswoman. “That is why I think that in this country there has to be a shift. And it has to be to the left,”