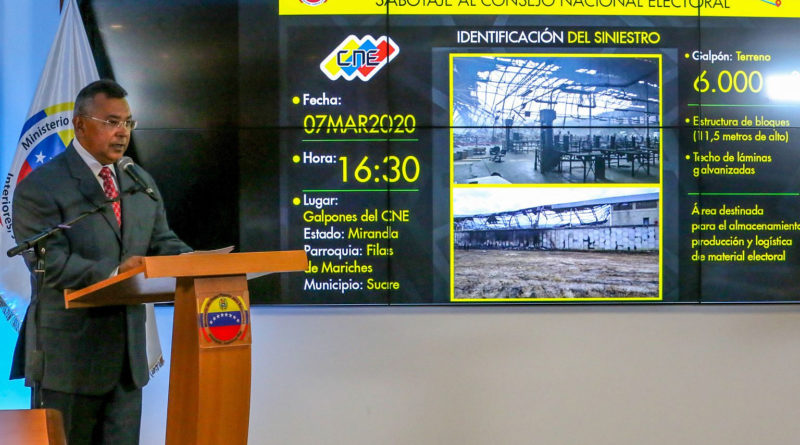 Venezuelan Minister of the Interior and Justice, Néstor Reverol, announced this Thursday that the day before – and for several weeks – the fire caused by terrorist groups in a CNE’s warehouse, the technicians were doing the replacement of various damaged parts of voting machines. On Friday, March 6, they replaced an important part of electoral plastic membranes that were deposited next to the warehouse.

Reverol reported that the fire against the CNE was intentional and sought to destabilize the country. The terrorist act, as he labeled it, was committed on March 7, 2020. On that day more than 49,000 voting machines were destroyed, 49,323 integrated authentication systems (fingerprint scanners), 582 Civil Registry computers and 400 electronic balloting units among other equipment.

Expert sources said on Union Radio that most of the equipment was insured.

Three ignition points were located around the perimeter, started with accelerating material. The investigation found 2 fuel drums, allegedly used to start the fire.

The nature of the mainly burned pieces, which were also sprayed with gasoline, allowed the rapid spread of fire from the 3 premeditated starting points to the entire structure, causing an aggressively behaving fire that reached 11 meters in height.

Venezuelans wonder why a strategic place like this was not safeguarded enough with security agents and surveillance technology. They also wonder if those safeguards were in place, what is being done to capture the terrorists.

The minister announced that they will capture the terrorists responsible with a multidisciplinary team, which will be under the command of Commissioner Douglas Rico, director of the Corps of Scientific, Criminal and Criminal Investigations (Cicpc) and it will be supervised by the National Body against Terrorism.

“The Venezuelan electoral system is not only electoral machines; that is only one part of a robust system, with a great capacity for resolution, legal, procedural, technical, technological, operational and logistical, with more than 17 years of experience and valuable human resources, capable of overcoming any adversity. Our electoral system will never be destroyed,” he stressed.