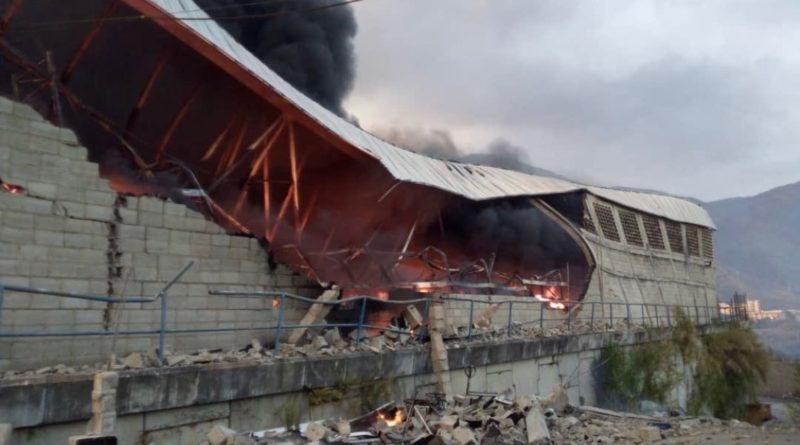 The president of the National Electoral Council (CNE), Tibisay Lucena, offered on Sunday March 8 an accounting after the fire registered in the warehouse of said agency in Filas de Mariche, Miranda state, affecting the machinery of two of its electoral processes, in the areas of inventory and machine production.

“At 5:05 in the afternoon the flames had spread to the inner part of the enclosure. 582 computers belonging to the Civil Registry were burned in this fire, more than 49 thousand voting machines; 400 electronic balloting units,” she said.

During a press conference, the highest representative of the Electoral Power said that 105 thousand memory cards of voting machines were saved; the servers, 562 voting machines model 4300, and more than 700 fingerprint scanners used in Venezuela to avoid double voting.

“There are numerous losses due to the great fire that consumed a CNE warehouse, inside were machines used for voting, as well as computers,” she said.

Lucena said they are waiting for the investigation. “We have spoken with Minister Néstor Reverol, all have begun the investigations, taking the tests, seeing what can be determined,” she said.

A “Venezuelan Patriot Front” Claims Responsibility for the Terrorist Attack

“This command promotes again the War to Death decree that on June 15, 1813 our Liberator signed against the traitors to the country (…) those who oppose the end of the usurper Nicolás Maduro will be considered a military objective…” said a masked spokesman for the terrorist group in a video posted on twitter.

In the video, the terrorist group also claimed the fire at the premises of the CANTV company in Valencia, Carabobo state, which occurred on February 8 in a terrorist operation they called “Genesis”, destroying key telecommunication infrastructure belonging to the state communication company.

“On March 7, operation “Sodoma” began in the warehouses of the CNE, this entity that has violated the rights of the people in fraudulent elections,” they added.

They ended up referring to March 10, that the deputy Guaido has pointed to as his new D-day in a clear warning that terrorist actions might be planned for that day.

Diosdado Cabello, vice-president of the PSUV, when consulted on this new terrorist strategy by the right wing factors of Venezuela, said: “it is very easy to think that those who are behind it are those who do not want elections. In fact, there is already a terrorist group that claimed responsibility, but this has been orchestrated by all sectors of the Venezuelan opposition.”

I am struck that Venezuelan opposition has not strongly repudiated this statement #terrorism #Venezuela #antiChavismo https://t.co/oVpvyntVvA

In a tweet posted by former CNN anchor Carlos Montero, the journalist drew attention with his surprise at not seeing any Venezuelan opposition leader condemning the claims of this new terrorist organization.