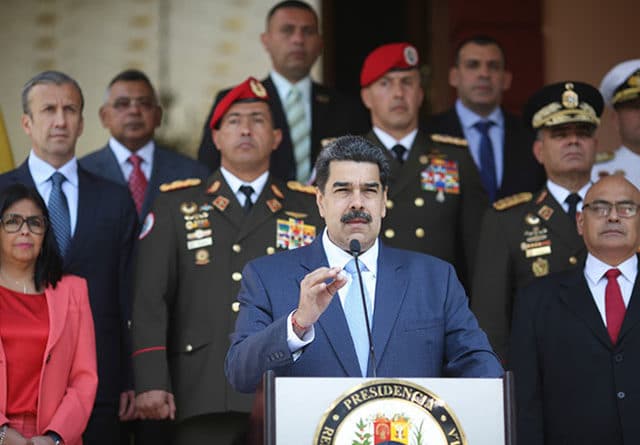 In a statement given from the Miraflores Palace, President Nicolás Maduro announced the declaration of a health emergency due to the advance of the coronavirus worldwide, as well as the suspension of flights from Colombia and Europe for one month, and the suspension of massive public concentrations, concerts and events. Accompanied by Executive Vice President Delcy Rodríguez; the Minister of Health, Carlos Alvarado; the vice president of economy, Tareck El Aissami; Defense Minister Vladimir Padrino and other authorities said that no cases of Covid 19 have been detected in Venezuela, after 30 suspected cases have been ruled out.

Similar measures were announced today by several Presidents and authorities in Latin America, like Colombia, Peru, Bolivia and Argentina, with the most drastic decision being taken by Salvadorian President Nayib Bukele who decided to forbid the entering of foreigners to El Salvador for 21 days.

The Venezuelan President highlighted that “it has cost them three times as much effort” to be able to obtain test kits for the detection of the coronavirus and different supplies, as a result of the illegal sanctions and the blockade that the United States government applies against Venezuela, which is why he demanded once again that the President of the United States, Donald Trump, lift the sanctions.

“This is a right moment to demand that President Donald Trump lift the criminal sanctions against Venezuela, for us to be able to go out and buy everything that is needed at the medical level to deal with this situation,” he said. “It costs us three times more to go out and look for the diagnostic test kits, to have enough for this stage. But we have succeeded, and we continue to search for the successive stages that may come.”

He indicated that “in the first exchange, we went out to buy diagnostic test kits for coronavirus in the world, and international private companies said they were threatened with criminal sanctions by the United States government, which even in these cases persecutes us.”

He noted that 46 public hospitals nationwide are the ones that will be directing the coronavirus care process. He also indicated that private clinics will join in the care provision, giving them all the guarantees to work together.

Support from China and Cuba
He indicated that, thanks to the Cuba-Venezuela agreement, there are 10,000 doses of the drug Interferon to provide treatment to those who may appear to be affected.

He thanked the People’s Republic of China for their support. He indicated that thousands of diagnostic test kits have been supplied by the Asian giant. “We are officially and urgently asking you to send us a group of experts, who have been in the fight and control of this pandemic in China, to add knowledge and effort.” He indicated being willing to listen to recommendations from all sectors regardless of political barriers.

Flights from Europe and Colombia
The suspension of flights from Colombia and Europe will be for a month, said the President. Still under evaluation is whether flights from other regions are suspended “and new measures will be announced if necessary.”

Suspension of public events
Likewise, he announced the suspension and prohibition of massive public gatherings, massive public events. Public spaces such as museums will be closed and gatherings will be avoided because”in closed places and crowded public places, the [environment] is created for the transmission and multiplication of this pandemic.”

He reported that Vice President Delcy Rodríguez will make announcements in the coming days and will coordinate with public institutions and churches, and called for awareness of the need to cooperate on this issue.

Work with Colombia
He also indicated that “supreme efforts” are being made to coordinate with the Colombian government, given that several cases have appeared there. He expressed solidarity with the people of that country, recalled that 60,000 to 80,000 people move daily on binational borders and warned the president of that country, Iván Duque, that beyond ideological differences, “this is a real humanitarian situation. We need to coordinate from government to government”, between both ministries of health and between both health authorities,”to cordon off the entire border, act together and protect both peoples. ”

“Our Minister of Health is calling the Minister of Colombia,” emphasized Maduro. He also asked the health authorities in the states of Táchira, Zulia, Apure and Amazonas to establish coordination urgently. “We cannot make excuses of a political nature, because we cannot politicize this issue,” he said.

He indicated that the possibility of closing the border between Colombia and Brazil is contemplated, but “the first thing we need is coordination with the health and medical authorities” of both countries. “We will insist a thousand times so that differences are set aside ideological; they are small things before this pandemic.”

Popular power
President Maduro also asked the 46,000 communal councils in the country, the local supply and production councils (Clap) and the country’s social movements “to take the lead in the battle to protect the people of Venezuela from this pandemic.”

“If we have to face the closure of towns and cities in due course, we will protect the workers and the companies and entrepreneurs of the country. Have no doubt! ” said the Venezuelan president. “We will protect the right to education under the conditions that affect us. If we have to partially suspend classes in a locality, in a town or across the country, we will guarantee that the school year continues through social networks, the Internet or technological channels,” he said.

He called on all public officials, ministries, health, civil and military authorities in the country, “to rise to these circumstances, to the challenge of this pandemic.” He asked labor unions and political sectors not to politicize this situation.

If there is a problem in a hospital, “you have to solve it and not make it a political flag,” he said about a journalist’s question, due to a protest that took place in one of the 46 sentinel hospitals due to lack of supplies and water. “The minister of health and the presidential commission must attend immediately to any case, of the 46 sentinel hospitals and those that might be added.”

The president guaranteed that the country will succeed. “This is not the time for differences and confrontations; it is the moment of cooperation, understanding and agreements.” He regretted that some sectors of the opposition are politicizing the issue, as if they wish the pandemic to land in Venezuela.

Effects on the economy
Maduro also stressed the effects of the coronavirus on international stock markets, as well as the drop in oil prices . “These are catastrophic announcements in the fields of the economy, finance and oil,” said Maduro, recalling that Venezuelan oil fell from $ 48 to $ 25 a barrel, which “severely hits income.”

In this regard, he indicated that he was in contact with OPEC countries and oil producers such as Russia, to seek solutions from OPEC and OPEC+ in the short, medium and long term. “In this circumstance, the importance for the health and balance of the world economy and finances of the stabilization agreements between the OPEC, Russia and the other oil exporting countries has been demonstrated.”

“Let us return to unity, to dialogue and look for agreements for solutions that return the equilibrium situation to the oil market,” he told the partners of the OPEC and extra-OPEC (OPEC+).

He indicated that Venezuela is prepared to face these difficulties, thanks to the experience gained after facing the economic war and the self-regulation that has been achieved in the economy.

“We are ready to raise our prevention and protection measures to the highest levels, as necessary to protect our people.”

He indicated to Venezuelan businessmen that they are prepared to support them. “I have seen a series of decisions and actions: tax exemptions, payment of payrolls through the Carnet de la Patria system, support with soft loans to the business sector.”