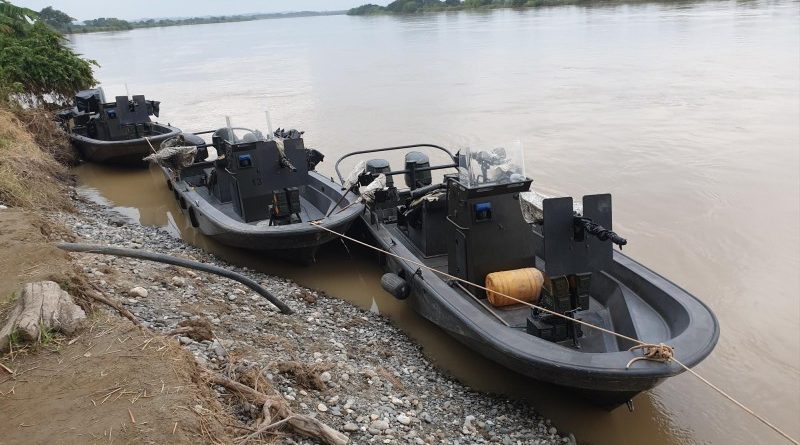 An “incident” occurred this past May 9, where three boats belonging to the Colombian Navy, fully armored and equiped for combat, were found abandoned in Venezuela, in an area called Chorro el Mono, Cedeno Municipality, Bolivar state. It caused reactions on twitter after the version offered by the Colombian military argued that they were carried away by the force of the current to Venezuelan territory.

Venezuelan President Nicolás Maduro reported the discovery in the Orinoco River of three Colombian Army speedboats with all their weapons. The boats were detected by the Bolivarian National Guard thanks to 24-hour active patrol work.

The most important Venezuelan hydro-electrical dam (Guri) is located some 700 Km away from the border between Venezuela and Colombia in the Orinoco River near Puerto Ayacucho and online maps do not show where the boats were found, raising alarm among Venezuelans.

Look how close CERRO EL MONO is to Gury Dam and look how far it is Puerto Ayacucho (closest river entry from Colombia). Today Colombian authorities allegedly claim that the boats were missing, but we are sure our Army has strengthen security around Guri. pic.twitter.com/dVTOlJyLQG

Given the facts, the Colombian Navy issued a statement explaining that “three Colombian Navy boats were at a River Control Post moored on the banks of the Meta River, in the Vichada department, on the Colombian-Venezuelan border, and that at the time they were unmanned, they were swept away by the current at dawn today.” And they add that “According to the preliminary account, the incident occurred when the sentry in charge of the safety of the boats realized that, due to the effects of the strong current, the boats were dragged by the river, without having the opportunity to recover them.”

The incident raises suspicion among many in Venezuela and abroad due to the evident participation of Colombia in a neutralized mercenary operation to kill/kidnap President Nicolas Maduro.

The statement was issued by the Colombian navy through its official Twitter account, where the comments popped up in no time.

User @gilpinto tweeted: “They also left some gringo marines, some drug traffickers and tons of cocaine that go to the US every day.”

For his part, @auroraromer47 said “Tied up with machine guns and everything? These had to be Guaidog friends and Trump stalwarts! Do you believe yourselves, assholes? Make a letter of request for these vessels to the legitimate president of the Bolivarian Republic of Venezuela, @NicolasMaduro and nothing has happened here.”

“My 5-year-old daughter is learning to tie her shoes, I can tell her to teach them how to tie knots,” said @Evaldo980.

@AlcidesDGB wrote: “This is how the cocaine they produce ends up in the US, it’s carried away by the current.”

@Margaruz published: “Even objects even have their own intelligence! As everything from Colombia ends up here … Don’t shame yourself, delete that comical statement.”

“Maybe the next step would be that a statement is issued by the Colombian Air Force saying that F16 planes in the hangars were blown into Venezuelan territory by a strong breeze … Yes, these devils…,” said @crescencio78196.