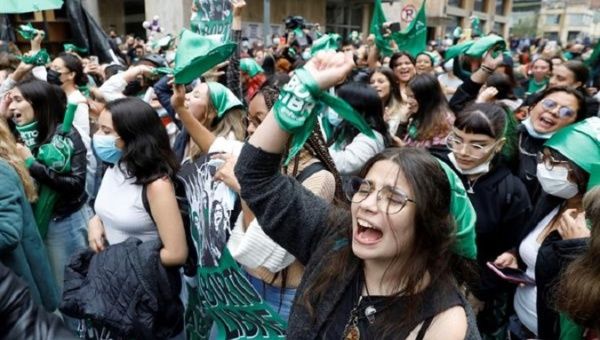 “We welcome this decision, which is the result of many years of struggle,” women’s rights defenders stated.

By five votes in favor and four votes against, Colombia’s Constitutional Court on Monday approved the voluntary termination of pregnancy until 24 weeks of gestation.

“We welcome this decision, which is the result of many years of struggle,” the Causa Justa members stated. In recent months, the Constitutional Court judges analyzed two requests that questioned the section of the Colombian penal code that criminalized abortion.

In the first requirement, lawyer Andres Sanchez argued that such articles violated rights protected by the Constitution, including the right to human dignity, equality, and freedom. Filed by the Causa Justa coalition, the second request argued that the Penal Code had presented abortion so negatively that it discouraged women from applying to it even when they had the legal right to undergo the procedure.

Since 2006, Colombia has allowed abortion on three grounds: rape, fetal malformation, or health risk to the mother, without a time limit. In 2020, however, at least 4,268 Colombian girls between 10 and 14 years old victims of rape became mothers.

The #ConferenceonDisarmament, under the Presidency of Colombia, adopts a Decision establishing Subsidiary Bodies on the agenda items of the Conference.

Congratulations! The CD Secretariat looks forward to continue supporting the substantive work of the Conference. pic.twitter.com/vmIMRGFeiN

While the Colombian judges have not yet ruled on the unconstitutionality of the laws criminalizing abortion, their verdict in favor of the Causa Justa request establishes a firm jurisprudence that cannot be eliminated.

On Monday, the Constitutional Court also called on Congress and President Ivan Duque administration to design and implement a comprehensive policy on sexual and reproductive rights in the shortest possible time.

“This strategy should comprise the disclosure of the options available to women during and after pregnancy, the existence of pregnancy planning and prevention tools, and measures to guarantee the rights of the children born of non-desired pregnancies,” the Court stated.