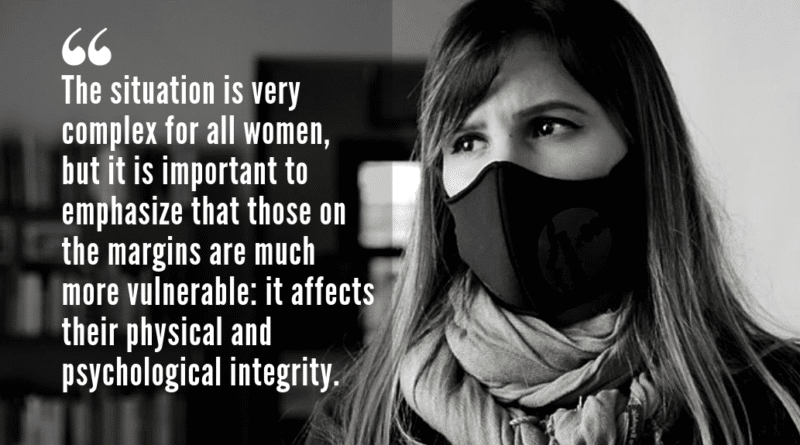 The case of a young activist arrested for allegedly helping a 13-year-old rape victim terminate a pregnancy has galvanized feminist movements in Venezuela.

Venus Faddoul is a lawyer and the director of 100% Estrógeno, an organization that focuses on women’s rights in Venezuela. Today Faddoul forms part of Vannesa Rosales’ defense team. Rosales is a young teacher and activist now under house arrest for allegedly assisting a 13-year-old rape victim to abort. Many Venezuelan feminists hope that her case will open the path for decriminalizing abortion in the country. In this interview, the lawyer talks to us about Venezuela’s legislation regarding abortion and explains Rosales’ case.

What can you tell us about Venezuela’s legislation regarding abortion which, as we understand, dates back to the late 19th century?

Venezuela’s legislation is indeed backward. The regulation that criminalizes abortion dates back to Venezuela’s 1873 Penal Code, and it hardly changed throughout the 20th century. In fact, there were no amendments made in the last reform to the Penal Code in 2005.

In other words, our legislation regarding the voluntary interruption of pregnancy dates back to the 19th century! This legal framework clashes with international agreements, treaties, and conventions that defend and protect human rights in general and women’s sexual and reproductive rights in particular. In fact, the current Penal Code clashes with agreements that Venezuela has signed and ratified, including Belém do Pará and CEDAW.

Are there any circumstances that would allow for a legal abortion?

If a woman is convicted for carrying out an abortion, what is the sentence?

According to the Penal Code, it can be six months to five years in prison.

Venezuela is going through a profound crisis. What are the consequences of criminalizing abortion on women in general, and especially the poorest women in our society?

All Venezuelan women are affected by the legal norms regarding abortion, but of course, poor women are the most vulnerable. They cannot afford contraceptives, which have a monthly cost of up to ten minimum wages, and it is even harder for them to interrupt a pregnancy in a safe way, because purchasing the pills on the black market is exorbitantly expensive. Obviously, women with economic resources have access to both contraceptive methods and safer mechanisms to terminate a pregnancy, but they too face an unregulated underground market.

Poor women confront very dangerous situations: their health and even their lives are in danger, and the state limits their reproductive autonomy. Poor women are the big victims of this situation: if an abortion is needed, they have to resort to obscure methods that endanger their physical integrity. In addition to that, because these operations are clandestine, that means that those with mercantile interests will most often extort huge amounts of money from women.

In fact, even those women who have resources and have access to a private medical service face risks. Criminalization imposes clandestinity, which affects the safety and autonomy (and therefore human rights) of all women. How do we learn about the profile of the doctors offering the service in an opaque and unregulated subworld? Are they really going to help us? What are their economic interests? Will they continue to accompany us, if a problem comes up?

The situation is very complex for all women, but again it is important to emphasize that those on the margins are much more vulnerable: it affects their physical and psychological integrity. Moreover, it is no secret that death is a possible outcome for women who are forced to carry out clandestine abortions.

Abortion is criminalized regardless of a woman’s class. If a woman is accused of voluntarily terminating a pregnancy – and if it can be proven – she will be prosecuted.

Vannesa Rosales was detained in October 2020 for allegedly assisting a very poor 13-year-old girl to terminate her pregnancy. Tell us about her case.

Vannesa was arrested on October 12, 2020, through a highly questionable procedure: the police stormed into her home without a search warrant. She then spent nearly three months in the jails of the Mérida CICPC [criminalistic and forensic police force]. While she was locked up there, she was not able to talk to us [the defense], and she was only allowed to meet with her family twice. Following a January 8 communique that was subscribed by more than 200 organizations, both national and international, she was granted house arrest.

As you mentioned, Vannesa is accused of assisting in the termination of a pregnancy of a 13-year-old girl who had been raped.

Vannesa’s case is very complex. From the moment I was called to defend her, it was clear to me that the case could represent a turning point. It has all the ingredients to put the issue in the public arena and to shake the foundations of Venezuelan conservatism and false feminist politics.

Unfortunately, over the past few years, there has been no real policy plan to promote gender equity. Some steps were taken under Chávez’s mandate. However, those were the unilateral decisions of a single person, and they did not change the existing conservative and misogynist structures.

Here, what should have been a trial for the rape of a 13-year-old girl turned into an indictment for assisting an abortion. In fact, as far as we know, the rapist remains free!

In all of this, the most infuriating issue is that the authorities, even though they were aware of what was happening and knew that a human rights defender [Vannesa Rosales] was locked up, did not intervene. The perspective of the police and the judicial system is sexist and patriarchal. State institutions are ignorant of women’s human rights.

What is worse, they didn’t even have enough empathy to consider what would have happened if their own teen daughter became pregnant as an outcome of rape. They applied the full weight of the law for two reasons: because this 13-year-old girl and her mother were vulnerable people who had no support, and because they saw an opportunity for extortion.

Thus, the key elements in Vannesa’s case are legal and social ones. At the end of the day, we are once again talking about the criminalization of poverty. Right now Vannesa is under house arrest, pending a preliminary hearing.

Could you explain the case in greater detail? Can Vannesa give declarations, and are the legal proceedings on schedule?

In principle, Vannesa could give declarations, but given the complexities of the case, anything could harm her defense. Additionally, the legal proceedings are under judicial seal for now, so we cannot give many details about the case.

However, I can offer a brief history. Vannesa was arrested on October 12, and on November 30 the Attorney General’s Office filed the accusation. After the accusation has been submitted, the law establishes a 20-day statutory period – 15 days plus 5 days extension if necessary – to proceed with the preliminary hearing. It is now mid-February and we do not have a date for the preliminary hearing. Thus, Vannesa is facing procedural delay.

As it turns out, we are in legal limbo: a Supreme Court’s communiqué states that the time limits established by law do not apply because of the Covid-19 quarantine, while another communiqué states the opposite. Meanwhile, Vannesa is being detained and in a situation of huge legal uncertainty.

Unfortunately, as a lawyer, I can tell you that procedural delay has become all too common in Venezuela. The justice system is in crisis. In a report that we put together about Vannesa’s case, we found at least eight violations of due process and even breaches of the Constitution. The problems that we face with her defense are not unique.

In any case, we are pressing for the preliminary hearing and working on the defense strategy, which I cannot explain here for obvious reasons.

Who is Vannesa Rosales? What can you tell us about her life and work?

Vannesa is a 31-year-old teacher. She studied pedagogy and committed her life to education. For eight years now she has been working in the Pueblo Nuevo barrio in Mérida, where she is a professor and the coordinator of various “learning nuclei” for the Universidad Territorial de Mérida. She focuses on reinserting children and adults into education, both at the pre-university and university level.

Vannesa is also a committed activist and defender of women’s sexual and reproductive rights.

The struggle for legalizing abortion has been going on for a long time in Venezuela. However, Vannesa Rosales’ case has reactivated people and movements here. It has the potential to bring together diverse feminist organizations with one shared goal: the decriminalization of abortion. What are your thoughts on this matter?

We do think that Vannesa’s case could mark a turning point, and we are working to coordinate and connect the country’s feminist organizations. Indeed, there are differences within the feminist movement. We are diverse and that must make us stronger and more resilient.

We must act as a bloc while we continue working each in our different fronts and with our different positions. We have to recognize each other in order to achieve unity and exercise effective pressure on conservative factions, both governmental and non-governmental – decriminalizing abortion is our common objective now.

Of course, if we succeed, it will be thanks to the foundations built by the first generations who initiated the struggle for legalizing abortion. In fact, we continue to learn from the feminist movements of the 70s and 80s, and we are aware of the advanced position that the Venezuelan Medical Federation held at one time.

This is a moment with great historical potential, a golden opportunity. However, there is one caveat: we will only achieve our objective if we all come together.

Vannesa’s case has brought the issue of decriminalizing abortion into the public arena. There are several factors here [that make it especially important]: first, the particularities of the case; second, the collective pressure exercised through social networks; and, third, the media coverage, both here and abroad.

I am hopeful. For the first time, the different elements within the feminist movement are coming together. We want Vannesa free, but this struggle is larger and has historical proportions. The time is now: we must defeat legislation that is backward when it comes to women’s sexual and reproductive rights.