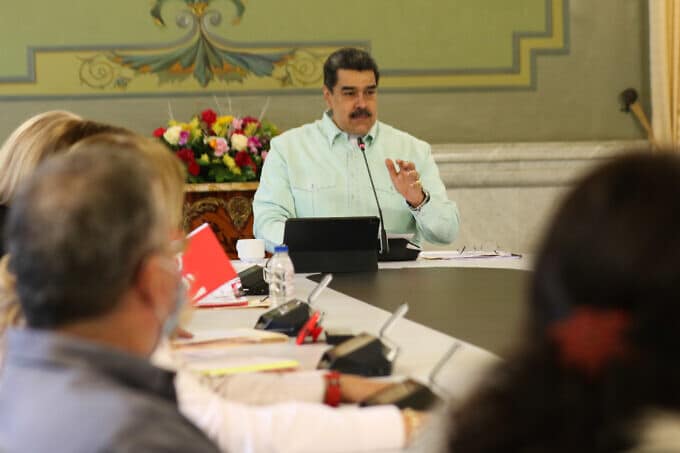 This Wednesday, February 22, the president of Venezuela Nicolás Maduro expressed his support to his Russian counterpart, Vladimir Putin, after Moscow recognized the independence of the republics of Donetsk and Lugansk. The president reiterated: “Venezuela announces its full support for President Vladimir Putin, in defense of peace in Russia and the region, and in the brave defense of his people and his homeland. All our support for President Putin. All our support for Russia.”

Maduro, through the state TV channel Venezolana de Televisión, said that: “We have been attentive to the events in Russia and in Ukraine, and we have been observing, not just now, but the whole evolution of the process where the North American empire and NATO intend by military means to end Russia, and to end this multipolar world that is already a reality.”

RELATED CONTENT: Is the Crisis in Ukraine the Beginning of a New World Order?

The head of state insisted that the United States “since the emergence of the leadership of President Vladimir Putin, has been preparing a strategic policy to surround, threaten and finish off Russia militarily,” and affirmed that “Venezuela announces all its support in defense of Russia”.

Maduro commented: “Putin has managed to recover in a decade, already by 2010 Russia showed signs of economic, financial, energy, and military strength. In a decade he achieved a record in the positioning of Russia as a new power for peace, as a new power of the multipolar world.” Maduro also said that it was then that NATO began to breach the previously established agreements on the non-expansion of its military forces “in an offensive scheme” towards Eastern Europe.

“Plans to militarily encircle Russia”
Commenting on the crisis around Ukraine, Maduro noted that Donetsk and Lugansk were initially forced to declare themselves people’s republics due to the persecution of Russians and minorities in Ukrainian territory.

The president said: “The Lugansk Territory and the Donetsk Territory assumed the functions of People’s Republics to defend themselves from a massacre that the fascist sectors, which had seized power in Ukraine, began to carry out. Hunting men, hunting women, assaulting families, bombing with heavy weapons.“

Maduro reiterated that during “all the stages” of this “extremely harsh conflict” in the region, “the diplomatic proposal, calling for dialogue, of President Putin has always been present,” from which the signing of the Minsk agreements emerged and were established to guarantee peace. However, these were “ripped to shreds by the neo-fascist ruling elite of Ukraine.”

The Venezuelan president stressed that, in addition, his Russian counterpart has repeatedly tried to engage in “direct dialogues with the rulers of Ukraine to establish bases of understanding and resolution to conflicts. However, the fascist elite that carried out the coup in Ukraine, and the groups that have taken power in the country, on different occasions have stayed away from diplomacy, respect, and dialogue, preferring to join plans to surround Russia militarily and act aggressively.”

President Maduro asserted that Moscow has repeatedly denounced before the UN Security Council the fact that “they are intending to surround Russia, point all NATO weapons at them so that at some point the conditions arise to attack and destroy them. And what does the world want? That President Putin sits by idly, that he does not act in defense of his people?” The Venezuelan president asked himself, emphasizing his support for the Kremlin and the Russian peoples.

On Monday, Russian President Vladimir Putin announced his decision to recognize the independence of the Donetsk and Lugansk People’s Republics, after which friendship, cooperation and mutual assistance agreements were signed between Russia and both republics. Putin recalled that at the moment “practically not a single day passes without Ukraine bombing the localities of the Donbass.”

At the same time, the Russian president ordered the Ministry of Defense to guarantee the maintenance of peace by the Russian Armed Forces in both republics.