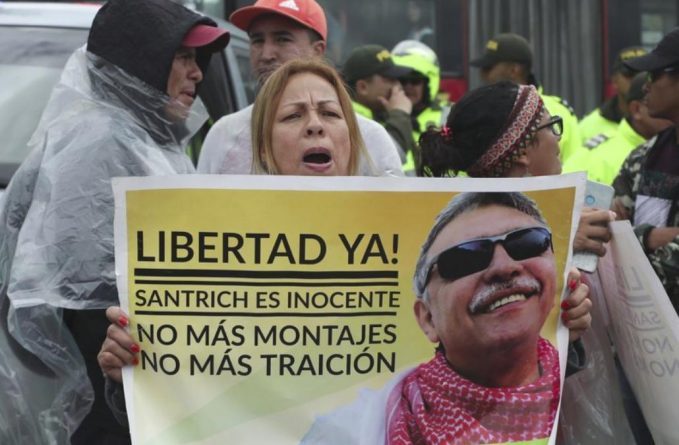 Colombia’s Supreme Court ordered the immediate release of “Jesus Santrich” on Wednesday after removing the prosecution from the investigation into a vague US drug trafficking charge.

The Supreme Court assumed full control of the investigation after the State Council confirmed that the former guerrilla chief is a member of Congress and as such can only be investigated by the top court.

The decision was rejected by President Ivan Duque, who insisted at an event in the capital Bogota that “Santrich is a mafioso.”

The FARC chose Santrich to become the former guerrillas’ leader in the House of Representatives in August 2017 after laying down their weapons as part of a peace process.

The court noted that the Colombian prosecutor’s office is not competent, because Santrich has congressional immunity. Now it will be this court that investigates it. The court made the decision to consider that the decision of the Council of State that maintained the Santrich seat maintains its investiture with parliamentary immunity, for which reason “in this condition it must be prosecuted criminally by this corporation”, that is, by the Supreme Court.

The unanimous ruling comes exactly two weeks after the war crimes tribunal also ordered the release of the FARC leader on claims it had seen no evidence to determine whether or when Santrich would have conspired to traffic drugs as claimed by the US Department of Justice.

In today’s ruling, the high court said that the ex-leader of the FARC has immunity in spite of not having taken office as a congressman, so “it resolved the reinstatement of Hernández Solarte’s freedom in the face of decisions of officials who had no competence for his apprehension “on May 17 in Bogotá.

With the ruling in the second instance, the court confirms its position that the former commander of the Revolutionary Armed Forces of Colombia – Ejército del Pueblo (FARC-EP) keeps his seat in Congress until his extradition process to the United States is resolved.

The Supreme Court’s intervention is the latest plot twist in a non-fiction judicial thriller that has resulted in investigation orders into the prosecution, prison authorities and the US Drug Enforcement Administration (DEA) over alleged misconduct.

Santrich was arrested in April last year after US authorities filed an extradition request on claims that the virtually blind FARC leader conspired to traffic drugs.

The US Department of Justice, however, refused to surrender evidence. Audio released by the Prosecutor General’s Office indicated that the FARC leader was deceived by a DEA informant.