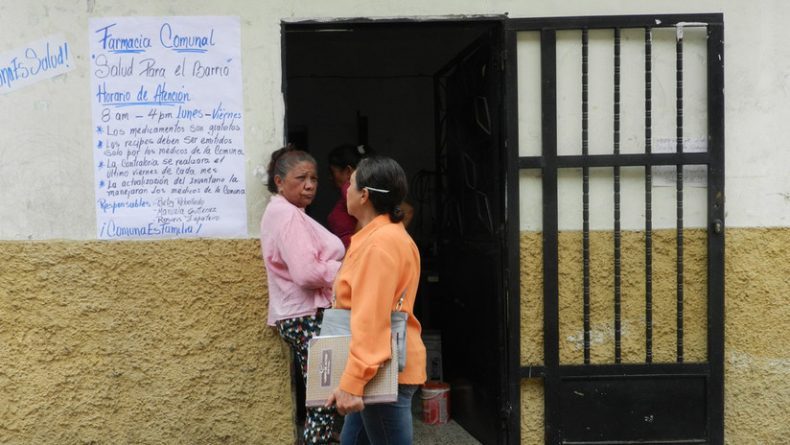 This initiative, which is led by a group of women from a Venezuelan commune together with a Chilean doctor, proposes a different scheme of patient care and distribution of medicines.

This 26-year-old woman, member of the ‘Communal Power and Union Council’, is part of the ‘ Health and Social Protection Bureau ‘, along with 19 other women who belong to six other communal councils, which make up the ‘High Council of Lidice’, located in the parish of La Pastora.

In Venezuela, the commune is a political, social and geographical organization, promoted by the late President Hugo Chávez , where organized popular power promotes its public policies and develops its productive projects.

Where do the medications come from?
The hands of Betsy, who will be at the front of the pharmacy, do not stop arranging packets of tablets inside a shelf.

Dr. Roberto Bermúdez, Chilean deputy doctor of the coordination of the ‘Carlos J. Bello Comprehensive Community Health Area’, directed by Dr. Dulfa Perozo, behind the screen of a laptop, states that they have received 311 donations of medicines, the product of an international collaboration managed by the commune.

Remember that in a trip he made to his country, he “tied together many wills” and that “that allowed us to receive regular donations beginning about two months ago”, contributed by a group of Chilean doctors who studied in Venezuela.

Drugs and supplements arrived initially at the Dr. Allende Foundation, which legally donated to that commune of Caracas, with which it works and which is made up of a population of 6,096 inhabitants .

The classified drug data is as follows:

How does it work?
If you imagine that outside the pharmacy ‘Salud para el pueblo’ there will be a line of people waiting with a prescription in hand, you are in error.

The community integral doctor Marian Blanco says that they want to break with that image that has become common before the shortage of some medicines in the South American country.

He explains that previously a comprehensive assessment of the patient is made, a treatment is indicated, which is not only pharmacological, the pharmacy inventory updates are checked and prescriptions with special characteristics are issued.

In the commune there are three consultation rooms where the same number of community doctors work. Patients who have priority are those bedridden and those whose medications are indispensable.

In the case of not having an inventory, an “open prescription” is made and the patient is told in which establishment it can be found.

Pharmacy in action
This inauguration is not preceded by a ribbon that is cut, with photo flashes and applause. Without further ceremony, the women’s team and Dr. Roberto say a few words before leaving Manuela’s house and take a picture at the door.

The opening begins with the visit to three patients in bed. The doctor, who belongs to the ‘Community Forest Council Lídice’, the highest in the area, launches up the slope, along with Barbara and Maritza, up the hill so often climbed.

The higher up, the more labyrinthine the path made of steps becomes. Facing, the mountain that marks the north of the capital, furrowed by humble brick houses and zinc roofs. Everyone greets the doctor on her journey. She stops, clarifies doubts and continues.

She stops at the first house planned for the trip, enters the patient’s room, talks for a while and gives him the medicines. So continues a long walk through the neighborhood to a second home where children and cats come to receive her. A grandmother sitting on a bed is excited to see her, explains how she feels and receives the tablets.

Finally, she arrives with the other two women at the threshold of the third stop where a grandfather, who got his wheelchair thanks to the Social Mission José Gregorio Hernández (which serves people with disabilities) receives a packet of painkillers. The pharmacy has made its first deliveries.

The doctor jokingly says that these donations are not part of the “humanitarian aid” that the opposition deputy Juan Guaidó intended to send Venezuela from Colombia last February, nor – speaking seriously – with the humanitarian technical assistance recently sent by China, Russia , Cuba and by international organizations such as the United Nations and the Red Cross.

After the worsening of the crisis, after the self-proclamation of Guaidó as “president in charge”, the Venezuelan authorities have received tons of medicines and medical supplies for the state health system.

The commune has not yet requested them because it wants to demonstrate with this first experience that the popular power can administer them in a “scientific, fair way, without patronage, without cronyism, without corruption,” she concludes.

Raise the mood
A pharmacy would be understood as a natural project of a commune if it did not have as background a more urgent situation: the unilateral sanctions that have prevented the importation, by the State, of medicines for Venezuelans, for some 16 million euros.

“Given the lack of medicines, we decided to organize ourselves,” says Rosiris Zapateiro, a Colombian educator from the Coromoto de Dios Community Council.

She affirms that her work in the commune is spontaneous and in solidarity. “We have no benefit, it is a product of the need caused by the blockade,” she adds.

While she speaks, she refers to the strength that is generated when she joins her companions to “raise the spirits of the community”, which feels the onslaught of the economic situation.

“We are struggling to get ahead, ” she says and confesses that, although they are a group of “warrior” women, when they feel that they are weakening, they rely on the bond they have as a family.

Previous tours
A year ago, when the ‘Board of Health and Social Protection’ of this commune was formed, its members drew a series of objectives, whose fulfillment resulted in the inauguration of this pharmacy that has the name ‘Health for the neighborhood’.

In the space of several days, these women along with the doctors, made tours of the areas that comprise the seven communal councils. They visited patients, consulted their medical reports, made diagnoses, saw what drugs had been prescribed for them. Three months later, they already had the data systematized.

“The pharmacy arose because we saw that our methodology was good, and we checked it with the arepazos”, explains the doctor. In this activity, more than 100 children of the seven communal councils were seen, vaccines were administered, nutritional and pathological assessments of the children were made and their levels of schooling were recorded.

Alejandra Trespalacios, from the ‘Poder y Gloria Community Council’, recalls her work in data collection. “I was surprised with what I saw, how some people live in very vulnerable conditions, I went into places I did not know to detect the needs we had,” she recalls.

When asked the reason for the overwhelming female majority at the health table, she states that they are there because they have the knowledge of mothers and grandmothers. “We are all women: they have not seen us in action,” she says with a laugh.