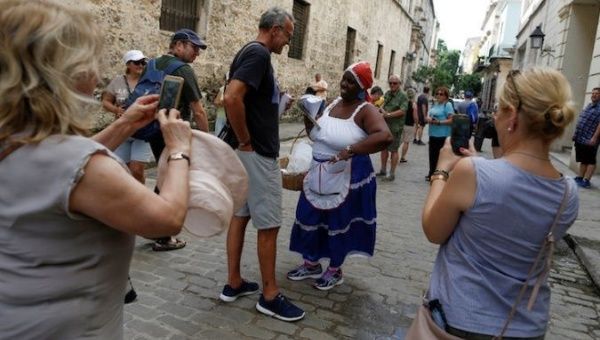 “Cubans should not be used as political pawns. They are human beings,” said James Williams, president of Engage Cuba, a political activist group.

As of June 5, U.S. citizens will be prohibited from making group educational and cultural trips known as “people to people” travel to Cuba, Secretary of Commerce Steve Mnuchin of the U.S. Treasury Department confirmed in a statement Tuesday.

According to the commercial director at Cuba’s tourism ministry, Michel Bernal, the island nation received about 250,000 U.S. visitors in the first four months of 2019, which represented a 93.5 percent increase from the same period in 2018.

For the time being, commercial airline flights and travel for university groups, academic research, journalism and professional meetings will continue to be allowed.

In response to the new sanctions, Cuba Foreign Minister Bruno Rodriguez wrote on Twitter that he “strongly rejects new sanctions announced by the U.S., which further restrict U.S. citizens’ travels to Cuba, aimed at suffocating the economy and harming the living standards of Cubans in order to forcefully obtain political concessions. Once again they will fail.”

The “strategic decision to reverse the relation of sanctions and other restrictions” limiting Cuba-bound travellers was fueled, allegedly, by the belief that the foreign government’s principles play a “destabilizing role in the Western Hemisphere”. However, Mnuchin admitted that the decision was just one of many tied to the battle being waged against Venezuela’s government — which is supported by Cuba, Nicaragua, China, and Russia, among others.