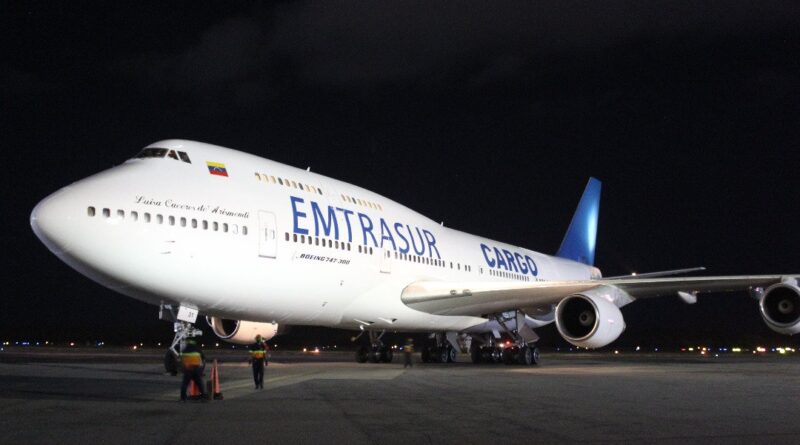 Last Friday, February 11, the Aerocargo del Sur Transport Company (Emtrasur) made its inaugural flight with its Boeing 747-300 F aircraft, travelling from Minsk, Belarus to Caracas, Venezuela. It contained 24 tons of medicine, 17 of which were donations from Belarus.

This can be considered as a new development in Venezuela’s commitment to guaranteeing an air cargo service that promotes a crucial development of import and export activities.

RELATED CONTENT: Venezuela Authorizes Flights to and from Portugal

Back in November 19, 2021, the Venezuelan government first announced the project that today has become a reality. As César Pérez, general manager of cargo and operator of the new state-owned enterprise explained, “due to the strategic need that we have as a state, the need arose for the acquisition of a cargo aircraft, such as the Boeing 747-300 F. It has a capacity of 90 tons and 600 cubic meters, and will allow us to carry out an airlift with our allies in Asia, China and even the Middle East. It will allow for a range of opportunities for our exporters, to make our products known, and also to facilitate imports at a very low cost compared to the competition, to place products here in Venezuela with affordable rates from abroad. El Libertador Air Base in Maracay, Aragua state, is going to be the Cargo hub.”

This first flight was celebrated by the Venezuelan Minister for Transportation, Hipólito Abreu, who in a message posted on his Twitter highlighted that this effort is a step in the right direction to “strengthen Venezuela’s strategic cargo transportation capacity.”

According to data obtained by Aviacionline through ch-aviation.com, the aircraft is 36 years old, with more than 84,000 flight hours in more than 14,000 operated cycles, and was delivered to UTA—Union de Transports Aériens in France—in January 1986. It operated until the closure of the company in 1992, when it joined Air France.

The aircraft, registration F-GETA, was withdrawn from service in 2006 and sold to Mahan Air, in Iran in 2007, where it operated under registration EP-MND. The 747-300 is already registered with its Venezuelan license plate YV3531 and was named Luisa Cáceres de Arismendi.