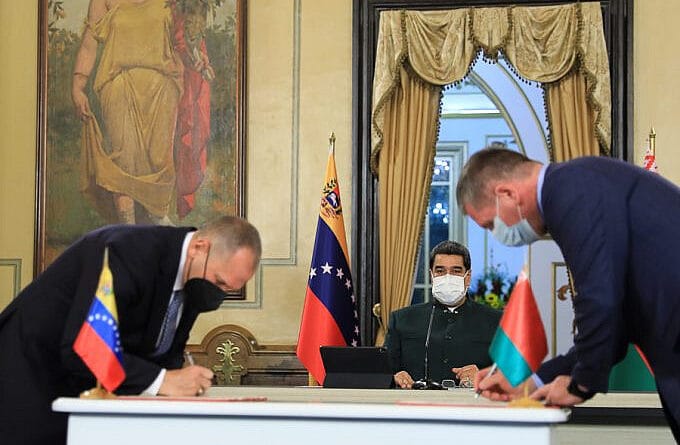 This Friday, December 17, the governments of Venezuela and Belarus signed several agreements at the closing event of the Eighth Meeting of the Venezuela-Belarus high level mixed commission, in order to consolidate strategies for the benefit of both nations and for strengthening cooperation relations. At the Simón Bolivar room of the Miraflores Palace, the President of Venezuela, Nicolás Maduro, stressed that Venezuela “is taking a successful step in the right direction, with the pace, speed and intensity that is needed,” by signing agreements that will allow the development of different sectors of the national economy.

These agreements aim to strengthen food production, commerce, petrochemical production, as well as the reactivation of the truck and agricultural machinery factory in Barinas. “We are in search of the new non-rentier economy, with a quality national market,” stressed President Maduro.

In context, he ratified that Venezuela should seek new international markets to increase the productivity of joint ventures, while highlighting that 2021 was the best year for the country’s economic, social, cultural, and athletic development.

This signing of agreements outlines a roadmap between Venezuela and Belarus for the progress of both nations, in addition to the consolidation of Venezuela’s real economy.

In this sense, he reported that one of the signed agreements was about air transport between Venezuela and Belarus, which will connect Belarus to South America and the Caribbean; “and Venezuela will connect with the world through Belarus to transport tourists and strengthen the real economy.”

The purpose of this high level commission, which was formed on December 15, 2021, is to analyze and strengthen strategic areas such as agribusiness, science and technology, energy, infrastructure, transportation, and housing, among other productive sectors.

In the signing ceremony the Venezuelan president was accompanied by Ricardo Menéndez, minister for planning; Adán Chávez, special envoy of Venezuela for Belarus; Víktor Vladimirovich Sheiman, head of the delegation and special envoy of the Republic of Belarus; Dmitry Kharitonchik, Belarusian vice-minister for industry, and other officials.

Security agreement
Among the agreements made in the security area, Menéndez highlighted that the two countries are studying “the maximization of the use of the optical factories that had been installed with Belarus in the past.”

In the same area, Menéndez added that it was proposed to incorporate artificial intelligence monitoring mechanisms for greater efficiency in the protection and security of citizens throughout the Venezuelan territory.

Industrial agreement
In his report, the minister of Planning pointed out that the relaunch of the Santa Ines Industrial Complex, located in the state of Barinas, is being evaluated. This space brings together factories that have the capacity to produce more than 5,000 trucks and 10,000 tractors. “This automotive industrial complex from the point of view of trucks is the largest that exists in Venezuela.”

The complex will supply 66% of the total national demand for these machinery necessary to have food security and sovereignty.

Transport agreement
In terms of transportation, the agreements will directly impact the fleets used for heavy cargo and passengers that have been notably affected by European and Washington blockade. In addition, Minister Menéndez stressed that Belarus’ experiences in the railway area will be studied in order to incorporate them into Venezuela’s national railway plan.

Housing Agreement
Menéndez pointed out that regarding housing, agreements have been signed for the resumption of construction of more than 8,000 houses, work on which had already started before any of the agreements. “There is a very important boost to complete the works and remaining houses,” he said.