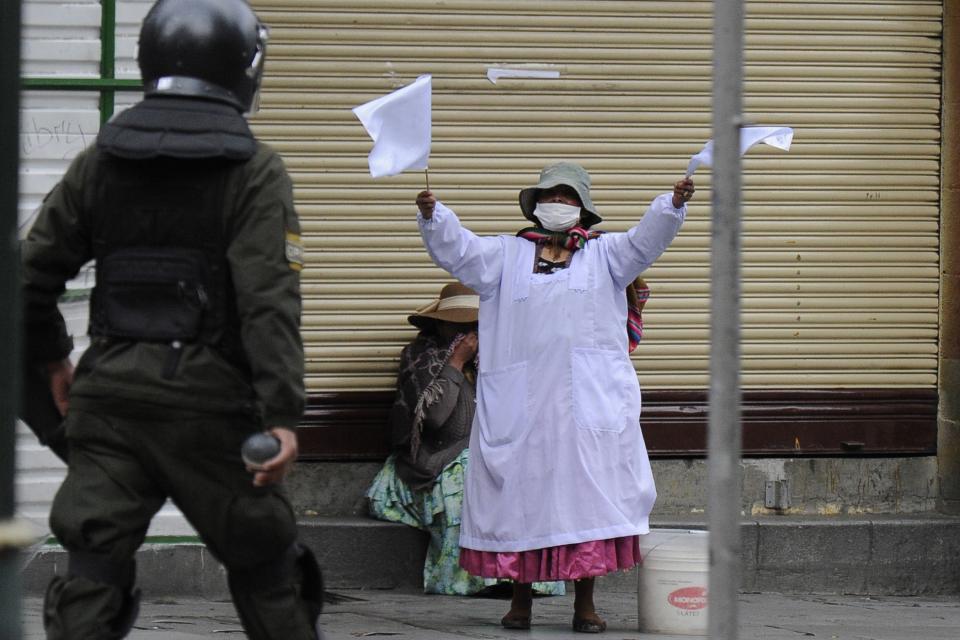 Events are occurring at a startling speed in Bolivia. The bloc heading the coup d’état has a series of steps to carry out and they are accomplishing them. One of these steps was Añez’s self-proclamation, a bible in hand and with the presidential sash bestowed by the Bolivian Armed Force. The following step occurred on Wednesday while pretending to have a Government, that is to say, beginning to give orders. These steps face a paradox because while they are trying to pretend that there is a new Administration abiding by the laws, the unconstitutional way they are doing it proves the dimension of the coup d’état. It is evident not only among analysts, political parties and diplomats but also among a part of the population, who see the self-proclamation as something impossible to be any way justified democratically.

This conflict was reflected in the uprising in El Alto (Bolivia’s second-largest city, located adjacent to La Paz), on Monday, that turned into a mass open air town hall on Wednesday in which citizens decided to go down together to La Paz. The amount of people mobilizing is increasing, as well as their radicalism. The situation in that key territory in Bolivia’s history and political dynamics is a representation of tensions and unities. On the one hand, mobilizations agree on two undisputable aspects: defending the Wiphala flag, abused by coup plotters – “this is the Wiphala revolution,” said an Aymara leader – and removing Añez, who said the most racust anti-indigenous statements, from her illegal presidency.

On the other hand, there is an aspect being debated and that is Evo Morales’ return. A sector is chanting for it, demanding it and fighting to make it a reality; another sector is claiming they do not belong to Morales’ Movement to Socialism (MAS) but that there cannot be distinctions among Masistas at least not in the face of a coup d’état that is persecuting, repressing and murdering all of them alike. Events seem to be an increasing spiral in which police violence is fueling the uprising. Two deaths – possibly three – have been reported in El Alto and the repression that extended for hours on Wednesday is increasing the already evident separation: El Alto, the Wiphala, indigenous nations against the coup d’état headed by those who despise and humiliate them.

Coup leaders are trying to send messages in the face of this clear separation, such as placing Wiphalas in military tanks or releasing video recordings with messages from Fernando Camacho – main civilian and business face of the coup – together with Añez affirming they are united and respecting diversity as the Wiphala. Their messages are not getting their desired effect and the process to create a resistance movement is progressing. Not only in El Alto but also in rural areas, with local demonstrations in roads, cities, and others are moving towards La Paz, such as the Aymara Ponchos Rojos militia who arrived in the city last Wednesday. Is a siege on La Paz possible? This is one of the greatest fears on Thursday. Fear is precisely what moves those who support the coup, they are celebrating and organizing themselves in their middle class, wealthy blocs to defend themselves from invasions of natives and citizens of El Alto. Fear and revenge are the two main driving forces for the coup. Ousting Morales had several objectives, among them trying to create a country for the ruling classes with a vision of Bolivia governed by them and for themselves.

They are moving towards that objective. Last Wednesday night there were eleven ministers appointed in the new Cabinet, following repression and news about casualties. According to some newspapers, one person died in Montero and another in Yapacani, in Santa Cruz province. News about repression, persecutions, detentions, gunshots against demonstrators has spread in the social media, but impunity seems to have no limits amidst speed, censorship, the breach of law, and the lack of government. Who was commanding Bolivia’s Armed Forces up to last Wednesday night? Who is commanding the right-wing armed groups with lists of Masista people to be murdered? The process to consolidate the coup d’etat in Bolivia is advancing and it’s backed abroad.

Besides the United States Administration and the Organization of American States Secretary Luis Almagro, Añez’s self-proclamation was recognized by the Colombian Government and the European Union High Representative for Foreign Affairs and Security Policy, Federica Mogherini. The next step for the coup is to move towards the legislative body, where the MAS party has majority in the two chambers. Meanwhile, the resistance movement is growing with a series of demands, anger, power, and uncertainty about their direction and a strategy to face the coup.