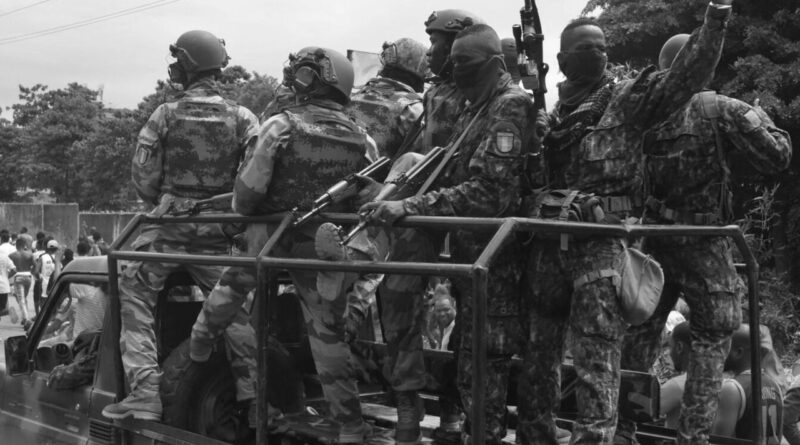 Uncountable are the editorials in every American and European newspaper and magazine of note adding to this vocabulary of gigantism and apocalypse, each use of which is plainly designed not to edify but to inflame the reader’s indignant passion as a member of the “West,” and what we need to do. Churchillian rhetoric is used inappropriately by self-appointed combatants in the West’s, and especially America’s, war against its haters, despoilers, destroyers, with scant attention to complex histories that defy such reductiveness and have seeped from one territory into another, in the process overriding the boundaries that are supposed to separate us all into divided armed camps.-Edward Said, 2001

In the era of rising multi-polarity, the imperialists seek to divide the globe into two worlds: the one where the NATO bloc’s “democracy” holds sway, and the one where China and Russia’s “authoritarianism” is in control. It doesn’t matter that the U.S. provides military assistance to three-fourths of the world’s dictatorships. Or that Washington is complicit in backing the atrocities of Nazi-aligned “democratic” regimes like the ones in Ukraine and Colombia. Or that the U.S. has the world’s worst prison system for human rights, an increasingly militarized and deadly police state, and a “democracy” which is a corporate-run farce. This idea that Washington leads the “free world” must be uncritically accepted, just like during the previous cold war.

To fortify this counter-factual narrative in the face of mounting contradictions, the U.S. empire must enforce an ever-intensifying paradigm of censorship and propaganda. The baseless narrative that China is committing a “genocide” against the Uyghurs must be coupled with efforts to deplatform media outlets like The Grayzone, one of the few publications which challenge the imperialist media’s distortions surrounding Xinjiang.

In the social media age, this campaign to control the flow of information has taken on a more totalizing form than was the case when the CIA started covertly influencing the media during the Cold War. Now the CIA—which gained the official legal authority to covertly plant stories within U.S. media in 2013–can propagate its lies about Xinjiang “concentration camps” and supposed north Korean public executions within digital media. Which then gets pushed onto the public through social media algorithms that have been manipulated to promote “authoritative” sources like the New York Times.

The internet has also been weaponized to snuff out those who are most reliably doing journalism. In the last five years, Google has systematically suppressed search results for socialist and anti-war websites. And in the last year or so, The Grayzone, MintPressnews, and other anti-imperialist outlets have been blacklisted on Wikipedia by a group of Venezuelan regime change operatives on explicitly political grounds. Since Russiagate kickstarted media hysteria about “fake news” and “Russian interference,” this kind of corruption for the sake of informational suppression has become casual within the functioning of the internet.

The Web as we initially knew it has been dismantled. It’s been replaced with a NATO bloc Great Firewall where social media companies, at the behest of the U.S. government, not just regularly censor alternative media but suspend prominent accounts from Venezuela, Syria, Iran, China, and other countries.

Whereas China’s Great Firewall is designed to stem the flow of the West’s constant online fascist propaganda, which the PRC is under no obligation to allow to run freely within its borders, our Great Firewall is designed to suppress information which can help us break out of the fascist worldview. That can show us China isn’t to blame for the pandemic, that the stories of DPRK “human rights abuses” have been fabricated for the purpose of inflaming Orientalist racism against Koreans, that the Uyghurs in Xinjiang are actually benefiting from the economic development of Socialism with Chinese Characteristics, that Cuba in fact has a democracy far more functional than our own “democratic” republic.

These and the other realities which could shake us out of the anti-communist worldview, and challenge our government’s geopolitical machinations, get preemptively erased from the consciousness. And those who expose the atrocities of the U.S. empire, such as Julian Assange, get tortured so that they can be made examples to other potential hard-hitting journalists.

This is the model that Washington’s more explicitly anti-democratic allied regimes from recent years have taken on: suppress dissenting material and brutally retaliate against those who try to report on the state’s abuses. After the U.S. carried out a coup against Evo Morales two years ago, Bolivia’s new regime targeted media outlets which challenged the pro-coup narratives (they didn’t even want anyone calling the affair a “coup”) and tortured journalists who reported on events like police brutality. This history shows that we in the core of the empire are subject to a repressive approach which mirrors that of a fascist Latin American junta.

Bolivia’s coup regime has been taken out of power, but the imperialists continue to carry out coups wherever they still can, and lately these coups have taken on an even more Sinophobic nature. This month, a U.S.-backed military coup happened in Guinea. U.S. forces even trained the soldiers who perpetrated the coup, and the motive behind this meddling was clear: to oust the previous government for its cooperation with China in Belt and Road Initiative infrastructure projects. Subtly, the U.S. media and the “humanitarian” NGOs have long been manufacturing consent for this coup; last year, U.S.-tied Human Rights Watch put out an interview titled “Displaced and Destitute as Guinea Advances Dam Project with Help from China.”

Its accounts of the impacts of the negative parts of the BRI project weren’t necessarily incorrect, but it portrayed the issue with an obvious bias wherein the BRI’s potential to bring electricity to millions of Guinea residents (as the BRI has already done in other parts of Africa) was downplayed. Now that this coup has happened, we won’t get to see the living standard increases that the BRI would otherwise have gotten the chance to bring to Guinea. The imperialists have halted the country’s progress towards joining the new, more equitable world that China is building. And this adds onto their parallel success in Mali, which had its hopes of BRI development dashed by its recent coup. This year’s coup in Chad, and the brewing potential for a coup in Niger, could also complicate the BRI.

As this violent sabotage of multi-polar progress unfolds, HRW and its backers are rebuilding the narrative precedent for a new coup in Bolivia; this week, HRW put out a statement that accused Bolivia’s new socialist government of unjustly prosecuting the coup regime leaders who had carried out massacres of protesters, and that even repeated the long-debunked lie from the Organization of American States about the socialists having perpetrated “electoral fraud” prior to the coup. Thankfully, Bolivia’s proletariat has shown itself to be too well-organized for the imperialists to hold onto power within the country. Which will eventually become the case for the proletarians within all the other countries where Washington has been meddling.

Featured image: Troops during this month’s coup in Guinea, which destroyed the country’s hopes of seeing the benefits from China’s Belt and Road Initiative.