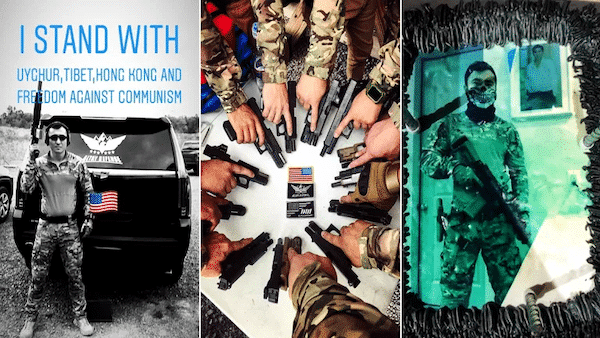 The events following the Afghanistan pullout are revealing the long-term goal of Washington’s rhetorical focus on the Uyghurs during recent years: to manufacture consent for a new U.S.-backed jihadist movement within Afghanistan, one that can be used to strike against China like how the Mujahideen struck against the Soviet Union.

The conditions surrounding this new anti-communist Afghanistan proxy war differ from those of the previous one. China isn’t stretched unsustainably thin, like the USSR was during the final decade of its existence. And China has no reason to get militarily involved in Afghanistan. But the Mujahideen war provided a template for what the imperialists can do within the country now that their utterly unsustainable occupation project has collapsed, and now that Washington has consequently experienced an international loss of perceived military credibility similar to the fall of imperialism’s hold over Saigon. The empire is increasingly desperate, and left with one option: to try to deepen Afghanistan’s instability through proxy terrorist organizations and intensified economic strangulation.

As Washington freezes Afghanistan’s wealth by applying its Taliban sanctions to the entire country, the empire and its proxy reactionaries throughout Eurasia are scheming about how to inflame fresh conflicts. In an article from last month, the right-wing Indian-centered publication Hindustan Times wrote about one of Washington’s Afghanistan proxies the East Turkestan Islamic Movement:

While the Chinese Communist Party (CCP) unlike the US and Soviets is not expected cross the Rubicon by becoming political or militarily active in Afghanistan, it will surely use its new friend, the Taliban, for taking action against some 500 East Turkestan Islamic Movement (ETIM) fighters whose goal is to liberate Xinjiang Uighurs from the yoke of Beijing. The ETIM fighters are mostly located in Badakshan province in north Afghanistan which links with Xinjiang in China via the Wakhan corridor. Even though the Taliban have traditionally a close relationship with the ETIM, the Pashtuns are concentrated in south and its is the minority Tajiks, Uzbeks, Hazaras, Uighur and Chechen who comprise the bulk of Taliban cadre in north Afghanistan. If the Taliban start harassing the Afghan minorities, it is these non-Pashtun elements who will join the core of Panjshir resistance in future. Already, intelligence reports from Afghanistan and Turkey indicate that the ETIM group will shift its allegiance to Islamic State of Khorasan Province (ISKP) as they fear Taliban will act against them and hand them over to the MSS, the Chinese secret service. It is for this very reason that China wants US to redesignate ETIM as a global terrorist group.

How do we know Washington is backing the ETIM? Because last year, the Trump administration took it off the U.S. terrorist group list, falsely claiming that there was no longer evidence for it engaging in terrorist activities. And since then, the group has undergone a massive increase in its financial resources, manpower, logistics, and firepower. Another red flag for U.S. support is the fact that the ETIM is a Uyghur ethnic nationalist organization, one whose goal is to fulfill the U.S. State Department’s vision of a Balkanized China where Xinjiang has become an ethno-state called East Turkestan.

RELATED CONTENT: In 2018 the US Was at War With Uyghur Terrorists. Now it Claims They Don’t Even Exist

The growing terrorist threat that the ETIM has been posing to China—a country Afghanistan borders—is no accident. Washington wants greater ethnic tensions and threats of violence within central Eurasia at all costs, because this is instrumental to Washington’s hybrid asymmetrical war against the PRC. Washington also seeks to keep the Taliban from providing stability to Afghanistan, which would allow China to expand the BRI into the country.

This rant by one of India’s Sinophobic fascists has revealed the way the imperialists hope the ETIM’s role in this plan will develop: the Taliban starts pushing back against the ETIM’s anti-China actions, then this results in ethnic tensions that likely get exacerbated by CIA propaganda (perhaps one which exaggerates the Taliban’s uses of force against the Uyghur militants), then the ETIM can get paraded in the imperialist media as a heroic group of freedom fighters. “Freedom fighters” who are doing nothing more than resisting the repression of the Taliban, and of the Taliban’s geopolitical partner China. Which has itself been accused (based on faulty research from biased far-right sources) of violating the rights of Xinjiang’s Uyghurs.

It’s how Washington has made Al-Qaeda and ISIS forces into being seen as heroic liberators within the Syrian conflict: cheer for the jihadists throughout the imperialist media, glorifying their acts of terrorism as righteous defiance against the bogeyman Assad. The Syria war propaganda campaign has required numerous false flag chemical attacks that have been blamed on Assad, and a sophisticated network of “humanitarian” NATO-backed terrorism assistants like the White Helmets. The equivalent approach will be applied to the proxy war against China.

Already, the imperialist media has been manufacturing consent for the ETIM’s accompanying proxy groups: the new generation of the Mujahideen, and ISIS. Last month, the CIA-tied Washington Post put out the headline “The Mujahideen resistance to the Taliban begins now. But we need help.” It was written by Ahmad Massoud, the leader of this anti-Taliban insurgency. Massoud’s rhetoric about seeking to advance human rights is suspect; he’s the son of the leader of the original Mujahideen, the anti-communist terrorist organization that turned into the Taliban. And he received his military training from Sandhurst, the U.K. imperialist academy that’s equivalent to West Point. Beneath the columns and interviews that this spokesman for Washington’s continued subversion efforts has been making in U.S. media outlets, a more clearly ominous movement is brewing.

To advance their effort to activate ISIS as a proxy force in keeping Afghanistan unstable, the imperialists have been simultaneously painting ISIS as an ally of the Taliban and avoiding opportunities to help the Taliban in fighting ISIS. As the anti-imperialist blog The Failed Revolution assessed this week, the media’s obfuscation of Washington’s role in giving rise to ISIS throughout the Syria regime change proxy war has been instrumental to this current stage in the propaganda campaign.

Observes the blog: “The Western propaganda in most cases equalized Taliban with ISIS. And even worse, continued to blame the Taliban for all the bad outcomes in Afghanistan, almost ignoring the presence of ISIS and its consequences. This is the result of a certain US strategy to make Taliban and ISIS appear as if they are close allies. And this is very far from truth and the real, very complicated situation in Afghanistan.”

This strategy of denouncing and working against ISIS only when geopolitically convenient just reached a new level of wishy-washiness. Even amid the chaotic current situation surrounding the withdrawal, the U.S. military has been wary of working with the Taliban to counter ISIS-K, citing those same disingenuous concerns about the Taliban somehow representing an equivalent amount of threat towards stability compared to the Islamic State. Washington’s present position on collaborating with the Taliban against ISIS is that it’s “possible.” Not a word choice that inspires confidence in Washington’s commitment to fighting ISIS following Washington’s immediate efforts to blame Afghanistan for last month’s attack at the Kabul airport—a charge that came in spite of the Taliban’s consistent cooperation in countering ISIS.

The Failed Revolution writes regarding this imperialist media narrative:

The whole thing resembles the alleged attack with chemical weapons by the Syrian army. The US and its allies rushed to blame Assad for such an attack against civilians to find a pretext to start the bombings. Why would Assad do such a thing when he was already winning the war against ISIS with the help of the Russians? And it has been proved that there were no chemical attacks. Plenty of evidence that the Western propaganda machine tried to bury. Even when the narrative of the alleged Taliban-ISIS coalition collapsed rather quickly, as it seems, the US military still hesitates to cooperate with Taliban against ISIS. That’s because it doesn’t want to…The US deep state will continue pushing Biden to stay in Afghanistan perhaps by changing the nature of the war. A proxy war against Taliban, frequent drone strikes and mercenaries of private armies will make sure that the country will never find peace and stability. The US empire and its war machine have lost many wars, but they are undoubtedly unbeatable in one thing: establishing permanent chaos and destruction wherever they go.

Purely in its last point, the article is wrong. Since 2017, the Communist Party of China has been able to keep Xinjiang from experiencing any Uyghur separatist terrorist attacks, contrasting the decades of acts of violence that Washington’s subversion efforts used to be able to frequently incite. China’s achievements in jihadist deradicalization, and in fostering the economic prosperity necessary for Xinjiang’s Uyghurs to not listen to Washington’s calls for violent anti-government revolution, have shown the U.S. empire is able to be stopped from perpetuating its chaos campaigns. This redoubled Afghanistan destabilization effort is a reaction to the success of the Uyghur deradicalization program, and to the recent shrinking of Washington’s territorial control over Afghanistan.