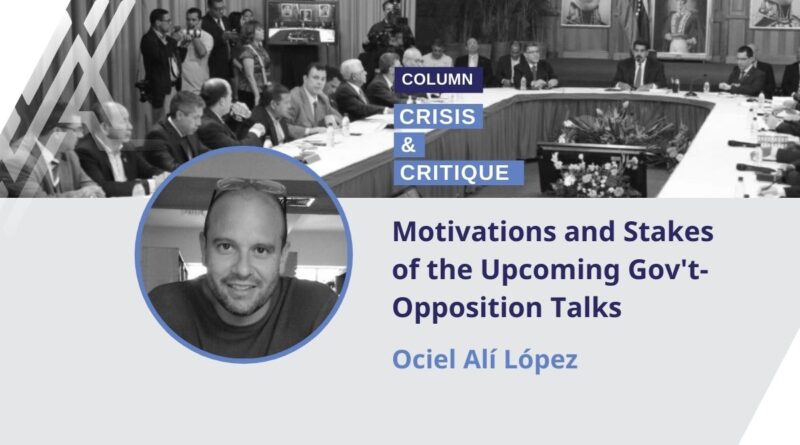 VA columnist Ociel López takes a look at the opposition’s motivation to participate in new rounds of talks with the government.

Talks between the Nicolás Maduro government and the diverse opposition groups are scheduled to be held in Mexico in August with mediation from the Norwegian government. These talks allow us to evaluate the current correlation of forces.

On the one hand, Maduro (who confirmed the ruling party’s participation) is very clear about his plan to sweep the November [regional and local] mega elections.

At the same time, the president has made important concessions to the opposition groups that want to participate in the elections by lifting bans against some candidates, eliminating protectorates (parallel government-controlled structures established in regions held by the opposition), and promoting a much more balanced National Electoral Council (CNE) with participation from radical opposition sectors.

In contrast, however, Freddy Guevara, a leader of Juan Guaidó’s Popular Will (Voluntad Popular) party, has been jailed and legal proceedings announced against other important figures from the same group.

Before sending a team to Mexico, the president has thrown a few punches: with the left hook he made concessions to legitimize the elections and with the right he hit hard against the radical factions.

Looking at the opposition, it is clear that it is divided in its demands, but all currents converge on the need to attend the talks.

Starting with the most radical opposition, Popular Will’s founder and leader Leopoldo López has already confirmed that he will be “represented” in Mexico.

Both López’s party and Guaidó’s “interim government” have continually based their rhetoric on ruling out any negotiation with the ruling party until “the usurpation ceases.” Guaidó has attempted to overthrow the government in a variety of ways, including violently attempting a military coup on April 30, 2019 and making constant calls for foreign intervention.

So why accept a dialogue with those who Guaidó considers “narco-terrorists,” “genocidal,” or “dictators”? What bargaining power does this opposition group have if it has not achieved a single goal of its own agenda? It is obvious that this opposition current will arrive to the negotiating table extremely weakened and practically dependent on the talks to survive and return to the political arena.

For its part, the moderate opposition ̶ which is considering participation in the November elections ̶ has achieved progressive and partial advances (which have in turn deepened divisions with more radical opposition groups). This moderate group has a much clearer objective: to conquer a respectable number of governorships and mayoralties, thus enabling it to consider competing in the 2024 presidential elections in the best possible conditions.

Why in Mexico?
Mexico is not exactly a “neutral” country for Venezuela’s radical opposition.

Andrés Manuel López Obrador’s (AMLO) government was one of the few in Latin America that did not recognize Guaidó [in 2019], even during a period of maximum attacks against Maduro coming from the media and the global establishment. He also invited the Venezuelan president to his inauguration, being one of the last times Maduro left the country to visit another president.

This position caused AMLO to receive severe criticism from the [Venezuelan] opposition, which quickly placed the Mexican president in a kind of Latin American “axis of evil.”

In addition, AMLO recently recovered the Latin American integrationist discourse and the Community of Latin American and Caribbean States (CELAC), as well as questioning the role of the [US-backed] Organization of American States (OAS). In “normal” times, Mexico would be considered an enemy of the pro-US opposition led by Guaidó and the proposed talks there would be boycotted by the White House.

As such, we can conclude that the acceptance of Mexico as a stage for the talks is further demonstration of the weakness of Guaidó’s interim government.

Guaidó led the opposition during this insurrectionary phase, but only the factions which are able to achieve good electoral results will be able to maintain control and project a powerful image in upcoming years.

Thus, Guaidó has no other options but to go to the talks, even if they are in Mexico, and try to move forward in his return to post-insurgency “political normalization.”

The US changes its course
Top spokespersons for the Trump administration consistently spoke against the possibility of reaching any deal with Maduro (and continue to do so from their political retirement). For them, negotiation was Maduro’s strategy to buy time.

The possibility that the then-candidate Joe Biden would end up meeting with the Venezuelan president was one of the ghosts that haunted the 2020 campaign, especially in Florida, one of the important swing states.

Once Biden was elected, he began a slow but sustained shift in search of a rapprochement with Maduro which has been carried out from outside his office but with his permission. This has forced both the most radical and more moderate opposition groups in Venezuela to change their perspective concerning participation. Many have been forced away from an openly insurrectionary strategy to one that seeks to occupy regional and local elected positions, preparing the stage for the 2024 presidential elections. Until recently, this seemed an unacceptably drawn-out scenario for them, especially after abstaining in the 2018 presidential election (which is beginning to be recognized as the worst mistake in living memory for any political opposition).

Without Washington’s blocking and without insurgent options, the talks stand a better chance of reaching a more productive conclusion than in the past. But there is another element that is exerting even greater pressure on the opposition to travel to Mexico.

Mega elections
November’s mega election is perhaps one of the most important elements forcing the opposition to participate in Mexico. This is especially so given that regional and local opposition politicians have pushed national leaderships to not allow electoral contests to be left to the ruling party.

Opposition abstentionism has allowed the ruling United Socialist Party to win an almost total majority in the National Assembly as well as the vast majority of local and regional posts.

For these local opposition leaders, boycotting the elections once again would mean being whitewashed from politics for the next four years and could even bring about a protracted political suicide. They have therefore put strong pressure on their national leaders, many of them in exile, to abandon the abstentionist policies once and for all and to seek minimum electoral conditions to participate.

This is the case, for example, of Daniel Ceballos, a former Popular Will mayor who was imprisoned in Táchira state [in 2014 on charges of aiding and abetting violent protests], but who launched his candidacy for governor last month. Ceballos has even accepted that the CNE organize the internal primaries for the candidacy, representing a 180 degree shift from his politically useless previous position of not recognizing the legitimacy of any of the country’s institutions.

Likewise, José Manuel Olivares, Guaidó’s “interim commissioner” for matters related to migration, announced his resignation from the post and has returned from [self-imposed] exile to launch his bid to the La Guaira state governorship. Carlos Ocariz, from the hard right First Justice (Primero Justicia) party, is also running for governor of Miranda state without his party, after its leader Julio Borges (Guaidó’s “foreign minister”) blocked his postulation.

Apart from these cases and the four incumbent opposition governors, there are hundreds of local opposition politicians who want to compete and get back on the electoral path.

This is the main internal pressure for the opposition to go to Mexico. However, opposition parties have not yet formalized their participation in the talks. They have also abandoned many of their local leaders, leaving them alone and often divided without mechanisms to find common candidacies. Should these groups manage to unite, they stand a good chance of defeating a Chavismo that has dropped votes of late.

For this reason, it is essential for the opposition to sit down with the ruling party. If in the midst of the uproar over Guaidó’s self-proclamation, the opposition saw possible negotiations as a sign of weakness from the government that should be avoided, now it sees them as being key to their own political survival. If the opposition fails to achieve better conditions, it may be reduced to its minimum expression, but if it decides not to participate in the elections, it would practically disappear from the political map.

So the opposition has no choice but to lower its maximalist programs and seek minimum agreements. Previous demands that Maduro resign now look ridiculous, and bringing forward the presidential election does not seem feasible, especially given the opposition’s weakness. Today, rightist organizations have been left without street demonstrations, foreign backers and even credibility in their own bases, who have been asked to abstain in the last three electoral processes.

In this way, the November 21 contests will be key to start evaluating potential future scenarios.

Featured image: What’s at stake in the government-opposition talks? Ociel López breaks it down. (Venezuelanalysis)