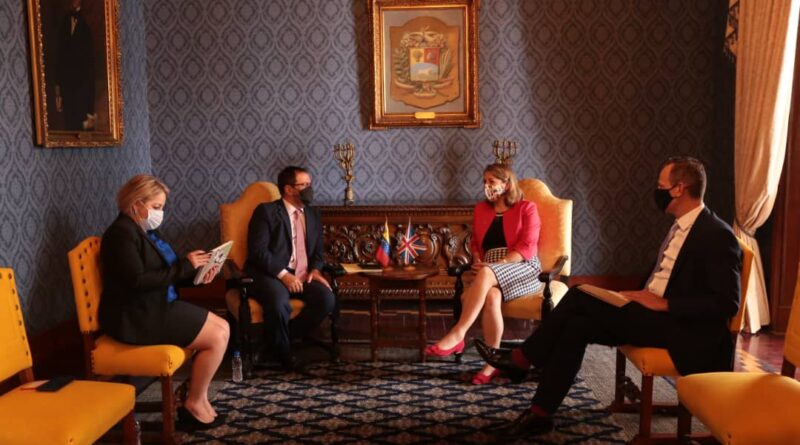 This was reported by the Venezuelan Foreign Affairs Ministry through a press release, indicating that Gil expressed to Buckingham Venezuela’s desire to improve the state of bilateral relations.

During the meeting, both diplomats talked about the historical and current importance of the relationship between the two countries as well as the shared interests.

The chargé d’affaires expressed her gratitude for the reception while indicating that it is her duty to improve bilateral relations. She also showed interest in learning about the dialogue with the opposition sponsored by the Norwegian government, to be held in Mexico, and about the situation in Venezuela.

Venezuelan gold seized by UK in the Bank of England
For more than two years Venezuela has been embroiled in a legal battle with London after the Bank of England announced its unprecedented decision of not recognizing the constitutional and legal government of Nicolás Maduro in Venezuela, instead recognizing the mock government promoted by Washington and led by the former deputy Juan Guaidó.

That illegal decision created a poor precedent for the international trust required by the Bank of England, but most importantly constituted a robbery of the Venezuelan people and State valued at more than $2 billion—much needed by Venezuela due to the harsh economic situation derived from the illegal US and European blockade.

The appointment of a new diplomatic head of mission in Venezuela contradicts a recent statement made by Boris Johnson insisting in recognizing the fictitious Guaidó government—that each day finds itself with fewer supporters—in order to justify the judicial decision formalizing the robbery of the Venezuelan gold.

Featured image: UK new diplomatic head of mission to Caracas, Rebecca Buckingham, was appointed by the government of Boris Johnson to the government of Nicolás Maduro, despite the fact that Johnson recently reiterated his recognition of the non-existent government of former deputy Guaidó. The UK diplomat held a meeting with Venezuelan Deputy Minister for Foreign Affairs Yvan Gil.