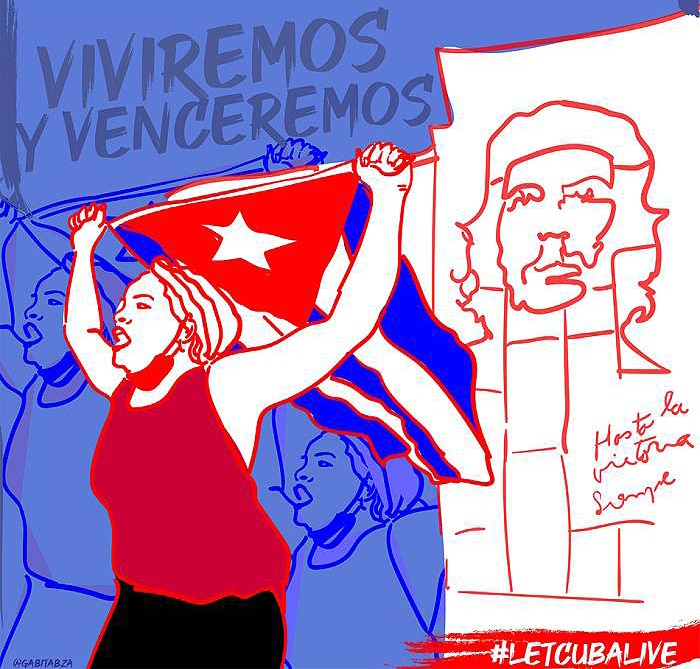 Novelist Mario Vargas Llosa has recently said in the pages of the Spanish newspaper El País that Cuba is a “military dictatorship,” and that he has reached that conclusion through information he received from “the chronicles of correspondents.” One can disagree with his opinion, but one must start from the understanding that for a writer of fiction, as he is, and one of the best, the truth is not the most important thing; and it is precisely the truth that has been scarce in the reports on Cuba by the mainstream media.

The press that has been demanding plurality from the island for decades has once again constructed a narrative that excludes any voice that identifies itself with the Cuban Revolution. And this time it has gone even further. From The New York Times to CNN, they have appropriated images of revolutionaries in the streets of Havana to present them as anti-government demonstrations. It is essential for them to do so because to speak of “peaceful protests” one needs symbols, such as the Cuban and July 26 flags carried by the revolutionaries in images infinitely attributed to the counterrevolution by the corporate press, and also ideas, such as those expressed in the posters that Fox News was kind enough to erase while interviewing US Senator Ted Cruz.

It is astonishing that those who those media present only as overwhelmed with blackouts and lack of drinking water, which also overwhelmed those who came out to defend the Revolution, did not express it in posters or slogans. Chanting “freedom”—the single word that according to Francis Stonor Saunders, author of the book The CIA and the Cultural Cold War, heads almost all of Washington’s propaganda projects—or choruses of songs manufactured in Miami through blackmail and extortion of musicians, at a time when COVID-19 has left many musicians without income from live concerts, is not exactly spontaneous expression. “Spontaneity” that has been evidenced by the advisor for Latin America in Joe Biden’s National Security Council of the United States, Juan González, when he told a Trumpist youtuber that the new administration will “continue to support those artists, those journalists” that he calls independent, in an oxymoron that should be collected in literature as the universal anthology of cynicism.

But Joe Biden could compete with Mr. González for the same compilation. After his government’s use of platforms like Twitter and Facebook to instigate violence in Cuba was exposed, Biden told cnn that “disinformation on social media can kill people.”

On the Cuba issue, the Democrat president is the most loyal of Donald Trump’s followers, not only for keeping in place the 243 measures with which the latter took care of plugging every loophole through which the Cuban economy evaded the economic war, but also for his alliances with the most Trumpist sector in South Florida.

This is the same Biden who campaigned by criticizing without quarter Trump’s policies, including the ones directed against Cuba, and had advocated sending to jail the demonstrators who took over the Capitol in Washington, on January 6 of this year, and their instigator who preceded him in office; but now it seems that the Cuban Trumpists of the digital networks instigating the takeover of the Capitol in Havana appeal to him.

Today it is well known that there was no spontaneity in San Antonio de los Baños, that there were people from Miami, whose names have already been published, who instigated and called for the protests. For months now, a price has been put out for vandalism and people have been paying for it with quotes on digital networks to stone a shop window or set fire to a patrol car, although unfortunately the media through which Vargas Llosa “informs” himself, and a good part of the world, continue to speak only of “spontaneous protests” and “peaceful demonstrators” in Cuba. They speak not a word for the university professors injured by the “peaceful” demonstrators, nor for the mothers, doctors and nurses terrified by the stoning of the children’s ward of the hospital in Cardenas, nor for the women at the Cuban embassy in Paris whose lives and those of their children were endangered when the “peaceful” instigators of July 11 attacked the Cuban diplomatic headquarters in France with Molotov cocktails out of frustration. Having failed to impose terror in Cuba, as in the 70s of the last century, they are once again trying to wage “war on the roads of the world,” carried out by characters of poor memory at the service of the CIA, whose sinister work has cost lives of Cubans and foreigners.

Those who have been announcing for decades that, as in the USSR, Cuban socialism would fall without the revolutionaries defending it have been contradicted by the facts and, pretending to forget their predictions, blame the Cuban leadership for the violence in order to cover up the defeat of their long-standing aspirations disguised as analysis. They silence Roger Waters, international music legend, when he defends Cuba, and amplify those who, with none of the artistic stature of Waters, say the same as Biden. How much do they care about art, how much about freedom of expression? Who is now the “docile employee of official thinking,” Waters or Vargas Llosa?

The imperial aggression against Cuba is stronger than ever. Democrats and Republicans, all of them pro-Trump when it comes to crushing Cuba, have united around it. The tightened blockade and the induced violence provides the raw material for the scribes who are paid in dollars to translate what the empire wants as their own ideas. However, what will always be decisive will be what we do here, joining all patriots and all honest people in Cuba and the world.

As it was on August 5, 1994, July 11 must be a turning point for those of us who defend the Cuban Revolution. It is not enough to defend it for one day from the imperialist plots, but to defend it every day as we face our insensitivities, dogmatisms and mediocrities. It was in the hardest moment of the Special Period that Raúl toured the country to critically analyze the work which the main cadres of each territory faced during those adverse circumstances and with an energetic “Yes we can,” together with the firm and intelligent leadership of Fidel, contributed in a very important way to the unity of the country to move forward.

The enemies try to separate the people and the government, the people and the Party, because they know that unity is our most valuable resource. Unity that does not include annexationists, sellouts or corrupt people, as that unity gets eroded by harmful practices that cannot be the Revolution. The bubbles of comfort are alienating in the digital networks, and also in the leadership processes. It is not by surrounding ourselves with those who only say what they think the boss wants to hear that we can promote the revolutionary transformation of reality. Those who promise and do not deliver; those who, far from personal example, we saw calling from their position for active participation in the networks and today—now without that responsibility—keep silent in defining moments, or worse, flirt with those who condemn us, do as much damage as numerous subversive plans together. The exclusion of honest and frontal criticism to accommodate the opportunist who, far from serving the people and the Revolution, only wants to perpetuate himself in a position, is a virus whose vaccine is the integrity of the honest people united.

We are living a symbolic war. Our boxer Julio César La Cruz, with his cry of dignity in Tokyo, has reminded us that we have not always estimated the symbolic in its real value, when the productions of epic character destined to our youngest compatriots have been increasingly scarce, and we know, thanks to Fidel, that the de-ideologizing economist and short-term approach to culture and sports is not what should prevail among us.

The failure to communicate effectively the new circumstances of the ideological struggle in times of internet, the bureaucratic treatment of legitimate claims such as not resigning ourselves to standing in lines as a method of distribution, the demobilization that does not see the people as the central protagonist of the confrontation with imperialism, the underestimation of the cost of not preparing ourselves culturally on a society-wide scale for the digital scenario, the devaluation of the fidelista methods for reconnection with vulnerable social sectors, the technocratic vision of the solutions, are not revolutionary practices and have to be swept away from our political lives.

In the name of unity, the First Secretary of our Party has called to defend peace for all, without asking for political affiliation, as is the system for delivering vaccines, schools and hospitals for more than 60 years in Cuba. We defend peace, even for those who went out to damage it, because the bombs, if they shatter us to pieces would please those who demand them be launched against us from their comfortable 90 miles away, do not have names and surnames nor will they ask if you are a revolutionary or not.

It is the Cuban people who have paid with thousands of lives for the right to decide their future in peace, for the justice that those of the Centennary Generation who went to the Moncada and have arrived until today guarding it. This is the height at which we have to be, with all Cubans who want Cuba free from the yoke of the Yankees, irrespective of whatever they do and whatever the imperialists say, whether they call themselves Joe Biden or Donald Trump.

Featured image: A Cuba solidarity poster declares “We will live and we will win.”