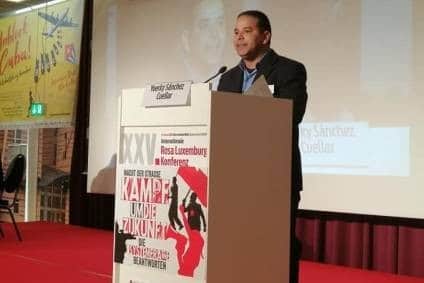 Young Cuban deputy Yoerky Sánchez, a member of the Council of State and director of Juventud Rebelde newspaper, spoke on Saturday at the Rosa Luxemburg Conference in Berlin

“Cuba shows that it is possible to build a socialist state of law and social justice, democratic, independent and sovereign, organized with all and for the good of all. Deputy Yoerky Sánchez Cuellar, on behalf of Cuba, explained that at the Rosa Luxemburg 2020 International Conference held on Saturday, January 11, in Berlin.

Invited by Junge Welt, a Marxist-oriented newspaper in German-speaking countries and a faithful ally of the Cuban struggle against the US blockade, Sanchez is also director of Juventud Rebelde laid out to those present the harsh economic pressures that the northern nation imposed on the Caribbean country in 2019. They reached a rate of one measure every seven days.

These measures, which included a strong communication factor, such as the campaign to discredit the Cuban medical collaborators, are a follow-up of the Blockade policy that the US government has maintained against the Caribbean country for 60 years. Sanchez explained: “The effect of this amounts to more than 138.8 billion dollars at current prices (…) It constitutes the main obstacle to the development of our nation,” said the Cuban deputy. “There is no sector of Cuban life that is unaware of the impact of this genocidal policy. However, he said, “in the midst of the vicissitudes and deficiencies, Cuba exhibits a successful social model.

Likewise, referring to the destabilizing actions of the United States in the entire Latin American region, the Cuban congress member presented the recent events in Bolivia and Brazil as proof of the reactionary right’s attack on the continent’s progressive processes. He stated that the US government sells the neo-liberal model as a panacea and “demonizes anyone who confronts its dictates”.

Referring to Cuba’s position on issues such as the sovereignty of nations and the right to opt for a socialist system, the young Cuban said, “We advocate the right of each nation to determine its own political, economic, social and cultural system, without external interference or pressure. In this way, we reject the pretensions of Western powers to impose a single model of democracy, because this is not the patrimony of any country or region,” while assuring that Cuba “does not export its democratic model or try to give formulas to anyone.” However, he emphasized, fidelity to our principles continues. “What we will never change is the will to continue building socialism.”

In this way, the voice and principles of Cuba were heard in an event in which intellectuals, politicians, scientists and artists from Europe, the United States, Latin America and the Middle East participate. Under the slogan Street Power – Struggle for the Future – Answering the Question of the System, is the largest conference of the left in Europe.

As in the 2019 edition, this 25th Rosa Luxemburg International was the scene of a demonstration of solidarity with the peoples of Latin America, including Cuba, Venezuela and in particular Bolivia.

Prior to his speech at the important event, the Cuban deputy held a meeting with representatives of leftist organizations in Germany. He thanked them on behalf of his country for the support provided in the fight against the bloody blockade of the island. Featured image: Cuban deputy Yoerky Sanchez, member of the Council of State and director of Juventud Rebelde, explained to those present the measures that the United States is unleashing against Cuba. Author: Cuban Embassy in Berlin Published: 11/01/2020 | 09:31 pm