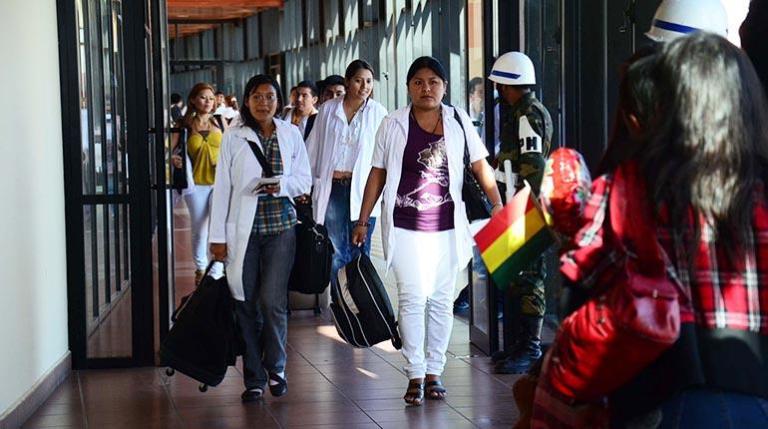 The Ministry of Health of the coup government of Bolivia has informed around 400 doctors working in Cochabamba and who studied in Cuba and Venezuela that they are going to be laid off for no given reason.

The president of the Association of Medical Graduates Abroad, Wilber Barral, said yesterday that the doctors are in a state of emergency because in the last few weeks they have received five complaints of unjustified dismissal already, instructed by the Minister of Health, Aníbal Cruz.

“These are professionals who have worked for more than five years in Bolivia. We have certifications validated by the Bolivian government under international agreements. We left our country to train in another one because the opportunity arose, but we returned to contribute,” he said.

Barral said the affected people filed an affidavit against Cruz demanding that the issue be argued in court. The removal of the doctors is an illegal act because they have all met the requirements to perform medical functions in the health centers of Cochabamba.

“The intention is to leave five other municipalities without doctors. We are willing to take exams and to validate our certifications in San Simón,” he concluded.

At the national level there are around 5,000 Bolivian doctors who graduated abroad and returned to work in health centers in remote areas and on the borders. The doctors assured that they are well trained to work in Bolivia.