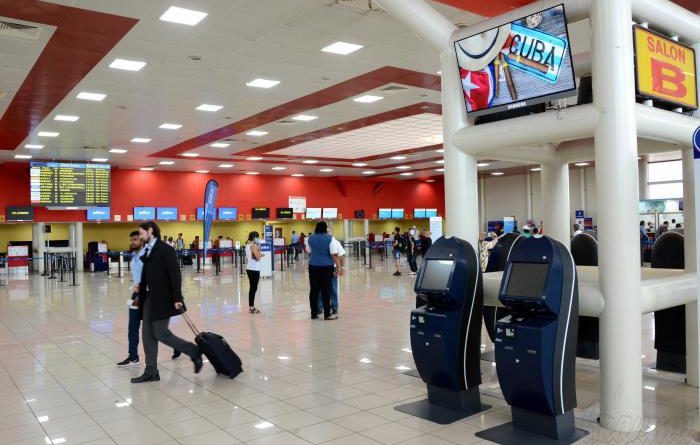 This effort is Cuba’s response to the absurd U.S. government decision to eliminate flights to other provinces from that country, in an attempt to not only damage the country’s economy, but also create discontent among visitors by overcrowding services offered in Havana.

Havana’s José Martí International Airport Terminal-3 has a new look, since conducting an investment process in 2019 to improve services provided at the country’s main airport. This effort also addresses the absurd U.S. government decision to eliminate flights to other provinces from that country, in an attempt to not only damage the country’s economy, but also create discontent among visitors by overcrowding services offered in Havana.

Among the repair work completed was improved lighting in passenger departure lounges, the immigration and customs area, and waiting rooms; while new luggage carts were acquired and both the panoramic glass elevators and those for wheelchairs were repaired, according to Iran Cueto Carmona, general coordinator of José Martí International Airport.

Other investments included new wall covering for the facade of the final waiting room, to upgrade its environment and control brightness inside the airport.

Cueto added that electrical outlets were installed in all areas of Terminal-3, allowing passengers to charge mobile phones and other devices; the roof waterproofing process was completed to eliminate leaks in certain areas of the Terminal, and similar repair work was completed at Terminal-2.

Baggage conveyor belts were also repaired, and work is being done on the installation of a fifth baggage conveyor, to reduce delays for arriving passengers at baggage claims.

Cueto also reported that significant growth in arrivals of passengers and aircraft was noted in 2019 (approximately15 percent), which contributed to congestion for passengers and delays in the provision of services.

Although some negative elements continue to affect the quality of services provided, work is being done to find solutions, including the repair of all sanitary services in the Terminal-3 and, in future plans, upgrading of VIP lounges.

Actions to be undertaken in 2020 include further repairs of airport infrastructure, floor maintenance and lighting on footbridges.

NEW SERVICES IN THE TERMINALS
The construction of seven new currency exchanges (CADECA) in Terminal-3’s area B has recently been completed, to facilitate this service for passengers, especially during peak periods of congestion, while a special currency exchange for commercial entities operating in the terminal has also been added, said Liset Urgellés Carreras, head of Terminal 3.

This task was required to comply with Resolution 276/2019 from the Central Bank of Cuba which stipulated that U.S. dollars and other foreign currencies are only accepted in CADECAS located in the boarding area, after passengers have been checked in the emigration and customs area.

By March 12, automated check-in kiosks will be in operation. This new technology allows passengers to complete the process themselves with the device, including choosing their own seat, thus helping eliminate congestion at check-in counters, Urgellés Carreras reported.

Such kiosks have been available in the Terminal for American Airlines customers only, but now all passengers flying on airlines that have contracts with Cuban Airport and Aeronautical Services S.A. (ECASA), will have access to this system, which will also be installed in other airports nationwide, as well as José Martí International Airport’s Terminal 2.

FOOD SERVICES
Despite the impact of the economic, commercial and financial U.S. blockade of Cuba and the implementation of new unilateral coercive sanctions, the Cuba Catering S.A. enterprise intends to continue developing its commercial strategy by introducing new gastronomic service concepts in airports with its own brands, in order to raise the quality of food services and enhance elements of national identity.

Along these lines, the final waiting room in Terminal 3 now has new higher quality spaces that are expected to meet customers’ expectations and increase satisfaction.

“As a pilot project launched just a month ago, various adjustments to the menu, the type of product and sales are still being made, so such concepts, once adjusted, will be implemented in all airports nationwide. This is the aspiration of the state enterprise Cuba Catering S.A., which continues striving to improve service quality,” Báez Fernández stated.

Also opened recently is a CheckMark corner store, the self-service format allows customers to select an item, pay directly at the cash register, and, if they prefer, consume it on site.

With this premise, Black Café is presenting a menu of 20 coffee-based beverages available to customers, served with Cuba Catering S.A. prepared sweets and imported items. Plus, a fast-food cafeteria was established, offering pizzas and hamburgers, as well as table service.

With all these new offerings, total capacity within the same area was increased to 112 seats, where 77 existed previously, Báez Fernández stated, stressing that the remodeling work was conducted in only a month and a half, without disrupting services the airport provides.

Likewise, he stressed that sales per passengers increased 7% and those of prepared products rose by 8%. Thus, despite a reduction in the number of passengers during this period, as compared to the previous year, gross sales increased.

Prevailing throughout the investment project was the national vision of promoting productive and commercial links with other economic actors, based on Cuban policies to increase hard currency revenue, in these times of economic and financial blockade, while increasing quality and contributing to everyone’s economy.