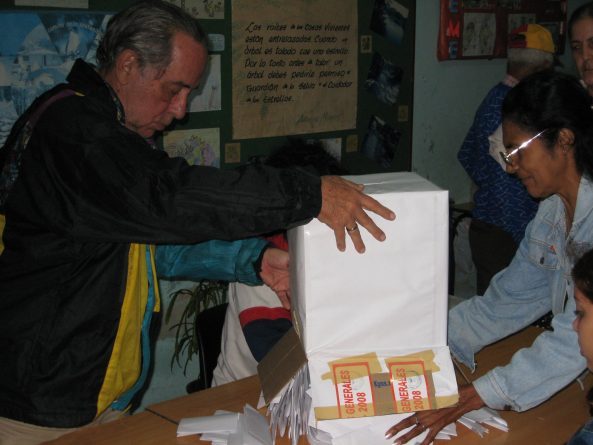 By Arnold August*
The final results were announced on March 1st, 2019. However, based on my visit to Cuba last September–October, during the course of the debate when people had the opportunity to revise the draft (which they DID – and moved it toward the “left”!), and during a recent visit to Havana at the end of January into early February, I am not at all surprised by the very positive results.

The campaign and the voting took place under very difficult conditions. A concerted campaign by the most diverse sectors in the U.S. and inside Cuba itself against a positive outcome constituted one of the most ferocious examples in recent history of the ideological, political and cultural war being waged against the Cuban socialist option.

For example, a former Cuban diplomat and academic resident in Havana was quoted in the corporate media just before the vote:

All this propaganda [for the Yes] has created the image of strong pressure on people to vote yes, and that if you vote no there’s something wrong with you… From what I can tell, if you add together the no votes, the ballot papers left blank or invalidated and the abstentions, we are somewhere between 20 and 30 percent of the total electoral roll… That would mean only around 60 percent voted “yes.” And the valid votes would be between 70 and 80 percent, and not at 97 percent as in the local 1976 [referendum]…. The country has changed.

First, one cannot compare the results of the 1976 referendum (about 97% voter turnout with about 97% in favor of the constitution) with those of the 2019 referendum. To do so serves, wittingly or not, to purposely place the bar too high in order to discredit the current process. The historical conditions of 1976 compared with 2019 are entirely different, and beyond the scope of this short piece.

In the same vein as the first source quoted above, an accredited foreign journalist in Havana who actively campaigned for the “no” side or at least for abstention was also betting on the preconceived notion that Cuba has “changed” and is moving away from socialism. (By the way, no one charged this journalist for interfering in Cuba’s electoral process!) He headlined: “Cubans expected to voice unprecedented opposition in constitutional vote” – and the content went like this: “Opposition to the new charter could reach a quarter of the vote, one Cuban analyst said, a major increase from the low single digits of past votes.”

For a third example, the CNN Havana correspondent dared to headline: “Does socialism have a future? Cubans are hitting the polls.” It goes on: “Millions of Cubans are about to tell the world ‘yes’ – or so Havana hopes.” Havana hopes? As if millions of Cubans had not already participated in the constitutional debate, when, in fact, they “changed” it to be closer to socialism and even to include the ideal of communism, which had been deleted in the draft.

This media orientation directed by the U.S.-centric view on Cuban society, which dictates that Cubans cannot really desire socialism, is part of the ideological and political war to give the impression that the “yes” vote is forced upon the Cubans by the government. To make it even more ominous, the CNN correspondent, after quoting the usual dissident sources, concludes on a very ominous note:

In one government-produced video on social media, former Cuban spy and one-time U.S. prisoner Gerardo Hernández raises the stakes. “I will vote ‘yes’ because there are two groups, the ‘yes’ and the ‘no,’” he says. “The ones calling us to vote ‘no’ are the traitorous enemies of Cuba.”

Oh, the Cubans are so scared! Big Brother is watching.

There were many other examples such as these.

What were the results and why were the soothsayers wrong?

These are the results according to the national tabulation of official vote-counting in the local electoral colleges (which I personally witnessed during elections in 1997–98 and again in 2007–8 whereby nothing is more transparent):

Voter turnout was much higher than in the latest general elections in 2018, which, as mentioned above, registered 82.9%. One must keep in mind that the media war against the elections was less ferocious in 2018, for the most recent national parliamentarian elections, than in the February 2019 referendum. This cultural war began well before the referendum period itself. Thus, despite the adverse conditions, the February 2019 voter turnout represents, for the first time since 1993, a reversal of the trend toward lower voter turnout.

One very important factor: the 1976 referendum did not have to deal with the U.S.-led media offensive through social media, which of course did not exist in 1976.

Thus, my very initial evaluation is that Cuba has indeed “changed” and is going through a process of change, even though it is not the type of change hoped for by some. When one considers the grassroots debates from mid-August to mid-November and the referendum campaign itself, one sees that Cuba has changed – and is changing – toward a more socialist model.

Is this part of the revival of what some thought was dead and buried, what they call “the pink tide”? The referendum vote came on the same weekend as the Bolivarian Revolution’s amazing victory against the U.S.-led coup d’état attempt (February 23) through “humanitarian aid.” Is this part of a new awakening in Latin America and the Caribbean that is represented by changes that strike fear in the hearts of the enemies of the Cuban and Bolivarian Revolutions? We will see in the coming weeks and months, as events are unfolding rapidly. I am optimistic.

*Arnold August is a Canadian journalist and lecturer, the author of Democracy in Cuba and the 1997–98 Elections, Cuba and Its Neighbors: Democracy in Motion and the recently released Cuba–U.S. Relations: Obama and Beyond. As a journalist, he collaborates with many websites in Latin America, Europe, North America and the Middle East. Twitter and Facebook. His website is www.arnoldaugust.com.