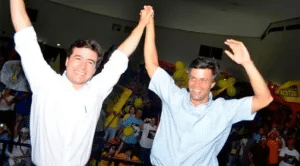 Extreme right-wing Venezuelan politician Daniel Ceballos definitively rejected the authority of the self-proclaimed “interim president” Juan Guaidó, and asserted that the former deputy does not represent anyone in Venezuela.

Ceballos also recognized President Nicolás Maduro as acting head of state, thus trying to distance himself from the violent groups with which he shared responsibility of organizing the violent acts during the guarimbas, both in 2014 and in 2017.

Ceballos, who was a former mayor of San Cristóbal municipality in Táchira state, said that opposition supporters “have been told that with Maduro in power nothing can be done. That thesis is wrong; the president is Nicolás Maduro.“

He added that Venezuela has evolved in recent times, as well as all Venezuelans and Venezuelan political sectors. For this reason, citizens have an interest in politics and wish to solve their problems, and to live and work.

RELATED CONTENT: A Candidate Without Primaries: Ecarri to Run in 2024 Presidential Elections of Venezuela

Ceballos against Leopoldo López
With all this, Ceballos made clear that the self-proclaimed Juan Guaidó “no longer represents anyone in the country.” Regarding Leopoldo López, Ceballos stated that he is far removed from the reality that Venezuela lives, and that the Voluntad Popular (VP) wing that López controls lacks internal democracy.

“Popular Will is not Leopoldo’s party,” said Ceballos. “Nor is it the party of Ceballos, Noriega or Guaidó. It is the party that responds to the will of Venezuelans who want to participate in democracy.”

He also admitted that in 2014 he himself accompanied López in the violent coup attempt that they named La Salida [The Exit] and even defended López when he was incarcerated and facing a judicial procedure. However, he denied that López, a fugitive from Venezuelan justice, formerly his ally, has recently launched a smear campaign against him.