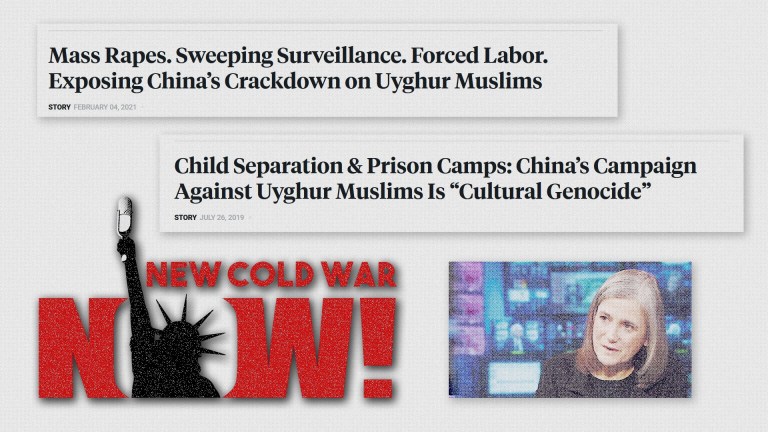 While Democracy Now hosts US gov’t-funded pundits to spread humanitarian interventionist propaganda about Xinjiang, an analysis by The Grayzone found most of the outlets’s China coverage is sharply negative

The U.S. has claimed a humanitarian “Responsibility to Protect” to justify military operations in the name of saving civilian lives from evil dictators. Most notable have been the brutal U.S.-led wars in Libya and Syria which destabilized entire regions in the name of “civilian protection” and “promoting democracy.” These operations relied heavily on self-described human rights NGO’s and media outlets to cultivate support among liberal sectors of the US intelligentsia. Sadly, Democracy Now has been among the most influential and insidious outlets carrying water for the humanitarian interventionist agenda.

The flagship program of the left-wing Pacifica radio network, Democracy Now (DN) and its founding host, Amy Goodman, are regarded as standard bearers of grassroots progressivism. However in recent years the show has become a reliable platform for uncritical regime change propaganda, demonizing targets of US empire from Syria to Nicaragua while sending a correspondent to embed with US-backed “rebels” in Libya. Now that China is in the crosshairs of the US, DN is playing host to virtually any piece of humanitarian agitprop that Washington can conjure up, while publishing a regular serving of sharply negative stories about Chinese government and society.

A review by The Grayzone of every China-related report and interview Democracy Now aired in the past year found that 3 out of every 4 painted China in a decidedly negative light, often echoing narratives emanating from the US State Department. Perhaps its most inflammatory and factually questionable report appeared this February amid an escalating wave of anti-China propaganda.

On February 4th, DN aired a story on the latest moral outrage out of China’s Xinjiang Uygur Autonomous Region. It was a report from the BBC, the British Foreign Office-funded media giant that was exposed by The Grayzone as a UK intelligence contractor. Instead of questioning the BBC’s report, which appeared custom-tailored to generate public support for the new Cold War, Democracy Now uncritically amplified it.

DN’s story opened with the BBC’s interview of Tursunay Ziawudun, the singular source for accusations of “mass rape” in so-called re-education camps in Xinjiang. Democracy Now repeated the US-based exile’s claims as fact without any investigation into the credibility of the source. Ziawudun is no stranger to the Western press. In fact, prior interviews with Ziawudun reveal several glaring inconsistencies that place her credibility as a source into question.

Ziawudun was first interviewed by a human rights organization in Kazakhstan called Atajurt. The group possesses no formal website or information about donors, only social media accounts. In 2018, directors of Atajurt junketed to Washington DC to meet with the National Endowment for Democracy and various anti-China influencers.

Neither Ziawudun’s interviews with this organization nor her testimony to the CIA-created Radio Free Asia mention rape at all. In a feature withBuzzfeed in February of 2020, Ziawudun stated, “I wasn’t beaten or abused… The hardest part was mental. It’s something I can’t explain – you suffer mentally. Being kept someplace and forced to stay there for no reason. You have no freedom. You suffer.”

Ziawudun’s reflection on her experience changed character after she became involved with the Uyghur Human Rights Project (UHRP). The UHRP was created and is funded by the National Endowment for Democracy (NED), a US intelligence passthrough that was established under the watch of former CIA director William Casey.

The Grayzone exposed the Uyghur Human Rights Project as part of a consortium of groups operating under the World Uyghur Congress (WUC) umbrella, and funded to the tune of tens of millions of dollars a year in US government money to promote the narrative of a Uyghur genocide carried out by China’s government.

In September 2020, the UHRP resettled Ziawudun in the United States, flying her from Kazakhstan to the Washington DC area. “Ms. Tursunay is a critical witness…,” the US government-funded organization declared in a press release. “Her testimony will be vitally important for future atrocity-crimes determination processes and tribunals.”

In a CNN report based on her contradictory claims alleging a Chinese policy of “systematic rape,” her Chinese passport briefly appeared on screen. It showed that after all her alleged travails, she was granted a ten year visa to travel abroad as she pleased. Yet CNN reported she “walked across the Kazakh border” in 2019, creating the impression she had to escape from China to tell her horror story. In a subsequent broadcast of its report, CNN blurred out Ziawadun’s passport issue date.

So Chinese gov subjected her to systemic gang rape, forced sterilization and then issued her a 10 year passport so she could travel abroad to tell CNN. Got it! pic.twitter.com/6NyCj19nse

Democracy Now did not mention Ziawudun’s apparent recruitment by the US government or her dramatically shifting story in its coverage. Instead, it invited a cast of guests from the Washington’s anti-China echo chamber on to discuss her story.

Among them was so-called “linguist,” Abdulweli Ayup, who spent two years in the United States as a fellow for the Ford Foundation and has interviewed more than a half-dozen times with Radio Free Asia, a US government propaganda network founded by the CIA. Ayup’s biography was published in a lengthy report by the Uyghur Human Rights Project, the same NED-backed organization which helped Tusurnay Ziawudun resettle in the United States.

U.S. academic Darren Byler rounded out Democracy Now’s panel on the BBC report. Byler is a fellow at the Wilson Center, a DC-based think tankfunded by the US Congress, the Embassy of the United Arab Emirates, and a host of Wall Street big banks including Bank of America and J.P. Morgan Chase. Former U.S. General and CIA director David Petraeus and BP share important council positions for the organization.

Byler is a regular source of quotes advancing the US government’s Cold War posture against China. He has framed Beijing’s counter-terrorism policy in Xinjiang as the political and military equivalent of the United States’ post 9/11 War on Terror,  omitting the historical context of dozens of documented mass casualty attacks by the separatist Al Qaeda affiliate known as the East Turkestan Islamic Front in the region between the years of 1990 and 2016. He was even quoted in an article by the State Department-funded Coda Story attacking The Grayzone alongside other US government sponsored anti-China pundits.

An email to Democracy Now staff requesting a comment on its relentless parade of anti-China coverage and steady stream of dubious, US government-sponsored guests went unanswered.

Democracy Now’s coverage of China over the past year has been almost entirely negative. A content analysis by The Grayzone of DN headlines directly referencing China from February 1st 2020 to the present reveals that 54 of 69 (78 percent) presented a sharply negative spin on events. The vast majority of the stories focused on “human rights” in Hong Kong and Xinjiang, echoing narratives generated by the US national security state. Some emanated directly from hardline Trump administration officials like Mike Pompeo and John Bolton.

The other fifteen DN stories could be considered “neutral” in tone. They centered on developments surrounding the COVID-19 pandemic. Even here, however, DN’s bias toward China stood out. For example, in a headline about a small outbreak of Covid in China in April 2020, DN editors placed scare quotes around the word “imported” in order to cast doubt on Beijing’s claim that the virus originated abroad. Meanwhile, the outlet has offered nothing but praise for the pro-US government of Taiwan’s successful pandemic response.

While Democracy Now appears to have deemed the US’s Cold War-style policies toward China as unworthy of criticism, the flagship progressive program found time to host so-called Xinjiang expert Adrian Zenz in 2019. Zenz, a far right Christian fundamentalist member of the Victims of Communism Memorial Foundation who claims to “led by God”against the Communist Party of China, is an odd guest for a supposedly left-wing program.

In analysis of Zenz’s research paper accusing China of forced sterilization and genocide in Xinjiang, The Grayzone’s Gareth Porter and Max Blumenthal found wanton manipulation of data, major errors and a number of missing footnotes. Despite his clear credibility issues, Zenz is without question the most cited source in the U.S. and West on all matters relating to Xinjiang.

Democracy Now provided Zenz a platform despite the fact his most constantly repeated claim that over one million Uygurs are being detained in “concentration camps” was based on a mere two sources: a total of eight interviews conducted by the NED-backed, Washington DC-based Network of Chinese Human Rights Defenders and a single television report from a Turkish-based Uygur exile organization.

Under the Trump national security doctrine, which has been largely retained by the Biden administration, the US proclaimed China and Russia to be the greatest threats it faces on the global stage. The truth is that China’s emphasis on poverty alleviation, multilateral cooperation, and economic growth coupled with its growing political independence is seen as an existential threat to the United States’ continued hegemony. As the US charts a dangerous course toward war with China, authentically independent investigative journalism and activism is required to prioritize peace over access to the powerful.

Unfortunately, while Democracy Now has marketed itself as “the exception to the rulers,” it is functioning as little more than a force multiplier for the State Department, amplifying Cold War narratives on China behind progressive cover.