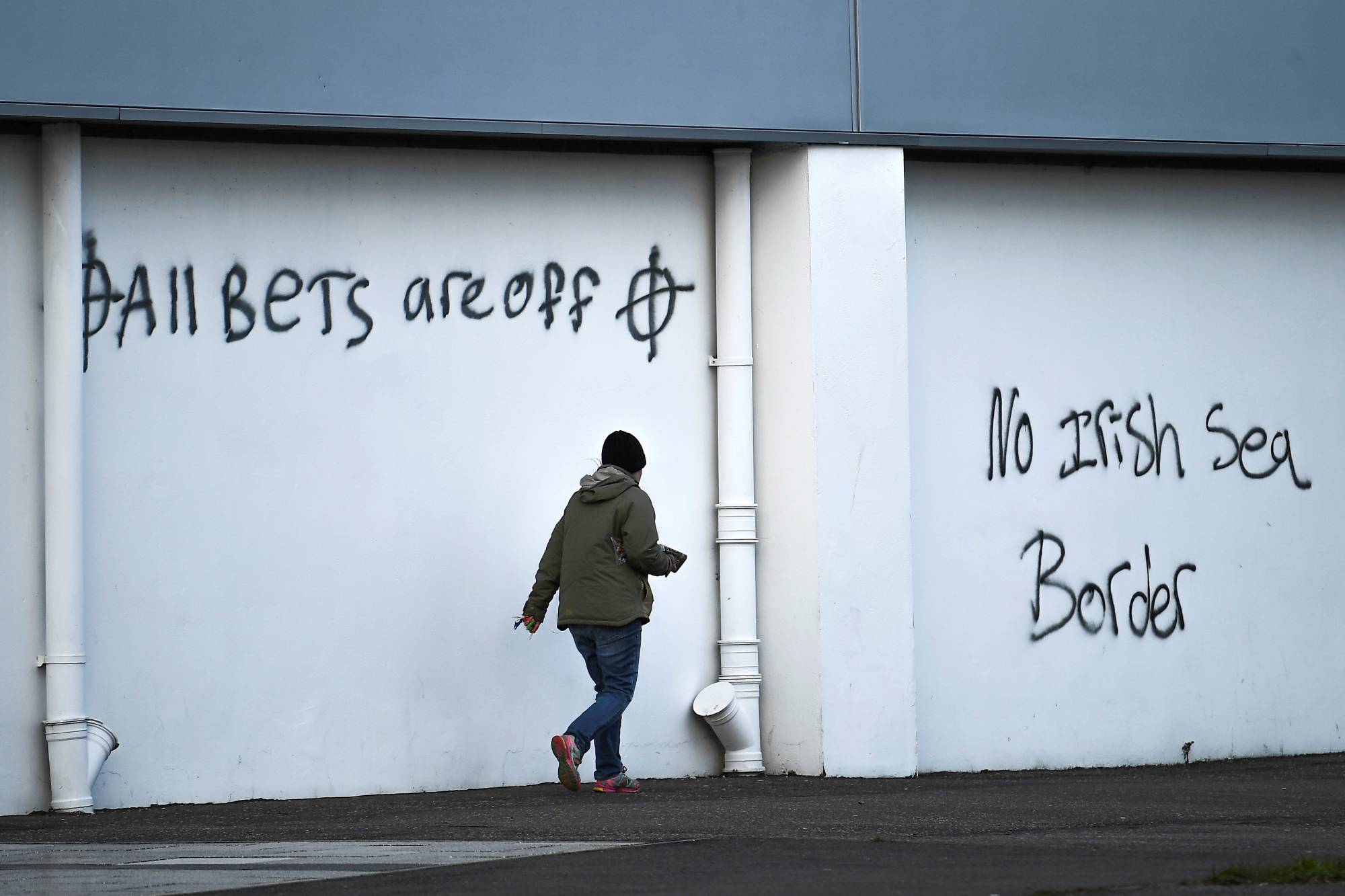 Loyalist graffitis are seen with messages against the Brexit border checks in relation to the Northern Ireland protocol at the harbour in Larne, Northern Ireland February 12, 2021. REUTERS/Clodagh Kilcoyne

Ulster will fight and Ulster will be right. This was the rallying war cry of political unionism and it’s armed supporters in loyalist paramilitaries during the partition of Ireland in the early 20th century.

There have been many similar invocations of this settler colonial mindset throughout Irish history, together with a veto on progress within Irish Society and around Irish reunification. Blood-curdling war cries of No Surrender, No Lundy Traitors, No sellouts, No Anglo-Irish Agreement 1985, No Good Friday Agreement 1998, and most recently No Border in the Irish Sea 2021.

The ever-present threat of Loyalist violence is promoted by the Unionist political establishment. It uses the threat of armed loyalism, combined with its continued Veto, granted by successive British government’s for generations, this duopoly of political and paramilitary power is used to prevent any progress on the Irish question which diminishes the role and power base of the Colonial settler occupation of the North of Ireland as it continues to remain a regional colony of the United Kingdom

The Good Friday Agreement was signed in 1998.  All armed British troops, who were viewed as colonial occupiers by Irish Republicans, were to be removed from the streets together with the dismantling of the physical border between the Republic of Ireland and Northern Ireland. The island of Ireland now has seamless travel for freight, for people and for vehicles. We have an electronic Border manned by CCTV and by covert spy cameras. There is no physical Customs or military border between the North of the island and the South of the island.

Things have changed forever with the vote by the people of the United Kingdom to leave the European Union, a British exit, ‘Brexit’, was completed in January  2021. This necessitated customs checks between Britain and the European Union which are having an effect upon the political processes within Northern Ireland and the island of Ireland.

The British government on behalf of the British people, including those who are subjects of British rule in the North of Ireland, concluded a deal with the European Union that Northern Ireland would remain within the European Customs Union.

This would alleviate the necessity of having customs checks and physical borders on the island of Ireland.

Any Customs border between the European Union and Great Britain would be at British Ports. The border would not be on the island of Ireland but in the Irish sea between Britain and Ireland.

Neither unionism politically nor loyalism militarily are concerned about the opportunities for business and the economy to grow exponentially in the North of Ireland.  In the midst of a worldwide pandemic, they see no advantages to the current situation and indeed they insist on renewing the physical border between Northern Ireland and Southern Ireland, with all the inherent potential to destabilize the Good Friday Agreement this would entail.

It is the Good Friday Agreement that brought peace to the island of Ireland. Unionism alongside its cohorts in loyalist paramilitaries are demanding that the agreement between the British Parliament and the European Parliament be scrapped. That the Irish border is moved from the Irish Sea onto Irish land, as part of their process to destabilize GFA.

Political unionism is threatening the potential return of political violence from loyalist paramilitaries, in order to support its own narrow agenda and its place within the political establishment. No progress without its permission and agreement. The veto exposed.

Loyalist paramilitaries are threatening Dublin and have, according to the Democratic Unionist Party, threatened customs staff at the Port of Belfast and the Port of Larne.

Sabre rattling by the representatives of unionism, murmurings of violence by the representatives of loyalism, threaten to take us back over 30 years to the dark days of violence that overshadowed Society here in the North of Ireland. There is no excuse today for a loyalist to use violence to obtain their political objectives of destroying the political agreement between the Sovereign Parliament of the United Kingdom and the European Union.

Boris Johnson, the British cabinet, and the European Commission will not surrender to threats of Unionist, loyalist threats. Any campaign of political or paramilitary violence must be addressed and all those who transgress the law must be fully punishable by the law.