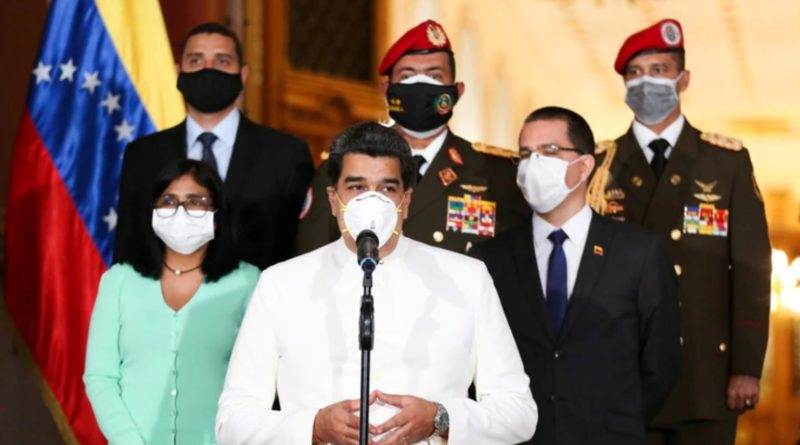 Venezuela is under siege. The USA and its allies unleashed unjust economic sanctions against the country that have resulted in Venezuela unable to sell its oil (its main source of revenue), and to buy food or medicine in the international market. It has stopped airlines traveling to Venezuela and the country is unable to make financial transactions in international banks. The loss to Venezuela’s economy is calculated at $130 billion and rising.

Like vulgar pirates of old, USA and European banks have stolen all Venezuelan assets (monies and gold) that had been deposited in their accounts. No other country in modern history has been subjected to this economic warfare outside of active military war.[1]

These restrictions are illegal because they are unilateral and not supported by the authority of the United Nations. They violate the UN charter, the OAS Charter and the Geneva Convention, among other international laws and regulations. The sanctions are a crime against humanity as the UN and human rights experts have said because they directly target and hurt a human population.[2] The sanctions killed directly 43,000 Venezuelans in 2017-18 and it continues.[3]

And in the midst of a pandemic, these sanctions apart from being illegal, are monstrously immoral and inhumane.

The following are the facts of the Venezuelan strategy for controlling the Covid-19 pandemic in their territory.

Solidarity of Cuba, China, Russia, WHO, UN, Pan American Health Organization, and the Red Cross: This international solidarity has helped Venezuela obtain, medicines, medical supplies, and food, even before the pandemic, without which there would have been massive loss of life. After the pandemic, China and Russia have flown in tons of medical supplies (masks, tests, aprons, etc.).

It is three time more costly for Venezuela to buy tests and treatments. The financial and transportation barriers are great and the petroleum prices are at an all time low for the small amount it can sell, (less than $20 a barrel).

On Thursday, March 12, 2020 President Maduro issued a state of emergency of the health system despite not having yet a single coronavirus case in the country; but he alerted the public that it is only a matter of time when the pandemic will hit Venezuela. He suspended all air flights especially to Colombia and Europe. Borders with Colombia and Brazil were strictly restricted and monitored. Venezuela followed the advice and protocols of the WHO.

On Friday, March 13 the first two cases were detected on people on a flight from Spain. They went into home quarantine and their contacts were followed up by doctors, along with all the passengers on that plane.

The Cuban anti-viral Interferon AlfaB is used to treat the infected.

School classes were suspended as of Monday 16th.

Chinese experts started to give their help.

Social quarantine is declared: self isolation for seniors is strongly advised, large gatherings are forbidden, public spaces (parks, stadiums, etc.) were closed. The churches were asked to suspend services. Wearing of masks was enforced in all public spaces.

The private sector clinics and hospitals started working in cooperation with the 46 public hospitals to fight together the virus.

The Venezuelan government tried to coordinate with Colombia to accommodate the thousands of people that cross the Colombian/Venezuelan border. Venezuela offered Colombia testing PCR machines so they can work on that side of the border, but Colombia refused.

A voluntary health digital questionnaire was issued which 11 million Venezuelans answered in a few days. It allowed a triage to be conducted with 18,000 people reporting cold/flu symptoms. Then 20,000 Cuban and Venezuelan physicians went house to house to visit these people who self identified as feeling ill. One thousand were diagnosed with the common cold/flu, 135 were deemed “possible” and they and their contacts were examined and went into isolation.[4]

The Venezuelan Coronavirus Protocol is based on a plan elaborated by a Presidential Health Advisory Committee composed of medical doctors and scientists. The use of statistics and modelling has dictated policy. The science and experience of the Chinese doctors in Wuhan has been greatly helpful and appreciated.

The strategy consists of:

+ Following-up of each case and their contacts

+ Quarantine of all arriving travelers

+ Self isolation and social distancing enforced by police

+ Border control with medical testing on the border with Colombia especially

Surveys show that a clear majority of Venezuelan (60+%) approve of how the government of President Maduro is handling the pandemic and agree with the measures taken. Opposition parties (except the violent extreme party backed by Trump) are cooperating with the government.

RELATED CONTENT: The US Believes it has a “Messianic Mission” Against Communism: Venezuelan Vice-Minister Carlos Ron

Food: The subsidized food packages that regularly feed over 6 million households are now delivered to vulnerable sectors by a host of social movements: 45,000 communal councils, 5,000 plus communes, multiple grass roots collectives, PSUV party units, armed forces, police, so that people do not have to leave home. Large outdoor markets are regulated, with strict sanitary measures.

On March 16 Cuban medical specialists arrived in Venezuela. They have the experience of having helped in Wuhan. Among them was the Cuban Health Minister and the Cuban doctor that invented Interferon Alfa B, Dr. Luis Herrera.

Work: all non-essential work is suspended except in the crucial industries of agriculture production and distribution of food, health and transport workers, pharmacies, electricity and communication.

On March 18 the IMF denied Venezuela a $5 billion loan it asked for exclusively to buy medicines and medical equipment. Venezuela is entitled to this loan, yet in the midst of a pandemic the IMF inhumanely denied this aid on the ridiculous pretext that it was unclear who was governing Venezuela.

Medicines and Beds: Venezuela has sufficient chloroquine and anti-viral medicines for 115,000 cases and 250,000 hydrochoroquine tablets useful for children. In the public sector there are 11,000 hospital beds, 450 intensive care beds, 573 beds in the Neighbourhood Clinics (Barrio Adentro) and 4,000 beds in the Comprehensive Diagnostic Centres. The private sector has 4,760 beds plus over 1,200 intensive care beds.

For isolation of the mildly sick, there are 4,000 hotel beds designated to isolate anyone who has the virus but only minor symptoms.

Testing[5]: Venezuela has done 3 times more testing than Colombia: a massive 12,211 tests per 1 million inhabitants, a higher testing rate than rich countries Sweden and Finland. (Venezuela’s population is 28.8 million). It has done over 350,000 tests and is the Latin American country that has done most intensive testing of its population.

Deaths: As of April 21,2020 there are 288 cases (the overwhelming majority are people who have travelled) and there have been only 10 deaths.

Unlike the USA, the global epicentre of the pandemic, where there is the chaos of unequal medical service, woefully inadequate hospitals and medical equipment, authorities competing with each other, a venal president contradicting medical experts and concerned more with Wall Street and electioneering than saving lives, in Venezuela, thousands of people are returning to their country (the mainstream press does NOT report this). The people know that a progressive Venezuelan government, under the expert leadership of President Maduro, puts people before profits, and is doing everything it possibly can, despite the economic siege, to save the lives of Venezuelans in this pandemic … And succeeding.