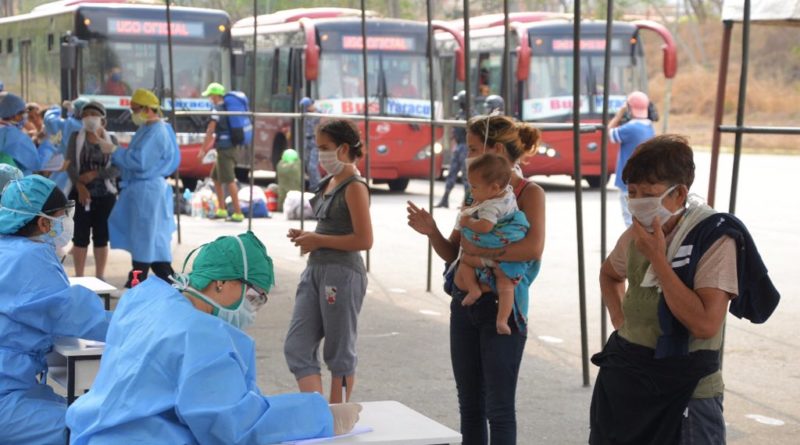 A total of 20,920 Venezuelans have entered the country through the border from these states: Táchira, Apure and Zulia, amid the coronavirus pandemic (Covid-19), said the president of Venezuela, Nicolás Maduro, on Friday. Of the total number, 11,956 people entered through San Antonio del Táchira; 3,600 by Apure state, 4,132 compatriots by Zulia state and 1,232 by the Brazilian border in Santa Elena de Uairén.

In a telephone interview broadcasted by Venezolana de Televisión, the President explained that 8,971 are already in their state of residence, while approximately 3,622 compatriots are complying with quarantine in different isolation centers.

Maduro noted that “today more than 530 compatriots entered. Every day they enter through the border of Cúcuta, Ureña and San Antonio of the Táchira state. We are prepared to receive them. Approximately 500 to 600 compatriots are entering per day.”

Regarding the preventive measures taken to avoid the spread of the coronavirus, the Venezuelan president indicated that on several occasions screening tests have had to be carried out three times, to detect whether the person who entered the country is infected or not.

RELATED CONTENT: The US Believes it has a “Messianic Mission” Against Communism: Venezuelan Vice-Minister Carlos Ron

In this regard, he related the positive case of a Yaracuy woman who entered through the Táchira state, which gave a negative result in the San Antonio care post. “She was tested on entering, another test on leaving, she was taken to Yaracuy by bus, we took her to her house and there she was received by the controls that the government has. They did a PCR on her condition and she tested positive there. The third PCR test was positive,” he emphasized.

Finally he recalled that “not a single Colombian has requested to return from Venezuela to his native Colombia, we have a homeland that receives them, with difficulties but we all help each other.”

Featured image: People received in the “Sobre Ancho” sector of the Yaracuy state on April 18, from the Táchira state, after crossing the border from Colombia. Photo: @GNBOficial