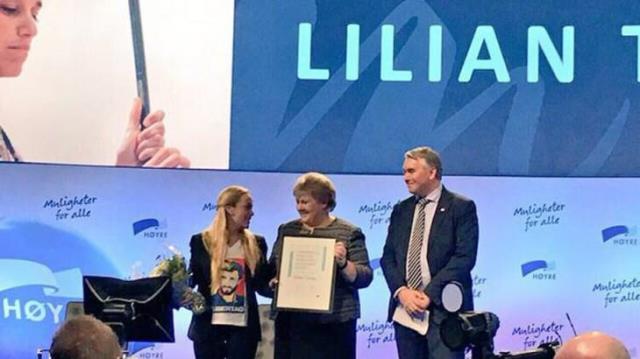 Norwegian Prime Minister Erna Solberg’s speech at the 76th General Assembly of the United Nations (UN), on Friday, September 24, could have been an attempt to sabotage the ongoing dialogue between the Venezuelan government and the most extreme sectors of the opposition grouped into the so-called Unitary Platform.

The Venezuelan news website La Tabla explained this on its Twitter account. Its analysis indicated that Solberg’s actions could be a result of her recent defeat in the electoral elections of her country, where she lost against the center-left Labor candidate, Jonas Gahr Støre.

At the 76th session of the UN General Assembly, Solberg spoke of alleged “serious human rights violations in many parts of the world, for example, in Venezuela.” Her statement led to an impasse between Venezuela and Norway as it affected compliance with the guidelines already signed in the memorandum of understanding between the government of Venezuela and the Unitary Platform of the extreme right opposition.

Furthermore, La Tabla underlined Solberg’s silence on Venezuela since 2016 “to preserve the country’s image as a promoter of peace and a ‘neutral’ facilitator. However, in April 2016, she expressed support for the actions of Leopoldo López when she presented an award to his wife, Lilian Tintori.”

In 2016, Solberg awarded the Lindebrækk Prize to Lilian Tintori on behalf of her party, the Conservative Party of Norway (Høyre), but not on behalf of the Norwegian government. Orinoco Tribune researched the prize and found that strangely this was the only time this “award” was granted, at least in the last 10 years. It seems that the award was just a media photo op to promote the anti-Chavista crusade launched by the Venezuelan extreme right.

RELATED CONTENT: Venezuelan Government Delegation Arrives in Mexico for Third Round of Dialogue

After an eight-year term, Solberg was defeated in an election held on September 13, in which her party obtained 20.4% of the vote against the 26.3% for Jonas Gahr Støre’s Labor Party.

La Tabla indicated that “her [Solberg’s] successor will be the leader of the Labor Party (social democrat), Jonas Gahr Støre, who will be able to form government in alliance with the Centrist Party and the Socialist Left Party, which would add up to 89 [parliamentary seats], four more than is required for the majority.”

An expert in international affairs told Orinoco Tribune that “Norway, a Scandinavian country, along with European countries formerly under the influence of Soviet Union, have been penetrated by United States intelligence services, and they usually act in response to Washington’s interests. Hence, it is not a surprise to see many governments of these countries playing the same script designed by the US on many issues, and Venezuela is one of them.”