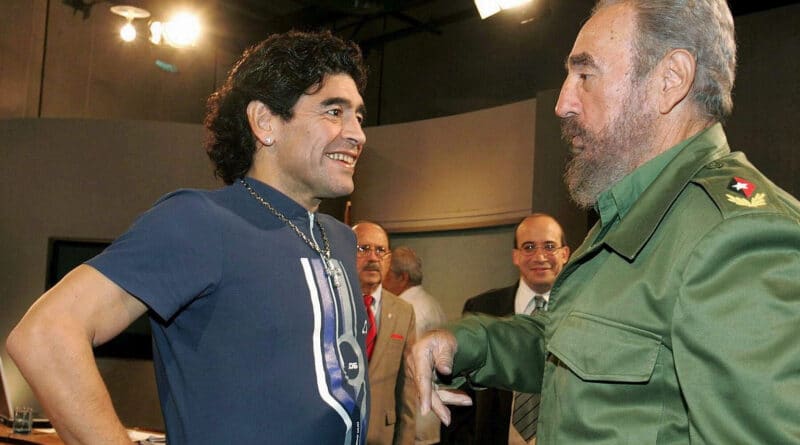 Argentine soccer star Diego Armando Maradona passed away today, November 25, according to Argentine and international media. The Argentine newspaper Clarín reported that “El Pelusa” “suffered a cardiorespiratory arrest in his house at Tigre (Argentina) where he had settled after his brain surgery.”

According to the Argentine media La Nación Maradona, who was sixty years old and weakened, suffered a cardiac arrest and could not be revived by doctors, who arrived in nine ambulances to assist him.

Recently, “El Diez” (“Number 10”) had undergone brain surgery for a subdural hematoma, but he had been discharged after successfully recovering from the intervention, according to doctors and family members. Prior to his passing, photographs of a diminished Maradona had concerned his inner circle and many worldwide.

Thus, Maradona spent his last days with medical care in a rented house in the Tigre district, in the province of Buenos Aires, Argentina, where he had been staying since November 11. His loved ones and specialists had determined that he should remain there until they could determine what the treatment best achieve his definitive rehabilitation, and overcome his substance dependency.

Meanwhile, the Justice of San Isidro partido (region) has already initiated a legal case to examine the case, and determine his cause of death as accurately as possible. The prosecutor in charge is Laura Capra, from the Benavídez Functional Instruction Unit (UFI), who attended to the scene with two secretaries.

Sadness
Brazilian soccer star Pelé (Edson Arantes do Nascimento) wrote on Twitter: “What sad news. I lost a great friend and the world lost a legend. Much remains to be said, but for now, may God bless his family members. One day, I hope we can play ball together in heaven.”

The president of Argentina, Alberto Fernández, wrote on social networks: “You were the greatest of all. Thanks for having existed, Diego. We will miss you for all of our life.”

Evo Morales, former president of Bolivia, wrote: “With a pain in my soul I have learned of the death of my soul brother, Diego Armando Maradona. A person who felt and fought for the humble, the best soccer player in the world.”

The President of Venezuela, Nicolás Maduro, wrote: “Much sadness, the legend of soccer has left us, a brother and unconditional friend of Venezuela. Dear and irreverent Pelusa, you will always be in my heart and in my thoughts. I have no words at the moment to express what I feel. Goodbye, Pibe de America!”

Much sadness, has left us the legend of soccer, a brother and unconditional friend of Venezuela. Dear and irreverent "Pelusa", you will always be in my heart and thoughts. I have no words at this moment to express what I feel. So long Pibe de America! pic.twitter.com/CgXpSjGw5J

“He died, whom I loved very much. Maradona says goodbye to us. My fingers are useless to write anything,” said Patricia Villegas, president of the Telesur news channel, through Twitter. “Friends forever, what a life,” wrote Venezuelan political leader Diosdado Cabello.

Likewise, various Argentine official agencies placed black ribbons on their social media profiles as a sign of mourning: “We regret the death of Diego Armando Maradona, a worker with the ball, a popular icon, who filled an entire country with pride and joy,” expressed the Ministry of Labor.

For his part, the Venezuelan Minister of Culture, Ernesto Villegas, recalled his last visit to Venezuela: “Sad news, the premature departure of Diego A. Maradona, exceptional athlete and close friend of Venezuela. In January he was at La Casona Cultural Aquiles Nazoa, invited by President Nicolás Maduro. A star in silver and tin, as Galeano would say, that will shine forever.”

The ultimate idol
El Pelusa was born on October 30, 1960 in a humble neighborhood in the Province of Buenos Aires. He grew up in a poor area of ​​the Lomas de Zamora game, known as Villa Fiorito, where he discovered his love for soccer in a pasture called Las Siete Canchitas.

He reached the Argentine First Division at the Argentinos Juniors club, when he was only sixteen years old. Quickly, after the 1978 World Cup won by the albiceleste, the Argentinian national team, Diego began to be taken into account for his play with the national team. On June 2, 1979 he scored his first goal against Scotland, his contribution to a final 3-1 victory.

Undoubtedly, the greatest joy in Maradona’s career was representing his country: he won the 1986 World Cup in Mexico, and scored the best goal in the history of the World Cup against England, a few years after the Malvinas War.

Featured image:  Maradona and Fidel now have November 25 in common, as the same date they left for eternity.