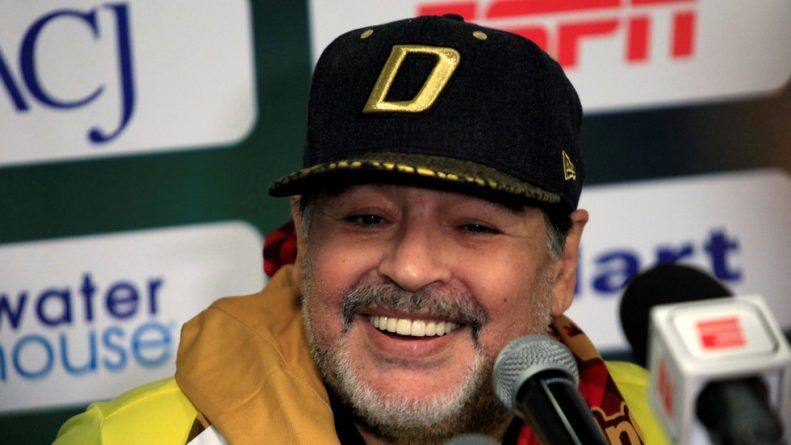 Argentinian great Diego Maradona has been slapped with a fine by Mexican football’s governing body, which found him in violation of its ethics code, after he backed Venezuela’s leader Nicolas Maduro and scolded Washington.
Maradona, who has been coaching Mexico’s second division team Dorados de Sinaloa, held back neither his praise for the Venezuelan president nor his scorn for the US government, after his side emerged victorious from a close encounter with Tampico Madero late last month.

Flushed with success from Los Doritos’ 3-2 triumph, the flamboyant Argentinian went on a political rant at the post-match press conference. He dedicated the victory to “Nicolas Maduro and all Venezuelans, who are suffering.”

Next, Maradona took a swipe at Washington.

“The sheriffs of the world, who are those Yankees? Just because they have the biggest bombs in the world, they think they are so much more advanced than us. No, they are not,” the 1986 World Cup winner declared, prompting an investigation by football authorities.

On Monday, the Mexican football federation said that Maradona would be subject to a fine for breaching articles 7 and 11 of the code of ethics, which demands that he as a team manager abide by the rules of political neutrality. The body, in its statement, did not specify the sum Maradona will have to fork out for his offense.

Maradona’s foray into international politics is not his first and should not come as a surprise, considering his long history of supporting left-wing Latin American leaders, which has drawn outrage from his more mainstream-minded colleagues and fans alike.

Back in 2017, the Argentinian, who deems himself a “chavista,” said that, as soon as Maduro gives the orders, he would be “dressed as a soldier for a free Venezuela.”

Maradona has been a long-time staunch backer of the embattled Venezuelan leader, making his support vocal amid the political and economic turmoil that has engulfed the country, and has even kicked a ball together with Maduro, back in November 2017.