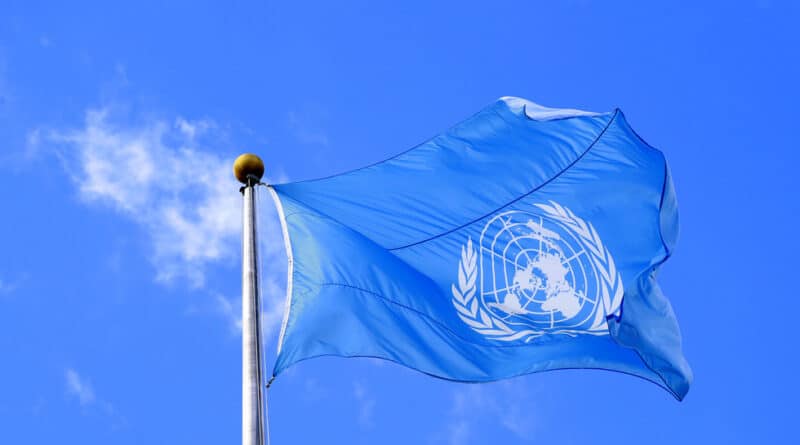 A ‘Group of Friends’ including Russia, China and a host of others have united to call out America’s decades-long disregard for the core founding principle of the United Nations: maintaining international peace and security.

The United Nations was created after WWII with one chief aim – to prevent the scourge of war. Thus, Article 1, Section 1 of the governing document of the United Nations – the UN Charter – states that, prime amongst the purposes of the United Nations is “[t]o maintain international peace and security, and to that end: to take effective collective measures for the prevention and removal of threats to the peace, and for the suppression of acts of aggression or other breaches of the peace, and to bring about by peaceful means, and in conformity with the principles of justice and international law, adjustment or settlement of international disputes or situations which might lead to a breach of the peace.”

Article 2 of the Charter goes on to explicitly ban“the threat or use of force” as well as intervention in the domestic affairs of other nations. Such prohibitions were informed by the horrors of WWII, including the Holocaust, which emanated from Nazi Germany’s aggressive war in Europe. In short, the nations of the world wanted to prevent such an evil from ever happening again. As UN Secretary General Kofi Annan would later state, “[n]o principle of the Charter is more important than the principle of the non-use of force as embodied in Article 2 [of the UN Charter] . . . .”

While the United States was a founding member of the United Nations, a party to the UN Charter and indeed a leader in helping to draft the Charter, the US wasted little time in whittling away at its prohibition of unilateral military action. The US did so through the full-scale invasion of countries such as Vietnam (1961-1975) and the Dominican Republic (1965), and through covert actions to topple foreign governments. The covert US regime change in Guatemala in 1954, for example, was characterized by UN Secretary General Dag Hammarskjöld as “the most serious blow so far aimed at the [United Nations].”

Similarly, US covert operations in the 1980s aimed at overthrowing the Sandinista government in Nicaragua became the subject of the landmark International Court of Justice (ICJ) case in which the ICJ ultimately ruled against the US, concluding that it violated international law norms forbidding the unilateral use of force. Not surprisingly, the US refused to abide by the ICJ’s ruling that it halt its covert activities against Nicaragua and compensate Nicaragua for the damages caused by those activities.

And the blows against the UN and the Charter kept coming, particularly as the Soviet Union weakened in the late 1980s and finally collapsed in 1991. Thus, in 1989, the US invaded Panama, levelling working-class neighborhoods in Panama City, and killing hundreds if not thousands of civilians. The US then invaded Iraq in 1990 and Somalia in 1992.

Then, in 1999, the Clinton Administration, showing the world that the US could and would act unilaterally without Security Council authorization, even in the heart of Europe, led the 79-day NATO bombing of Serbia. This intervention, along with the unilateral invasion of Iraq in 2002, were the death knell for the UN Charter’s anti-aggression provisions, with a growing consensus amongst international law scholars that these provisions had become a dead letter. The NATO invasion of Libya in 2011, which far exceeded the Security Council’s authorization of a no-fly zone to protect civilians and which instead quickly became a regime-change operation, only confirmed this conclusion.

Now, a bloc of nations calling themselves “Group of Friends in Defense of the Charter of the United Nations” (hereinafter, “the Group”) has united to try to revitalize the anti-war essence of the UN Charter. This group, representing a huge portion of the world’s population, includes Russia, China, Iran, North Korea, Algeria, Angola, Belarus, Bolivia, Cambodia, Cuba, Eritrea, Laos, Nicaragua, Saint Vincent and the Grenadines, Syria, Venezuela and the Palestinians.

In pertinent part, the Group announced this month that the UN Charter “has a renewed and even more important value and relevance, particularly in the midst of the COVID-19 pandemic, while providing a platform for, among others, promoting the prevalence of legality over the use of force and for both discussing and coordinating possible joint initiatives for fostering the respect to the purposes and principles enshrined in the UN Charter.” The Group specifically emphasized the importance of respecting the requirements of “non-interference in the internal affairs of States, peaceful settlement of disputes, and . . . refrain[ing] from the use or threat of use of force against the territorial integrity or political independence of any State, as enshrined in the UN Charter.”

Significantly, the Group’s announcement was made shortly after President Biden ordered the bombing of Iranian targets in Syria – an action which, lacking Security Council authorization and taking place in the absence of any armed attack against the US, clearly violated international law and threatens further conflict in the Middle East. This action also sent a message to the world that President Biden continues to operate under the assumption that the US has a unique right to use force anywhere in the world and at any time of its choosing.

The Group’s announced intention to bring new life to the UN Charter’s core provisions therefore could not come at a more crucial time. The US’s post-Cold War pretense to lead a unipolar world as the sole superpower must come to an end. The US’s unilateral military actions throughout the world (from Afghanistan to Iraq to Libya) have only left chaos and misery in their wake, and the US has proven that it is both unable and unwilling to mend the nations it has torn asunder. Only the concerted action of the rest of the world to restore the rule of law instead of the law of the jungle for which the US has long advocated can bring some semblance of stability to the globe. The Group’s recently-announced initiative is a good start to this process.