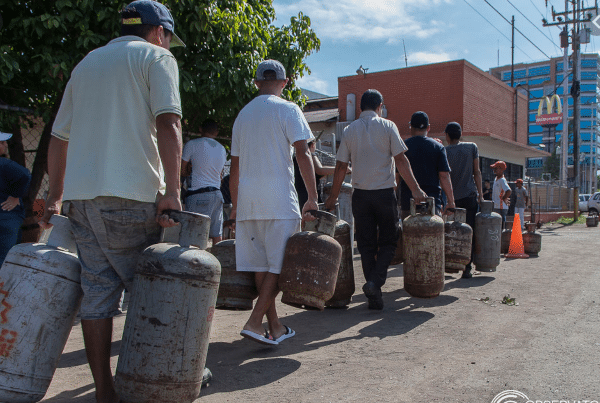 Gas distribution is a conflict that has worsened throughout the national territory and Caracas has not been the exception. However, there are communities that have taken alternative actions to solve the problem, such is the case of the Socialist Commune “Altos de Lídice” located in the populous La Pastora parish.

There, with organization, solidarity, empathy and volunteer work, they devised a plan for the distribution of gas in the different sectors of the community. The program consisted of networking with the Mayor’s Office of Caracas, a direct connection with the PDVSA Gas company, as well as the creation and installation of working groups, gas and other services, to define the processes, and thus fulfill with the methodology of action in the dispatch of domestic gas in all sectors.

This commune is made up of seven communal councils and each of them has a representative or spokesperson in charge of controlling the distribution of the service.

“They are in charge of registering the gas system, they know the number of [gas] cylinders in the territory and they keep track of the empty cylinders. This census allows the automaticization of processes,” as stated by Gisus García, resident and spokesperson of the Altos de Lídice.

Self-management and organized work are the effective way to find alternative solutions for the benefit of all. “In the community, working together we managed to have a close relationship with the company, we managed to become independent from those trucks, which despite being from the company charged an excessive amount for the service, we got to the point of working by ourselves with a big truck to transport at least a thousand cylinders.”

Taking charge of the problem represented a formidable solution for the community. “In less than three months we were able to distribute a little more than three thousand gas cylinders, complying with a waiting schedule of about 20 days. This process was received with great satisfaction by the families in the commune, because it represented an effective response to solving the problem. Working in a community unit has been the best experience.”

Gisus García agrees that community power provides hope for improvements in terms of quality service in the distribution of gas within communities, especially in Altos de Lídice. “From a communal perspective, it was a mandate from Commander Chávez who at the time transferred the distribution to the communes and socially-owned companies, however, so far it has become feasible in some territories. Our commune is only two years old, which generates a latent deficit on the issue of gas, but today and with full Covid-19 quarantine we are working to improve that,” says García.

Likewise, the communal spokesperson says that they have had problems with gas, for him it is a struggle to consolidate a price to acquire the full cylinder, understanding that there are not enough trucks, the spare parts (to fix them) are mostly imported and very expensive, it has not been easy due to the blockade issue, they are forced to look for private trucks, which puts a high price on the conventional.

“We have defined a cycle together with the Gas General Staff, which for some reason is not fulfilled. For three months an important dynamic has been used to be able to distribute the cylinders; after realizing that there is no gas in the plant, this cycle was not fulfilled. The refineries themselves are not sending enough gas to supply the sector,” explains García.

Another problem that at this moment is being seen by community leaders is the “bachaqueo” (black market) of gas. For García, “it is unfortunate that for reasons already explained, families are forced to buy the cylinder with a surcharge of approximately 3,000%. If they don’t have time, they can pay someone to buy it, which will double or triple the cost, but it is that or the option of buying firewood to cook on the stove. It must be recognized that there are no social comptrollers, the gas trucks prefer to sell the cylinders to the residential houses or office than to supply the barrios directly as before.”