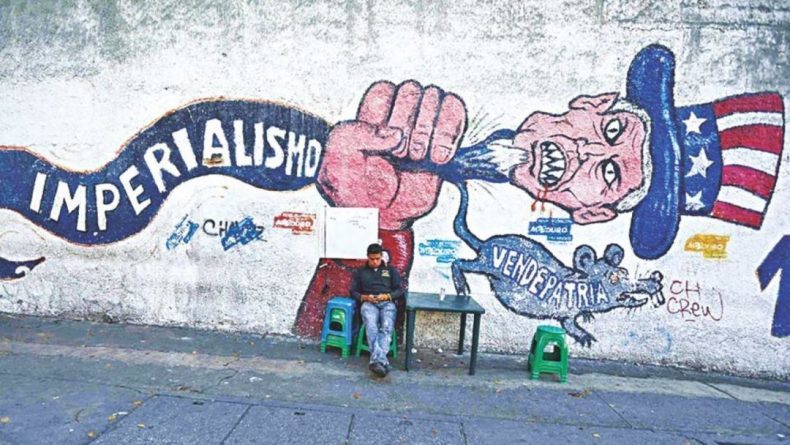 In March alone, the U.S. State Department listed eight additional sanctions against Venezuela, further adding to the denial of that country’s use of assets or its ability to receive international loans. Before the latest measure added on March 19, U.S. sanctions already cost Venezuela $30 million per day.

Should sanctions be considered an act of war? Since 1990, according to United Nations and nongovernmental organization (NGO) data and well-researched scientific studies, it’s estimated that at least 4 million people have died from the U.S. “war on terror” in Iraq, Afghanistan and Pakistan alone. The majority of those deaths didn’t come from direct killings, but rather from denial of necessities like clean water, medicine and food.

That denial is caused by U.S. and Western European use of international sanctions — utilizing their control over the United Nations.

U.S.-led U.N. sanctions share some telling similarities. For one, they are racist and genocidal in nature — disproportionately targeting non-European countries and those least able to endure the denial of basic needs, especially African countries.

The Consolidated List of individuals and entities subject to sanctions by the U.N. Security Council exposes the fact that, although peoples on the continent of Africa make up 17 percent of the world population, they represent 64 percent of the countries affected by U.N. sanctions.

Meanwhile, in Venezuela, 57 percent of the population are of Indigenous or African ancestry.

Imperialist sanctions are also justified in similar ways. They are supposedly made to rid people of government leaders engaging in corruption, violence and denial of democractic rights. Of course, their sovereignty must go as well.

The bottom line is that sanctions are an integral part of the declared and undeclared wars of U.S. imperialism, passed on from one administration to the next — whether Democratic or Republican. Their purpose is to bring about poverty, illness, starvation and desperation, targeting the people to weaken resistance to economic and military occupation.

In 2015, Physicians for Social Responsibility published probably the most thorough and scientific report to date on the effects of U.S. war, “Body Count: Casualty Figures after 10 Years of the ‘War on Terror’ — Iraq, Afghanistan, Pakistan.”

It states: “This investigation comes to the conclusion that the war has, directly or indirectly, killed around 1 million people in Iraq, 220,000 in Afghanistan and 80,000 in Pakistan, i.e., a total of around 1.3 million. Not included in this figure are further war zones such as Yemen. The figure is approximately 10 times greater than that which the public, experts and decision makers are aware of and propagated by the media and major NGOs.

“And this is only a conservative estimate. The total number of deaths in the three countries named above could also be in excess of 2 million, whereas a figure below 1 million is extremely unlikely.”

Other investigations, primarily using U.N. data, complete the analysis from the start of the U.S. war on Iraq in 1991 (the “Persian Gulf War”) and expose the deadly and purposeful effect of sanctions.

Graham Vanbergen, in a September 2015 article published by Global Research and TruePublica, writes: “Undisputed U.N. figures show that 1.7 million Iraqi civilians died due to the West’s brutal sanctions regime, half of whom were children. …

“The mass death was seemingly intended. Among items banned by the U.N. sanctions were chemicals and equipment essential for Iraq’s national water treatment system. A secret U.S. Defense Intelligence Agency (DIA) document discovered by professor Thomas Nagy of the School of Business at George Washington University amounted, he said, to ‘an early blueprint for genocide against the people of Iraq.’”

Citing additional reports from the National Academy of Sciences and data from the U.N. Population Division, Vanbergen concludes: “According to the figures explored here, total deaths from Western intervention in Iraq and Afghanistan since the 1990s — from direct killings and the longer-term impact of war-imposed deprivation — likely constitute around 4 million (2 million in Iraq from 1991-2003, plus 2 million from the ‘war on terror’).”

And the horror of sanctions continues with the Trump administration’s extension of sanctions on Zimbabwe, announced March 4. Why? Because apparently Zimbabwe is an “unusual and extraordinary threat.” Trump did this despite South African President Cyril Ramaphosa requesting he not extend sanctions and allow the country to recover.

Zimbabwe’s economy has been sabotaged by U.S. and British sanctions since 2001 to punish its government for acknowledging the will of the people to take back land stolen by the minority white population that previously benefited from decades of colonialism and apartheid rule. The Zimbabwean Democracy and Economic Recovery Act (ZIDERA), a bi-partisan bill supported by Hillary Clinton and Joe Biden, attempted to cut off international loans and institute other economic sanctions.

When Zimbabwe, formerly called Rhodesia, achieved its true independence in 1980, this lay the basis for the most democractic form of government up to that point, as witnessed by the redistribution of land, mostly to the poorest sectors, and contributed to the support and popularity of elected President Robert Mugabe.

In a November 2018 article in African Arguments, Tendai Murisa and Shantha Bloemen report: “18 years since the land seizures, the landscape in Zimbabwe has dramatically changed. Instead of 6,000 commercial farmers controlling 70 percent of valuable farmland, there are an estimated 200,000 new small-scale farmers. In 2018, the country experienced its largest tobacco harvest ever. This new reality on the ground is accepted by most Zimbabweans, both white and black.”

It’s also telling that Trump’s extension of ZIDERA includes new provisions, passed by Congress last July, demanding a reversal of the land reform with “reparations” amounting to $30 billion to be paid to white farmers.

Murisa and Bloemen continue: “As South Africa and Namibia currently debate how to address historical injustices around land, Zimbabwe’s harsh treatment could be seen as a threat for what not to do.

“Adding weight to these suspicions, President Trump tweeted his concerns about South Africa’s land reform process shortly after signing ZIDERA into law. He is reported to have been informed by fringe white farmer lobbies in South Africa, who have growing alliances with white supremacist groups in the U.S.”

Yemen: an embarrassment of war and sanctions

Despite the fact that 18 million people are expected to starve as a result of the U.S.-Saudi war against Yemen, Washington, the European Union and the U.N. continue sanctions against that country.

Supposedly, these measures are meant to stop al-Qaida. However, the arms embargo and asset freeze are directed primarily against the forces that are actually fighting al-Qaida — and also fighting the U.S.-Saudi alliance. The Associated Press reported on Aug. 6 that al-Qaida, Saudi Arabia and the U.S. have been working together against the Ansar Allah (otherwise known as Houthis).

The horrendous starvation estimates received wide attention that demanded a reaction from U.S. politicians, who designed a deceptive bill lauded as ending U.S. involvement in the war against Yemen. In fact, on April 4, the House of Representatives passed the bill introduced by Sen. Bernie Sanders that would invoke the War Powers Act.

Unfortunately, and deliberately, one of the bill’s biggest loopholes allows military actions to continue due to the presence of al-Qaida in the area. Since the U.S. and Saudi Arabia are actually working with al-Qaida, it’s business as usual, by design — even if President Trump doesn’t veto the bill.

Today’s version of endless wars started in Iraq. That nightmare of sanctions and war was justified by false U.S. government assertions that Saddam Hussein had “weapons of mass destruction,” bolstered by the corporate media and even individuals and organizations on the left who, uncritical and unprincipled, would rather go with the State Department narrative to avoid any accusations of siding with dictators or terrorists.

These are similar to the “critical” voices that echo Washington’s attacks against Venezuela’s Bolivarian government regarding “flawed” elections. Never mind that all observers of the elections, from trade union officials to social justice organization leaders, lauded the process.

A recurring argument used by “left” critics and even some so-called socialists, and thus justifying the ire of the U.S., is that opposition candidate Henrique Capriles Radonski was disqualified from running in the 2018 Venezuelan presidential election.

They say that while Capriles was accused of illegally fomenting violence by encouraging a right-wing crowd to storm the Cuban Embassy and threatening diplomats with violence during the 2002 coup attempt against then-President Hugo Chávez, he was “cleared” of all charges.

Actually, there is video evidence showing Capriles — then mayor of Baruta, a wealthy district of Caracas — climbing the walls of the embassy, leading the attack. Capriles tried to force Cuban diplomats to turn over the vice president and other government officials to the crowd. The Cuban diplomats refused, and fortunately, massive demonstrations of the Venezuelan people in support of Chávez ended the U.S.-encouraged coup.

Capriles’ organization had previously received hundreds of thousands of dollars from the U.S.-sponsored National Endowment for Democracy and the International Republican Institute.

So, was he cleared of those charges? No. He did commit those acts. However, he benefited from an amnesty by President Chávez in 2007 for all of those who participated in the coup attempt, which granted him a pardon.

Does that mean the Venezuelan people don’t have the right to decide that he may be unqualified to run for president, being a known violent traitor and agent of U.S. imperialism?

The movement to build solidarity with the Venezuelan people, or the people of Zimbabwe, Iran, Yemen, People’s Korea, Iraq, Libya and Afghanistan, or anywhere else that the nightmare of U.S. war and sanctions is occurring, will not benefit from repeating the lies of the U.S. State Department to justify its means of mass murder.

What’s needed is to expose the truth that facilitates building a united movement to defeat the greatest threat to humanity today: U.S. imperialism!