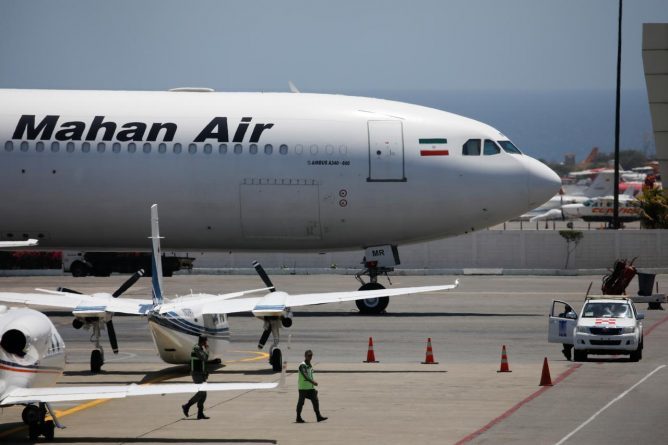 The Trump administration withdrew from the Iran nuclear agreement last May and tightened sanctions against the Venezuelan government starting in January, prompting both Tehran and Caracas to look for ways to get around the tough US illegal unilateral sanctions.

Mahan Air, Iran’s second-largest airline, has begun offering direct flights to Venezuela, with the first flight taking off from Tehran on Monday with a foreign ministry delegation on board, the Islamic Republic News Agency (IRNA) has reported.

The private airline reportedly has nothing to fear in terms of retaliatory US sanctions, since it was already blacklisted by Washington in 2011 amid US claims that it provided logistical support to the Islamic Revolutionary Guard Corps, an Iranian military unit which the US has recently mulled designating as a foreign ‘terrorist organisation’.

Mahan Air was recently forced to stop its flights to destinations in France and Germany over alleged logistics flights to Syria in support of the Syrian military and its anti-terrorist operations. But mostly due to US pressures on their European counterparts under the alleged connection of the airline with the just sanctioned Islamic Revolutionary Guard, not proven by any means.

Iranian Civil Aviation Organisation spokesman Reza Jafarzadeh confirmed that the new route was established on early Monday morning, with the first non-stop Tehran-Caracas flight expected to take about 16 hours. It’s not clear at this point how many times a week the back and forth flights will occur.

The first flight is said to be carrying Mohsen Baharvand, the director of the Iranian Foreign Ministry’s department for the Americas, who is expected to touch down in Caracas later Monday to discuss the current state of affairs in the Latin American nation with his Venezuelan counterparts.

This is not the first time Venezuela and Iran establish airline connections. Between 2007 and 2010 the two countries through a partnership between Conviasa and Iran Air, the first connection was established with join flights between Caracas and Tehran with a stopover Damascus. During that time the US attacks on the route were also very common.

The Trump administration unilaterally withdrew from the 2015 Iran nuclear deal in May 2018, slapping the Middle Eastern country with several rounds of increasingly tough sanctions and threatening to bring the country’s oil revenue down “to zero.” In January, the US imposed crippling sanctions on Venezuela’s oil industry and confiscated government assets abroad as part of an unsuccessful bid to see opposition leader and self-proclaimed ‘interim president’ Juan Guaido take power.

Tehran was one of about 50 countries which denounced US meddling in Venezuela at the UN in February, and has voiced its support for the country’s democratically elected government.

#Iran has resumed a daily flight to #Venezuela.

Unless Iran has suddenly become a major source of international tourists this is yet another reason why the #MaduroRegime is a national security threat to the U.S. https://t.co/OPH5BWj2KI

Reuters refers to undisclosed US officials complaining about this new route thinking they have a say on the sovereign decisions of the Iranian and Venezuelan governments. Even Florida Senator Marco Rubio, an extremist right-wing actor currently very influential in White House decision-making, tweeted: “Unless Iran has suddenly become a major source of international tourists this is yet another reason why the #MaduroRegime is a national security threat to the U.S.”