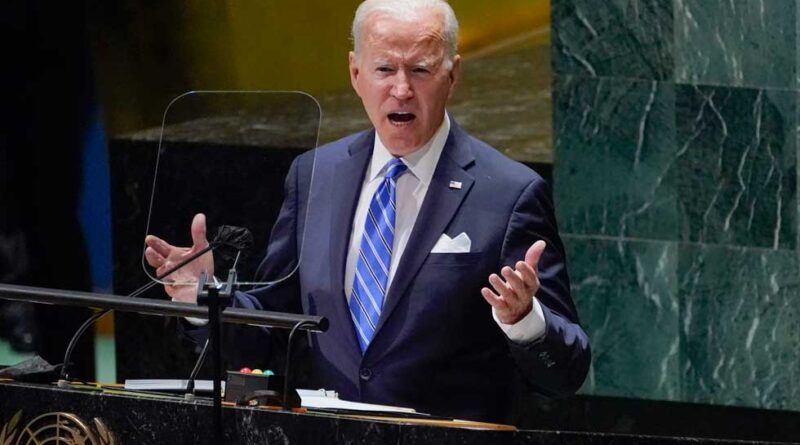 This original article by Friends of Socialist China co-editor Carlos Martinez analyses the recently-announced AUKUS military pact in the context of the Biden administration’s aggressive foreign policy. The article points out that any pro-peace hopes in Biden have been comprehensively dashed; this administration is pursuing an imperialist New Cold War with all the zeal of its predecessor.

After four years of Trump’s unhinged anti-China rhetoric, combined with the intensification of US diplomatic and economic attacks on China, many people on the left and in the anti-war movement breathed a sigh of relief upon Joe Biden’s arrival in the White House.

Gone were such fanatical China hawks as Mike Pompeo, John Bolton, Stephen Bannon, Robert Lighthizer and Peter Navarro. Gone was the bombastic and openly demagogic style of the far-right Republican administration, with its racism, its blackmail, its threats. Perhaps it would now be possible to end the trade war; to accept China’s emergence as an important global power; to build an environment conducive to urgently-needed cooperation on climate change, pandemics, nuclear proliferation and peace.

The leopard has not changed its spots
Such hopes were misplaced, and have since been comprehensively dashed. As Demetri Sevastopulo noted in the Financial Times back in April, “Joe Biden’s hawkish stance on China has been much closer to that of his predecessor Donald Trump than experts had predicted.” Biden has made it abundantly clear that he has every intention of continuing – and indeed escalating – the New Cold War against China, stating: “China has an overall goal to become the leading country in the world, the wealthiest country in the world and the most powerful country in the world; that’s not going to happen on my watch.”

One of the Biden team’s first acts in the realm of foreign policy was to work to undermine the EU-China investment deal, which is currently still frozen. Nine months into Biden’s administration and there is no sign of Trump’s trade war being dropped, in spite its manifest failure to revive US manufacturing. Biden continues to repeat Trump’s talking points about China’s “coercive and unfair” trade practices and its “abuses of the international system.”

Meanwhile the US continues to ramp up its military presence in the South China Sea. The US Coast Guard has commenced a massive upgrade of its fleet, for the specific purpose of “countering China’s growing influence in the region.” This has been combined with increased weapons sales to Taiwan.

Facing the reality of US defeat in Afghanistan, you might expect the US military budget to decrease somewhat, and yet even the relatively moderate proposal by Bernie Sanders to reduce military expenditure by 10 percent has been met with resolute, bipartisan opposition. In fact Biden’s 715 billion dollar defence budget will be the largest in history, making a mockery out of his widely lauded infrastructure plan, which commits to spending 3.5 trillion dollars over 10 years – meaning that he proposes to spend more than twice as much on the military as on solving the most basic needs of the American people.

The information warfare against China has if anything accelerated under Biden. His insistence on spreading conspiracy theories about Covid’s origins – dismissing the WHO’s findings that a lab leak was “extremely unlikely” and ordering US intelligence services to conduct a separate investigation focused on the Wuhan Institute of Virology – is nothing more than a sugar-coating of Trump’s flagrant ‘kung flu’ racism. When Trump first put proposed the lab leak hypothesis, Democrats correctly dismissed it as a conspiracy theory; now in the driving seat of the New Cold War, these so-called progressives have chosen to take the same road.

The Democratic administration and its media supporters have amplified the crazed accusations of Mike Pompeo about genocide in Xinjiang. In the first week of the administration, national security adviser Jake Sullivan warned that the US would “impose costs for what China is doing in Xinjiang, what it is doing in Hong Kong, for the bellicosity and threats that it is projecting towards Taiwan”. Accusing China of “genocide and crimes against humanity” – on the basis of extremely dubious evidence that has been comprehensively debunked (for example by The Grayzone and the Eurispes Institute of Political, Economic and Social Study) – the US, EU, UK and Canada co-ordinated to impose sanctions on China. The Western media has ramped up its slander campaign in order to win broad public support for anti-China actions at an economic, political, diplomatic and military level.

In summary, as Danny Haiphong has observed, when it comes to the New Cold War, Joe Biden is “a Democrat with Trumpian Characteristics.” The imperialist leopard has not changed its spots. Biden is just as committed as his predecessors were to the preservation and expansion of the US-led imperialist world system. The New Cold War on China constitutes the cornerstone of this bipartisan strategy.

AUKUS and the attempted rebuilding of an imperial alliance against China
Trump’s bluster, his crudity and his unfiltered aggressive nationalism served to alienate some of the US’s traditional allies. The longstanding coalition of advanced capitalist countries – the US, Canada, Western Europe, Australia and Japan – started to fracture under the weight of Trump’s refusal (or inability) to convincingly pretend that neoliberal imperialist plutocracy is good for everyone.

Once installed in the White House, Joe Biden lost no time in declaring that “diplomacy is back” and that he would work to “repair our alliances” in order to “confront China’s economic abuses; counter its aggressive, coercive action; to push back on China’s attack on human rights, intellectual property, and global governance.” In particular he promised to coordinate with “other democracies” to contain China.

In June, Biden travelled to the NATO and G7 summits in order to promote this anti-China alliance and to reiterate the importance of a “rules-based international order” A genuinely independent press might have queried whether the phrase “rules-based international order” should actually refer to the existing framework of international law as defined by the United Nations – of which, for example, the US’s wars, drone strikes and unilateral sanctions are a clear violation. Needless to say, such analysis was noteworthy by its absence.

The Quad alliance (the ‘Quadrilateral Security Dialogue’ of the US, Japan, Australia and India), dormant for nearly a decade, was revived by Trump in 2017 as an ‘Asian NATO’ with a mandate to increase military pressure on China. Biden’s administration is picking up this ball and running with it – “making the Quad the core dynamic of its Asia policy.” Biden convened the first leaders’ summit of the Quad in March, and on 24 September 2021 the Quad holds its first ever in-person leaders’ summit.

The latest move in this deepening New Cold War is the announcementon 15 September 2021 of AUKUS – a trilateral security pact between Australia, the UK and the US. The pact is designed to “deepen diplomatic, security, and defense cooperation in the Indo-Pacific region” and involves cooperation on cyber warfare, underwater capabilities, and long-range strike capabilities.

The composition of the AUKUS pact serves to expose its nature as a colonial throwback. Boris Johnson may try to present the three countries’ core commonality as being “English-speaking maritime democracies”, but what the world sees is an “alliance of white colonial states” attempting to reassert imperial hegemony and keep the natives in line.

The pact’s most obvious practical significance is in improving Australia’s ability to police the Pacific on behalf of US-led imperialism – specifically, with the aid of nuclear-powered submarines. Julian Borger and Dan Sabbagh write that “the aim is to put Australia’s currently diesel-powered navy on a technological par with China’s navy.”

Nobody is in any doubt that AUKUS is part of a strategy to contain and encircle China. Kate Hudson, General Secretary of the Campaign for Nuclear Disarmament (CND), observes: “this major new multifaceted defence agreement between the US, UK and Australia sees the latter firmly jump into the US camp and the former strengthen and renew its Pivot to Asia through unashamedly militaristic means.” Gideon Rachman, writing in the Financial Times, describes it as being “ultimately aimed at deterring Chinese power, much as NATO deters Russia in Europe” (Rachman of course considers this a good thing).

Former Australian Prime Minister Paul Keating argued vociferouslyagainst Australia’s membership of such a pact, on the basis that it would induce a “further dramatic loss of Australian sovereignty” and that its only objective – “to act collectively in any military engagement by the US against China” – runs counter to Australia’s basic interests.

The provision of nuclear-powered submarines to Australia certainly violates the spirit – and quite possibly the letter – of the Treaty on the Non-Proliferation of Nuclear Weapons (NPT), involving as it does the provision of weapons-grade enriched uranium to a non-nuclear weapons state. Kate Hudson points out that the NPT “stipulates that any sharing of nuclear technology must be ‘for peaceful purposes’, and a military pact does not have ‘peaceful purposes’”.

Given these nuclear submarines will doubtless be deployed in and around the South China Sea and the Taiwan Strait, AUKUS adds significantly to the threat of the New Cold War turning extremely hot. As the spokesperson of the Chinese embassy in Britain put it: “The AUKUS military partnership and cooperation on nuclear submarines risk intensifying global arms race, crippling international non-proliferation efforts and severely undermining regional peace and stability.” Even New Zealand, a fellow “English-speaking maritime democracy”, is keeping its distance from AUKUS, stating that Australia’s new nuclear-powered submarines will be banned from New Zealand waters.

Build opposition to the New Cold War
It is an inescapable fact that the Biden administration does not plan to end the New Cold War or pursue a cooperative, multipolar foreign policy. The US remains a hegemonist power, armed to the teeth and ready to risk humanity’s future for the sake of preserving the imperialist status quo.

The fight against the New Cold War therefore requires a global alliance of the socialist countries, the developing world, the working class and oppressed communities in the imperialist heartlands; alongside the peace movement, the environmental movement, and all forces that can be united to oppose this reckless strategy. Cold War benefits only a tiny handful of people. Meanwhile humanity face global problems that require global solutions: climate change, containment and prevention of pandemics, microbial resistance, and the threat of nuclear confrontation.

Kishore Mahbubani puts the case simply and eloquently in his recent book, Has China Won?: “If climate change makes the planet progressively uninhabitable, both American and Chinese citizens will be fellow passengers on a sinking ship.”

The cooperation we urgently need cannot be built in an atmosphere of fear and distrust, in the context of a New Cold War and a relentless slander campaign. Those of us in the West must demand of our governments and media that they cease their hysterical hostility towards China, stop demonising China, stop attempting to prevent its rise, stop constructing military alliances against it, and start creating an environment conducive to deep and lasting cooperation.

China’s approach to international relations provides an example for others to follow: “No matter how the international landscape evolves, China will resolutely safeguard UN’s core role in international affairs, stay firmly on the right side of history, strive to build a community with a shared future for mankind, join hands with all progressive forces in the world, and work tirelessly to advance the noble cause of peace and development for humanity.”

Let us consolidate and expand our forces, and put our shoulders to the wheel of ending the New Cold War.