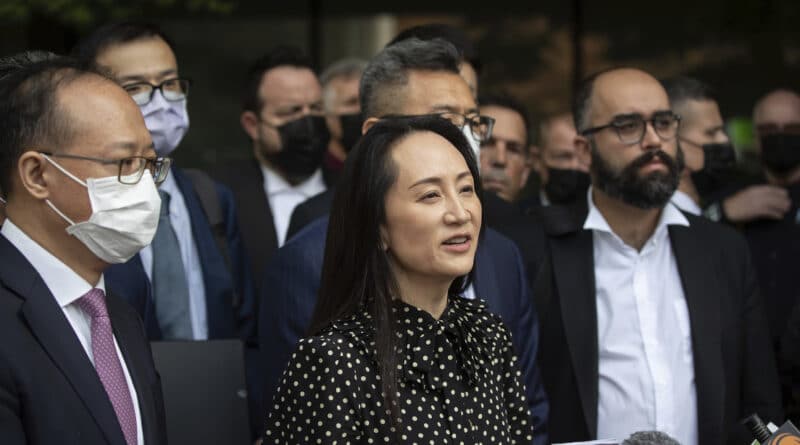 The Canadian Ministry of Justice confirmed that the executive is free to leave the country.

The decision of the Deputy Judge of the Supreme Court of the province of British Columbia, Heather Holmes, came a few hours after Meng agreed to “deferred prosecution” with the United States to avoid fraud charges for serious crimes.

The Canadian Ministry of Justice confirmed that the executive is free to leave the country.

“Over the past three years, my life has been turned upside down,” said the Huawei CFO. “It was a disruptive time for me as a mother, a wife and a company executive. But I believe every cloud has a silver lining. It really was an invaluable experience in my life… As the saying goes, the greater the difficulty the greater the growth.”

“Huawei Confidential”
Meng was detained at Vancouver International Airport in December 2018 on a US arrest warrant, and was charged with bank and wire fraud charges for allegedly misleading HSBC (HSBA.L) about the business of the telecommunications giant in Iran, first reported in 2012.

All US allegations are based on its illegal imposition of unilateral sanctions against Iran as part of its campaign against the Islamic Republic. Meng Wanzhou’s arrest also fit into the US-led New Cold War, in which it tries to label the Asian giant as a threat to the world.

As reported by Reuters in 2012 and 2013, Hong Kong-registered Skycom featured prominently in the US criminal case against her. The UK-based propaganda corporation reported that Skycom Tech, closely connected to Huawei, had offered to sell at least €1.3 million worth of Hewlett-Packard computer equipment to Iran’s largest mobile operator in 2010, thus violating the terms of the US and EU economic blockade. At least 13 pages of the proposal were marked as “Huawei confidential,” and bore the logo of the Chinese tech giant. This occurred within the framework of the illegal coercive measures issued by the US against Iran, to the detriment of the nation’s economy and the quality of life of its citizens, in order to restrict its nuclear program.

Reuters disclosed numerous financial and personnel ties between Huawei and Skycom, including the fact that Meng had served on Skycom’s board of directors between February 2008 and April 2009.

In 2019, the US included Huawei on a commercial blacklist that restricts sales to the company for any activities contrary to the interests of US national security and foreign policy. The criminal case against Meng and the tech company is based on the blacklist. The company is accused of operating as a criminal enterprise, stealing trade secrets and defrauding financial institutions. For its part, Huawei pleaded not guilty.

These attacks against the Chinese giant came at a time when Washington was in an open offensive to expel China and Huawei from the 5G network market in Europe and other parts of the world. Many analysts claimed that the extradition against Meng Wanzhou was part of a desperate US offensive after its loss of markets now occupied by the expanding Chinese economy.