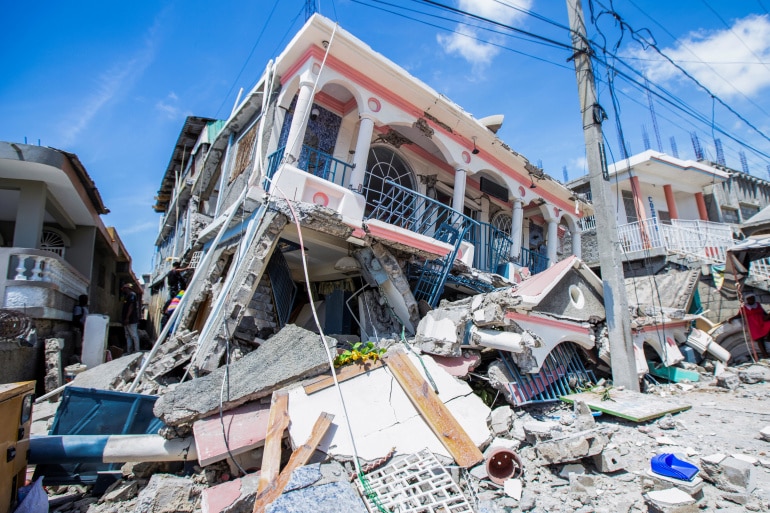 With “friends” like Canada, Haiti is in deep trouble.

Justin Trudeau’s statement that this country was “standing ready” to assist after a massive earthquake rocked the western part of Haiti yesterday is not reassuring. Over the past two decades Canada has done too much to undermine Haitian sovereignty, democracy and living standards to be considered trustworthy amidst this tragedy.

Canada is a country with immense resources to help with a 7.2 magnitude earthquake and it’s not too far geographically from Haiti. Undoubtedly, the Caribbean nation requires international solidarity to assist with an earthquake that’s killed over 700, injured thousands and left many more homeless. But Canada should definitely not deploy troops to the impoverished Caribbean nation and we must be suspicious of NGOs seeking to fundraise off of the tragedy.

Adding to the need for caution are statements from Washington. The head of USAID, Samantha Power, tweeted that she talked to the head of US Southern Command about how the US Department of Defense could assist Haiti.

In a worse humanitarian situation, a decade ago, Ottawa dispatched soldiers to dominate that country. Immediately after a horrific quake hit Port-au-Prince in 2010 decision makers in Ottawa were more concerned with controlling Haiti than assisting victims. To police Haiti’s traumatized and suffering population, 2,050 Canadian troops were deployed alongside 12,000 US soldiers (8,000 UN soldiers were already there). Though Ottawa rapidly deployed 2,050 troops they ignored calls to dispatch this country’s Heavy Urban Search and Rescue (HUSAR) Teams, which are trained to “locate trapped persons in collapsed structures.”

According to internal government documents the Canadian Press examined a year after the disaster, officials in Ottawa feared a post-earthquake power vacuum could lead to a “popular uprising.” One briefing note marked “secret” explained: “Political fragility has increased, the risks of a popular uprising, and has fed the rumour that ex-president Jean-Bertrand Aristide, currently in exile in South Africa, wants to organize a return to power.” Six years earlier the US, France and Canada ousted the elected president.

Canada and the US’ indifference/contempt towards Haitian sovereignty was also on display in the reconstruction effort. Thirteen days after the quake Canada organized a high profile Ministerial Preparatory Conference on Haiti for major international donors. Two months later Canada co-chaired the New York International Donors’ Conference Towards a New Future for Haiti. At these conferences Haitian officials played a tertiary role in the discussions. Subsequently, the US, France and Canada demanded the Haitian parliament pass an 18-month long state of emergency law that effectively gave up government control over the reconstruction. They held up money to ensure international control of the Interim Commission for the Reconstruction of Haiti, authorized to spend billions of dollars in reconstruction money.

Most of the money that was distributed went to foreign aid workers who received relatively extravagant salaries/living costs or to expensive contracts gobbled up by Western/Haitian elite owned companies. According to an Associated Press assessment of the aid the US delivered in the two months after the quake, one cent on the dollar went to the Haitian government (thirty-three cents went to the US military). Canadian aid patterns were similar. Author of The Big Truck That Went By: How the World Came to Save Haiti and Left Behind a Disaster Jonathan Katz writes, “Canada disbursed $657 million from the quake to September 2012 ‘for Haiti,’ but only about 2% went to the Haitian government.”

Other investigations found equally startling numbers. Having raised $500 million for Haiti and publicly boasted about its housing efforts, the US Red Cross built only six permanent homes in the country.

Not viewing the René Preval government as fully compliant, the US, France and Canada pushed for elections months after the earthquake. (Six weeks before the quake, according to a cable released by Wikileaks, Canadian and EU officials complained that Préval “emasculated” the country’s right-wing. In response, they proposed to “purchase radio airtime for opposition politicians to plug their candidacies” or they may “cease to be much of a meaningful force in the next government.”) With rubble throughout Port au Prince and hundreds of thousands living in camps, Foreign Affairs Minister Lawrence Cannon demanded Préval hold elections by the end of the year. In May 2010 Cannon said, “the international community wants to see a commitment, a solid, serious commitment to have an election by the end of this year.” (With far fewer logistical hurdles, it took two years to hold elections after the 2004 US/France/Canada coup.)

As a result of various obstacles tied to the earthquake and a devastating cholera outbreak introduced to the country by negligent UN troops in October 2010, hundreds of thousands were unable to vote during the first round of the November 28, 2010, election. After the first round of the presidential election the US and Canada forced Préval party’s candidate out of the runoff in favor of third place candidate, Michel Martelly. A supporter of the 1991 and 2004 coups against Aristide, Martelly was a teenaged member of the Duvalier dictatorship’s Ton Ton Macoutes death squad. As president he stole millions of dollars as part of the massive Petrocaribe corruption scandal and imposed as his successor the repressive and corrupt Jovenel Moïse who was recently assassinated. The assassination of president Moïse reflects the disintegration of Haitian politics after a decade of foreign intervention that has strengthened the most regressive and murderous elements of Haitian society.

After the 2010 earthquake there was an outpouring of empathy and solidarity from ordinary Canadians. But officials in Ottawa saw the disaster as a political crisis to manage and an opportunity to expand their economic and political influence over Haiti.

Let’s not allow that to happen again. Unfortunately, when the prime minister says Canada is “standing ready” it sounds more like a threat than an offer of real assistance.