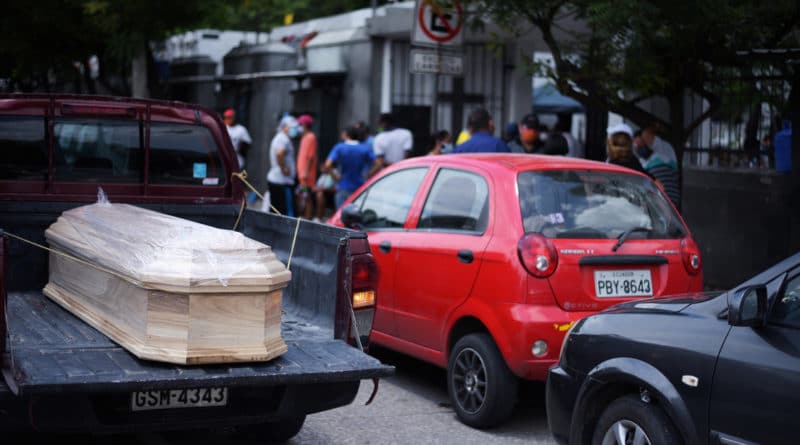 The causes of these deaths, which occurred amid an overload of the hospital system in the capital of the province of Guayas, are unknown.

More than 700 dead bodies were removed from numerous houses in Guayaquil, the city most affected by the coronavirus pandemic in Ecuador, [according to] Jorge Wated Reshuan, director of BanEcuador and leader of the Task Force responsible for collecting corpses in the city.

“The number that we have collected, with the task force in homes, exceeded 700 people,” said Wated, whose words are reported by AFP.

The agency notes that, faced with the inability of several citizens to bury their relatives, the authorities took on this task. In this context, Wated stated that they identified the remains of 600 people and buried them in 2 city cemeteries.

The causes of these deaths, which occurred while the capital of the province of Guayas suffers from a collapse of the hospital and funeral systems due to a large number of coronavirus cases (about 4,000) are unknown. At the same time, in Guayas 72% of the more than 7,400 cases in the entire country are concentrated. To date, 333 people have died from covid-19 in Ecuador, according to official figures.

For his part, the president of Ecuador, Lenín Moreno, announced this Wednesday that his government will file a complaint with the State Attorney General’s Office “so that the mismanagement of the deceased in hospital morgues is investigated.”

“We will not allow anyone to be buried without their identification. They are brothers who deserve a send off with dignity!” Moreno said on Twitter.

Featured image: A truck carrying a coffin near a cemetery in Guayaquil, Ecuador, on April 12, 2020. Vicente Gaibor del Pino / Reuters