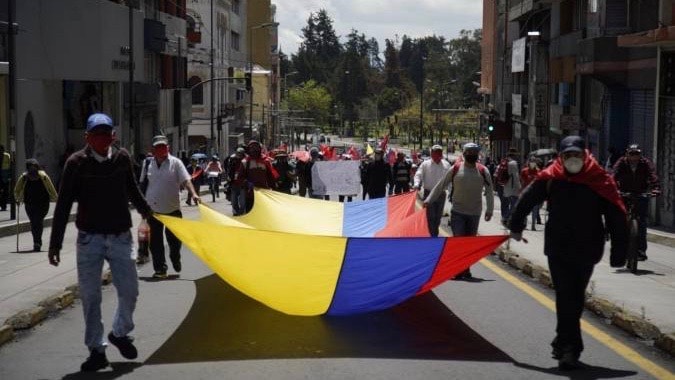 The national government announced that it will shut 10 public companies, withdraw subsidy on diesel and petrol, and reduce public sector workers’ salaries by 25%

On May 20, several Ecuadorian social movements, Indigenous organizations and trade unions called for a national mobilization on May 25, against the neoliberal economic policies imposed by President Lenín Moreno in the midst of the COVID-19 pandemic. The People’s Front, the Confederation of Indigenous Nationalities of Ecuador (CONAIE), the Indigenous and Peasant Movement of Cotopaxi (MICC), the Unitary Front of Workers (FUT), among others, are the organizations behind the call for national mobilization.

On May 19, Moreno announced a new set of austerity measures, involving a budget cut of 4 billion USD in public sectors, “to avoid the collapse of the economy” in response to the crisis caused by the coronavirus disease.

Moreno announced that at least 10 public companies will be closed or merged, which include the Tame airline, a railway company, a postal company, a real estate company, an agricultural company and a public media company.

Social movements denounced that the liquidation of public companies would lead to the dismissal of over 12,000 public servants, increasing unemployment and social inequality in the country.

The head of state also eliminated the subsidy on diesel and petrol and installed a fuel pricing system, which would decide the price of oil based on its cost in the international market, with a fluctuation margin of 5%. Currently, the measure has reduced the price of petrol from 1.85 to 1.75 USD a gallon and of diesel from 1.03 to 1 USD.

However, the social leaders questioned the pricing system, arguing that when oil prices return to normal in the international market, the rise in price of oil will hit the pockets of the Ecuadorian working class since an increase in fuel prices causes a rise in prices of everything, including basic food products and medicines.

Moreno also announced that the working hours for public employees would be reduced by 2 hours (from 8 to 6 hours) and accordingly their salaries would also be reduced. Local media reported that the employees would experience an average reduction of 25% in salaries. This measure would not apply to health workers, the police and the armed forces, and other security officials.

The president argued that the reduction in the number of public employees and their salaries would help the country to take additional external debt to deal with the pandemic. “We will save 1.3 billion USD and that would allow us to receive 1.4 billion USD from multilateral organizations under very favorable conditions,” said Moreno.

In addition, the Ecuadorian government announced that it will close its consulate in Venezuela, its office in the Andean Parliament, and its embassies in Iran, Malaysia and Nicaragua.

Social and trade unions leaders denounced that the economic reforms are aligned with the recommendations made by the International Monetary Fund (IMF) in 2019 to guarantee the payment of its 4.2 billion USD loan with the country. Its decision to close diplomatic offices in Venezuela, Iran and Nicaragua also seems to obey US orientations as those countries have been declared enemies of the US.

In a tweet, the CONAIE said that “President Lenin Moreno and economic minister Richard Martínez are executing an economic shock in Ecuador: free market and aggressive neoliberal policies: reduction of salaries, layoffs, unemployment, dismantling of the public sector, privatization, cuts in education, elimination of subsidies,” denouncing the announced policies.

The National Union of Educators (UNE) and the Federation of University Students of Ecuador (FEUE), which have been mobilizing against the budget cuts in the higher education sector since the beginning of this month, also rejected these neoliberal measures and announced that it will join the national protest on May 25.

On May 18, a massive protest was held in the capital Quito in the anticipation of the announcement of these measures. Hundreds of students, education workers and members of social organizations, respecting all sanitary measures, gathered outside the headquarters of the Ecuadorian Institute of Social Security (IESS) and marched till the Central Bank of Ecuador, denouncing the national government’s anti-people policies.

This is the third time in two months that the Ecuadorian government has implemented austerity measures using the pandemic as a pretext to promote the IMF’s agenda in the country. On May 3, Moreno announced a budget cut of around 100 million USD in public education to supposedly alleviate the economic crisis aggravated by the spread of the coronavirus in the country. Earlier, on March 10, when the spread of the coronavirus was under control in the country, Moreno announced a budget cut of 1.4 billion USD, two new external loans of 2.4 billion USD and a 0.75% increase in companies’ income tax, among several other measures.

In addition to austerity, Ecuadorians have also been hit by a wave of corruption amid the economic and health emergencies. In recent weeks, the Attorney General’s Office has revealed that face masks are being sold for 12 USD in the country, when they should have cost 4 USD. The same is happening with body bags, which are being sold for more than $148 USD and should be worth $12 USD. Meanwhile, basic food products are being sold for almost double their value.

Featured image: Hundreds of Ecuadorians carried out a massive protest against the government’s anti-people policies in Quito on May 18. Photo: El Universo