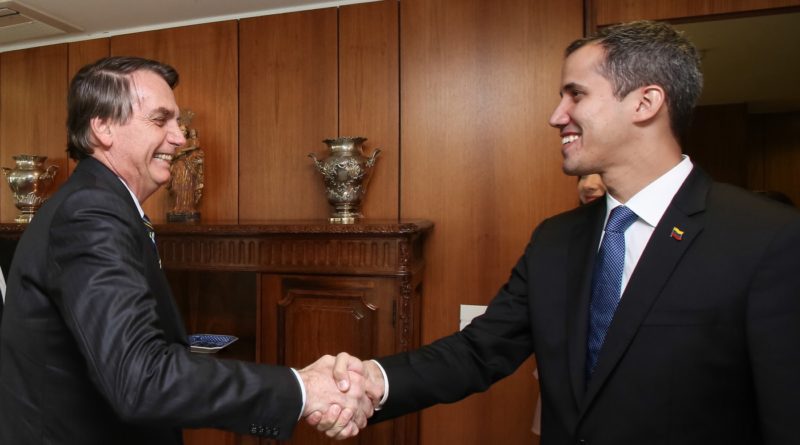 Editorial note: In this great analysis the only thing left out is the visit of Jair Bolsonaro to Washington a few days after the visit of Colombia’s Ivan Duque and a few days before Guaido’s own visit. Political analysts in Venezuela see this as evidence of a meeting with the boss in the White House to receive instructions. Bolsonaro even dared to visit the headquarter of the Southcom in the state of Florida.

The investigations after the failed coup in Venezuela leave no doubt about the participation of the Iván Duque government, as well as its alliances with drug trafficking to provide logistical resources to mercenaries organized by the Silvercorp company in Colombian territory.

However, there is an element described in the clauses of the contract signed by Guaidó and the military contractor Silvercorp that accounts for the role that the government of Jair Bolsonaro would play once the assassination against President Nicolás Maduro was executed and the US occupation forces were effectively in Venezuela.

The Brazilian de Fato reviews a fragment of the 42 pages of the contract, where it refers to territory and Brazilian authorities.

In detail, Operation Gideon would have no restriction on entering Brazilian territory if confrontations with “hostile forces” required it (one of the objectives derived from the assault on power is the persecution and murder of Chavismo in all its organizational forms within the Venezuelan State).

As with Colombia, Silvercorp’s mercenary army (supported by armies and other foreign paramilitaries) could enter Brazil’s air, land, and sea space without authorization of the Brazilian state.

For this supposed scenario to occur, the subordination of Brazilian authorities to the White House plan would be necessary. Knowing Bolsonaro’s support for the coup agenda since Juan Guaidó’s self-proclamation, it would not be strange for Brazil to intervene as yet another factor in the outsourced war in our country.

Brasil de Fato relates a chronology to connect various events that have arisen since 2018. Viewed from the context of the failed incursion, they reconfirm that the US satellite countries in the region, far from working for “democracy in Venezuela”, support criminal causes to violate its territorial integrity.

Firstly, Silvercorp’s visit to Brazil during the 2018 presidential elections is striking , a fact that was published by BrasilWire. The website says:

“Examination of Silvercorp and its staff’s social media accounts revealed that the company was present during the elections, in which the US-backed far-right candidate Jair Bolsonaro came to power (…) Silvercorp published from its Instagram on October 18, 2018 – 11 days after the first round of the elections, and 10 days before the second round – that they were leaving Brazil, after a not specified stay length”.

In 2019, two events stand out from Brazil’s Fato timeline.

The first is related to the connections established by the now former Minister of Justice and Public Security, Sergio Moro, between the Brazilian security agencies and the United States Federal Bureau of Investigation (FBI), an element that is part of the political judicialization that led to the neutralization of the left in Brazil under an alleged fight against corruption (lawfare).

“On September 6 and 7 of last year, the FBI offered training in the fight against corruption and transnational bribery with agents of the Federal Prosecutor’s Office (MPF) and the Union’s Internal Revenue Service, as revealed in a report from the Public Agency,” the Brazilian portal reports.

The United States Department of Justice made the outsourced war against Venezuela viable in March (this year) under a similar approach of criminalizing Nicolás Maduro and other high-level Venezuelan officials, accusing them of drug trafficking crimes.

The other event was the participation of Brazil in the activation of the mechanisms of the Inter-American Treaty of Reciprocal Assistance (TIAR) against Venezuela, along with 11 other member countries of the Permanent Council of the Organization of American States (OAS), including Colombia and the United States, September 11, 2019.

That day sanctions were agreed upon against the Venezuelan government under the allegation of “crimes of money laundering and drug trafficking. In addition to sharing information from military and financial intelligence, they also created a legal cooperation network to fight the alleged international crimes of the Bolivarian government office,” says the article by Brasil de Fato, written by Michele De Mello.

While this was taking place in the visible field of war, anti-Chavismo in Miami, Florida, covertly finalized the agreements with Silvercorp to arm the incursion into Venezuela, which were finally signed in a document on October 16, 2019 by Juan Guaidó, JJ Rendón, Sergio Vergara and Jordan Goudreau, owner of the mercenary firm.

The anti-Chavista agenda for 2020 began in Colombia with the Third Hemispheric Ministerial Conference to Combat Terrorism, which led to the false accusation against the Venezuelan government of sponsoring Hezbollah and the FARC, political organizations that the United States has labeled as “terrorists”. The event was led by the Secretary of State, Mike Pompeo, and opened the Guaidó international tour to coordinate with upcoming actors in Europe and the White House, the next irregular actions in Venezuela.

“In the final declaration, it was agreed (…) to renew its commitment to strengthen border control through the formation of joint teams, including investigation and financial intelligence teams, to locate, trace, recover and seize the assets of organizations considered criminal in their jurisdictions.”

A week later, Colombia and the United States would conduct military exercises at the US military base in Tolemaida, where members of the Brazilian military forces would participate as observers.

On March 5, in the month that Operation Gideon was supposed to be executed according to the confessions of those involved, the withdrawal of two diplomats from the Brazilian Embassy in Venezuela is announced, a decision made by Bolsonaro’s support for Guaido’s fake presidency.

He could not specify the same internally. When he decided to expel the Venezuelan consular corps in Brazil, the Federal Supreme Court suspended the order.

This disagreement between the state powers is part of the political crisis that the Brazilian president is going through, exacerbated by the erratic and irresponsible handling of the pandemic that has put the continental country in third place in the world with the most cases of Covid-19 and one of the highest mortality rates.

Although the intentions of the political groups related to Jair Bolsonaro in his country were in tune with the opinions of the White House, the coup conspiracies against Venezuela would find a retaining wall in the military corps.

Not only because, at the level of military relations, Venezuela and Brazil have held meetings that are far from Bolsonaro’s hostility, or that the Brazilian Armed Forces refused to support a US military invasion against Venezuela.

As mentioned before, the disastrous healthcare landscape in the Brazilian territory has set the institutions against the president’s decisions more firmly. Part of the military leadership and Brazil’s own vice president, retired general Hamilton Mourao, are distancing themselves from that crisis.