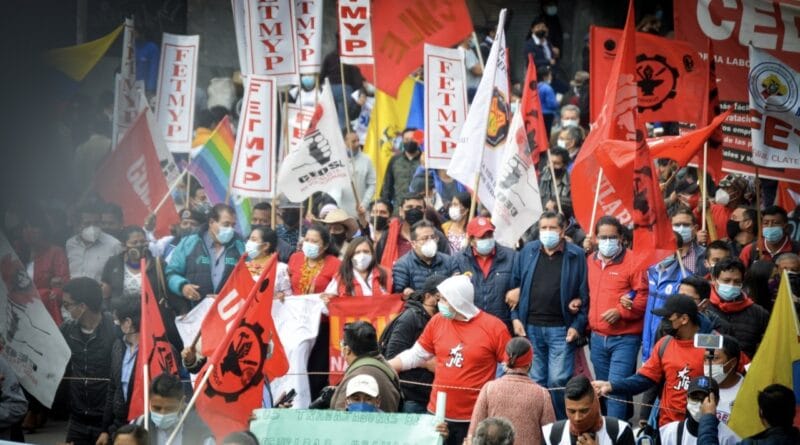 On October 18, 2021, Ecuador’s President Guillermo Lasso declared a state of emergency for 60 days. This declaration led to the constitutional rights of Ecuadorian nationals being suspended and heavily armed troops flooding the streets in Ecuador. The immediate reason for the declaration was the murder of an 11-year-old boy named Sebastián Obando, who was killed in a crossfire between “an armed robber and a police officer” on October 17 at a cafeteria and ice cream parlor in the Centenario neighborhood in Guayaquil.

The boy, who was shot three times, was shot in the heart, right arm and his back, said his father Tomás Obando. Lasso’s declaration of emergency built on the public outcry relating to this murder. The president said that he needed to suspend the constitutional rights of the people of Ecuador to confront the grip of the drug gangs on the country.

On October 19, US Secretary of State Antony Blinken arrived in Quito to provide US support for Lasso. Blinken met with Lasso, affirming the close ties between the United States and Ecuador. At a press conference held by Ecuador’s Foreign Minister Mauricio Montalvo and the US Secretary of State, Blinken said, “in democracies there are times when, with exceptional circumstances, measures are necessary to deal with urgencies and urgent situations like the one Ecuador is experiencing now.”

Lasso, who was elected in April, has presided over one extraordinary moment after another. The economy of Ecuador splutters as the government struggles to respond to an increase in violent incidents in the country. In September, a prison riot in the Litoral Penitentiary (Guayaquil) resulted in the loss of 116 lives. Earlier, in February 2020, a coordinated series of riots in four prisons led to the death of 79 inmates in Ecuador. Responding to the recent incident in September, Lasso declared a state of emergency inside Ecuador’s prisons, which was a precursor to the national emergency.

Structural problem, not extraordinary moment
Lasso’s decree suggests that there is something pressing taking place in Ecuador that requires action. Nela Cedeño, a youth leader of the Citizen Revolution of Ecuador, told us that Ecuador has been in a long-term crisis. Just this year, she says, there have been 1,213 murders, many of them unrelated to the drug trade. “The decree [state of emergency] is not justified,” Cedeño said. The data shows an “increase in violence in the country over the past six years, which we understand as a structural problem and not an exceptional situation,” Cedeño added.

Out of Ecuador’s approximately 18 million people, 5.7 million live “in poverty,” and out of “these 5.7 million people, about 2.6 million” Ecuadorians are living “in extreme poverty,” according to the National Institute of Statistics and Censuses. UNICEF calculates that three out of every 10 children in Ecuador under the age of two suffer from chronic child malnutrition. “The country is the second with the highest proportion in Latin America and the Caribbean, after Guatemala,” according to UNICEF. Everyday life in Ecuador deteriorated sharply ever since the implementation of an International Monetary Fund-driven austerity program under the previous President Lenín Moreno. Moreno’s agreement with the IMF in March 2019 resulted in widespread protests across the country.

As part of Moreno’s deal with the IMF, he cut government funding for health care, including firing 3,680 health care workers. As a result, in Guayaquil—where the prison riot had taken place and where Sebastián was murdered—dead bodies were left on the streets during the peak of the COVID-19 pandemic because the health care system was underfunded and overwhelmed. Guayaquil was the “epicenter of the outbreak” during April 2020 and Ecuador had one of the highest rates of COVID-19 in Latin America as a result of the broken health care system. Lasso, whose party only has 12 of 137 seats in the National Assembly, wishes to deepen the austerity program of Moreno; this program includes tax cuts for the wealthy and withdrawal of rights for workers as well as the allowance for foreign companies to continue to operate in Ecuador’s mining sector.

Lasso’s austerity agenda, Cedeño told us, does not solve the problems of the people. There is no agenda to tackle the precariousness of employment, the need for a minimum support price for farmers, the need for subsidies for fuel, the exploding social crisis in prisons, and the general problem of violence in society. The Lasso government is “politically incapable” of dealing with the real problems, so it takes refuge in the militarization of a social crisis, Cedeño said.

Militarization of a social crisis
Lasso’s emergency, Cedeño said, has not calmed a “terrified and worried citizenry.” In fact, it was even more frightening when Lasso fired his Defense Minister Fernando Donoso and replaced him with a former general, Luis Hernández. Putting the military on the streets of Ecuador and pushing for laws to allow them to operate without scrutiny (and to give them immunity of action) creates the conditions for a military dictatorship with a civilian fig leaf of a government. Lasso’s emergency decree gave amnesty to the security forces who, he said, are “unjustly condemned for their work.”

Since 2019, Ecuador’s social movements, including the Indigenous movement, have frequently taken to the streets to demand an alternative path. This year, Cedeño said, “we have had several stoppages and protests against the various measures adopted by the government of Lasso. Farmers, teachers, and transportation workers have been in the lead. Teachers [even] went on hunger strike.”

The decree by Lasso came, Cedeño pointed out, just when the people’s movements gave a call for social mobilizations against the rise in fuel prices and Lasso’s austerity proposals. “It is easy for us to assume that the state of exception [was] declared at the convenience of Lasso,” to protect his policies, and “not because of the violence that plagues the country.”

Protests against the emergency decree began on October 26. Led by the United Front of Workers (FUT), the National Union of Educators (UNE), the Confederation of Indigenous Nationalities of Ecuador (CONAIE), and the Citizen Revolution, the protests took off in earnest. While these protests were met with stiff resistance from the armed forces, they did not fade away. Roads were blocked in key areas in the Sierra and the Amazon and mass demonstrations gathered in front of the Carondelet Palace, the seat of the president in Quito. After a few days of protest, on October 28, CONAIE leader Leonidas Iza called for their suspension to honor the Day of the Dead holidays. Iza said that the protests will start-up again after the celebrations.

Taroa Zúñiga Silva is a writing fellow and the Spanish media coordinator for Globetrotter. She is the co-editor with Giordana García Sojo of Venezuela, Vórtice de la Guerra del Siglo XXI (2020) and is a member of the Secretaría de Mujeres Inmigrantes en Chile. She also is a member of the Mecha Cooperativa, a project of the Ejército Comunicacional de Liberación.