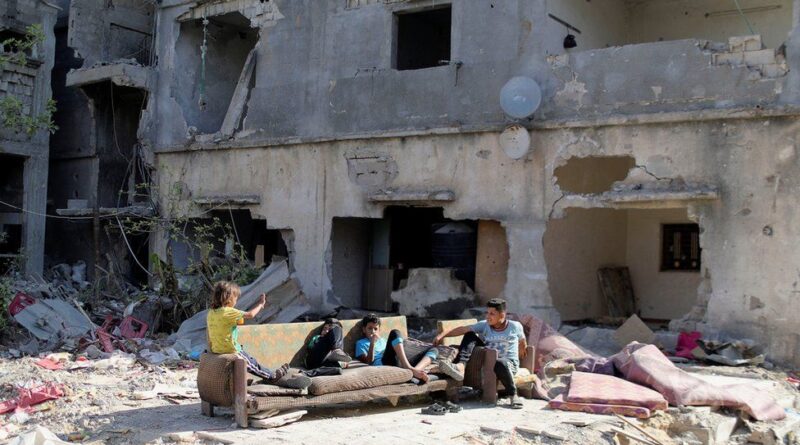 The story ‘Egypt planning to retake control of the Gaza strip’ has appeared in many of the Zionist Israeli newspapers over the last few days.

This headline has many rejoicing. New homes, infrastructure and shelter for some of the 2 million Gazans living under Israeli occupation and siege.

Remember Israel controls the land border, six of the seven entry points with Gaza, the seas around Gaza and its airspace. Under international obligation it is seen as occupying Gaza. Israel also retains the right to militarily re-enter Gaza at any time.

Israel has occupied Gaza since the six-day war in 1967. They withdrew their military forces and their illegal settlements in September 2006 under the premiership of Ariel Sharon. He was held responsible for the Sabra and Shatila massacres carried out by the Christian Phalange in Beirut in 1982 between 18.00 on 16 September and 08.00 on 18 September. An estimated 460 to 3500 unarmed civilians were brutally massacred. The camps were surrounded by the Israeli defence forces who gave cover for the attack.

The Palestine Liberation Organisation had agreed to leave Beirut and once they had gone many of their family and neighbours, mostly the very young and the very old were cruelly, sadistically and systematically killed by the Zionist allies.

Construction material, contractors and equipment are flooding into Gaza.

This sounds like the answer to all our prayers.

A neighbouring Arab country coming to the aid of the besieged and defenceless Palestinian people. Many of those living in Gaza to include the recent 60,000 displaced and homeless due to Israel’s latest murderous onslaught are refugees from 1948 and 1967 from previous Zionist murderous campaigns.

Gaza was under Egyptian protection until the six-day war in 1967 when Israel attacked Syria, Egypt and Jordan so it could occupy East Jerusalem, the West Bank and Gaza.

Under President Mubarak, Gaza had several lifelines to the outside world. The tunnels that ran between Rafah and Egypt allowed consumer goods to flow in and out of the strip. It also allowed limited access for Gazans to Egypt to buy gifts and taste life without occupation for a short time.

RELATED CONTENT: On the Politics of Victory and Defeat: How Gaza Dethroned the King of Israel

Mubarak was a dictator, he was replaced by President Morsi in June 2012 as Egypt’s first democratically elected leader.

Neither America nor Israel respected the fact Egyptians had elected Mohamed Morsi as their leader. The man who headed the Muslim Brotherhood in Egypt and whose sister party had been elected as the government of Gaza Hamas in 2007 was unacceptable to them.

As President Morsi began to lessen the hardships endured by Gazans he was ousted by a military coup and Sisi was brought to power.

Many believe this coup was instigated with Israeli and American foreknowledge and support.

The siege on Gaza can only be complete with Egyptian connivance.

The Rafah border crossing between Egypt and Gaza allows only people to transit. All goods and vehicles must go through the Israeli border checkpoint.

The tunnels were flooded and Gaza abandoned to its fate.

The relationship between Gaza, Hamas, Egypt and Sisi was fragmented.

After Israel’s murderous campaign in 2014, no efforts were made to rebuild Gaza.

The infrastructure was devastated, the siege enhanced and the human suffering exacerbated.

Why now. Why Egypt. Why the sudden concern?

let me propose a hypothesis.

Israel can lay siege to Gaza. It can bomb Gaza. It can destroy Gaza but it cannot destroy the resilience of the Palestinian people nor the resistance the occupation creates.

How can Israel prevent the resistance in Gaza from firing rockets into historic Palestine, some call Israel?

It cannot reoccupy Gaza, the cost in soldiers lives is a price Israeli families are not willing to bear. They are happy enough to face down children, old men, women and unarmed Palestinians as they steal the homes, land and resources from the occupied people. They are cowards when it comes to facing real resistance from Gaza.

Gaza is now a wasteland from the latest zIonst campaign.

Sewage is now discharged into the sea, the only real haven for many Gazans as treatment works are now non-functional.

The electricity only works for a few hours a day and life-saving medicine is restricted as is gas oil fuel food and many basic necessities.

How will Israel prevent resistance from Gaza to its continued attacks on Al Aqsa on East Jerusalem and in the occupied West Bank?

It will get Egypt to do it.

First, we heard calls for a military buffer force.This would be used to monitor and or enforce any Hamas, Islamic Jihad and Popular Front for the Liberation of Palestine operations against Israel.

This has been replaced with Egypt offering to rebuild Gaza.

I feel sure part of this offer to help will be conditional on resistance holding to the ceasefire with Israel.

The Israeli destruction of Gaza was unprecedented in the latest attacks and perhaps this was the goal of Zionism.

Bomb Gaza back to the stone age and make them desperate for any and all aid . Make that aid conditional.

What Israel has failed to achieve by siege, by military incursions and by the inhuman mass bombing of the civilian infrastructure is trying to succeed via Egypt.

Who is really funding this rebuilding programme?

Is it Israel in the background or America footing the bill as Biden promised to help rebuild Gaza?

Are we witnessing true humanitarian concern from the man who flooded the tunnels, who tightened the screw on Gaza who gave no material aid after 2014?

Can we say in truth this is the latest political manoeuvre to emasculate the resistance in Gaza? To weaken and make it less effective?

Israel wants to do this with as little Palestinian resistance as possible.

It can raid homes in the dead of night, arrest people from 12 years and upwards, fill their courts and their prisons with those who dare resist the illegal occupation.

It will assimilate all it can as cheaply as it can.

I am happy to see the people supported. I hope they can live in peace free from Zionist aggression.

Gaza has been bombed, attacked and invaded four times by Israel in the last 15 years under Netanyahu. He has murdered Gazans and destroyed their homes, lives and livelihoods in order to get himself re-elected.

Israel can destroy Gaza at any time with its arms supplier America footing the bill.

This may only be a temporary reprieve for Gaza so Israel can, unchallenged and unaccountably complete its physical assimilation of Palestine.