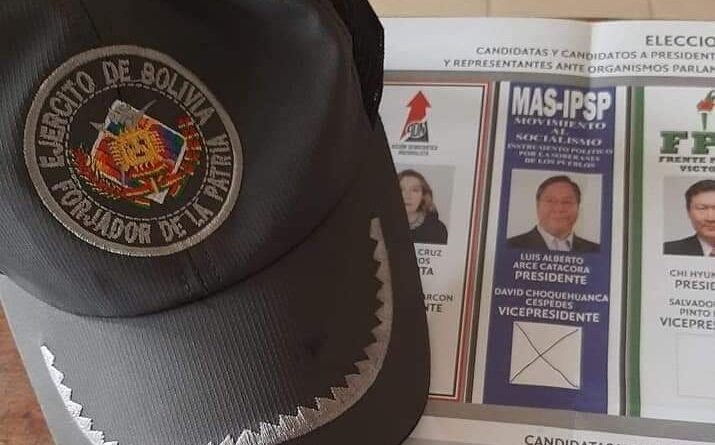 The Movement for Socialism (MAS), the leading party in the polls, regrets that the Supreme Electoral Tribunal suspended the quick vote count less than 24 hours before the elections.

Millions of Bolivians went to the polls today to choose their next president in an election in which no serious incidents were reported, and with which the country hopes to resume the democratic system that was interrupted with the coup that the Government of Evo Morales suffered last year.

The president of the Supreme Electoral Tribunal (TSE), Salvador Romero, described the day as “satisfactory,” since only minor incidents were reported, such as delays in the opening of some polls, or long lines and waiting times to vote.

“I want to highlight the atmosphere of tranquility and serenity that has permeated the entire country; we are about to conclude with the satisfaction that citizens have come out in a massive way to vote calmly and with patience; we urge that this attitude and behavior stay in the next phase, which is the vote count,” he said at a press conference.

Throughout the day the presidential candidates, the de facto president Jeanine Áñez, and the former president Morales, concurred in their call for Bolivians to go to the polls and carry out the vote peacefully.

The polls, to which 7.3 million Bolivians were summoned, began to close at 5:00 pm Bolivia time, the time stipulated by the electoral authorities who, at the last minute, decided to cancel the rapid vote count they had planned, which will postpone the official results for an indefinite period.

Hours before the voting began, the president of the TSE warned that the tests of the new Preliminary Results Dissemination system (DIREPRE) did not provide certainty regarding the data, so it was better not to release it.

“The results of the tests do not allow us to have be assured of the dissemination of the data provided to the country,” he said in a decision that had the endorsement of observers from the Organization of American States (OAS), the European Union , United Nations and the Episcopal Conference of Bolivia. The first two of these have been heavily questioned for their role in the coup d’état against Evo Morales, as they pronounced allegations of fraud that were later proven unsubstantiated by experts in different countries.

The candidates
The candidate of the Movement for Socialism (MAS), Luis Arce Catacora , who leads the polls, criticized the unexpected decision that TSE made just before the elections.

“The TSE has had enough time to carry out tests; you have to remember that we observed how this system was being carried out and we pointed out that it was a setback due to transparency issues; they argued a technical issue, but it surprises us because this makes us believe that the work has not been done seriously and responsibly,” he said this morning when casting his vote.

The MAS standard-bearer warned, however, that the party has its own counting system and promised to respect the results, recalling that this party never took power with arms, but through democratic means.

Carlos Mesa , the Citizen Community candidate who throughout the campaign was the main rival of Arce, also regretted the decision of the TSE, although he trusted that it was done to guarantee the credibility of the result.

“It is not ideal, but we understand it perfectly, we are going to be patient and we ask the population to be so, I think that eliminates susceptibilities, ” he said after voting, recalling that last year’s electoral conflict broke out precisely because of alleged irregularities that occurred during the fast-counting process. The October 20, 2019 elections were finally invalidated, which ultimately led to the “early end” of Morales’ government.

When he went to his polling station, Luis Fernando Camacho, the candidate of the far-right alliance Creemos, one of the main promoters of the coup against former president Morales, limited himself to pointing out that he had a lot of “hope and trust in God,” and that the people would be the primary safeguard of the vote.

For democracy
“Today I ask everyone, regardless of any political differences, to vote peacefully and with Bolivia and democracy in mind,” de facto president Jeanine Áñez wrote earlier on her social networks.

Later, when casting her vote, she summoned Bolivians to go to the polls peacefully. “We want a democratic party, that I think we deserve after so many months of anxiety; our obligation is to show that we want better days for Bolivia, and to consolidate our democracy,” said Áñez, who has governed the country since November 12 of last year, when she proclaimed herself president two days after Morales was forced to resign by the Army, and with the blessing of the US Embassy.

Áñez’s role has been widely questioned, since upon assuming she promised she would not run for the presidency as finally did, although last month she had to withdraw from her candidacy due to the low intention to vote that the polls anticipated.

Furthermore, although this Sunday she spoke out in defense of democracy, her campaign has focused on preventing and hindering a new MAS victory at all costs.

In Buenos Aires, where he is in exile, former President Morales called for peaceful voting, and for avoiding response to any provocation. “The great lesson that we must never forget is that violence only generates violence and that with it we all lose,” he said.

Morales added that the elections must always be a celebration of democracy. “Our diversity is the richness of our identity and is the source of our unity. It is very important that each and every one of us calmly wait for each and every one of the votes to be counted,” he said in a message in which he also called to the Armed Forces and the Bolivian Police to fulfill “with fidelity their very important institutional and constitutional role.”

The viral photo of today, a patriotic military officer casts their vote for the MAS. pic.twitter.com/z75kAWhKu4

On his Twitter account, Kawsachun News journalist Oliver Vargas, reporting from Bolivia, posted a photo that went viral of a ballot with Luis Arce chosen next to the hat of a military officer. For many this was an indication of the numerous Evo Morales and MAS supporters that still remain within the Bolivian army, and who will work to ensure that the popular vote is respected.