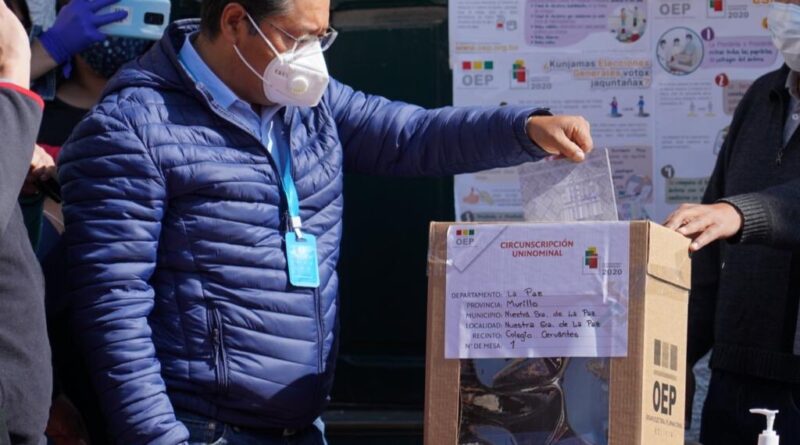 This Sunday, October 18, Luis Arce, candidate of the Movement to Socialism (MAS), favored to win the Presidency of Bolivia, exercised his right to vote at the Cervantes College in the Miraflores area of Bolivia’s capital, La Paz.

“We hope that the whole process will pass in a peaceful manner,” said the candidate near the polling station.

He also published on his Twitter account photos of the moment he fulfilled his suffrage and indicated: “In compliance with my political and constitutional right, I cast my vote very hopeful, trusting that this day will unfold in peace and tranquility.”

He stressed that the winner in this electoral contest “will be the Bolivian people who will recover democracy through voting.” Arce’s running mate for the Vice Presidency is David Coquehuanca.

According to trusted reporters on the ground the process has passed without major incidents of violence, though journalist Oliver Vargas from Kawsachun News did report an attack against him by a group of right-wing pro-coup sympathizer.

I want to denounce that Bolivian coup supporters tried to assault me just now while I filmed @EvaCopa_Bol at a polling station in Ciudad Satélite. They know they've lost the vote so they resort to violence against journalists. This is how Camacho & Mesa supporters operate. pic.twitter.com/DIutekIrzd

Right-wing candidates Carlos Mesa and Luis Fernando Camacho participated in these elections but most polls position them in second and third place, almost 10% behind Luis Arce. It is estimated that more than 7.3 million citizens will vote to choose authorities after the coup d’état of October 2019.

According to analysts most polls carry a statistical bias because they are made in urban areas, while the majority of MAS supporters live in rural areas. In addition, analysts agree that many MAS supporters are being intimidated by the level of violence and repression of Jeanine Áñez’s de facto government, leading them to reject participating in polls or to choose a difference candidate from the one they will actually vote for.