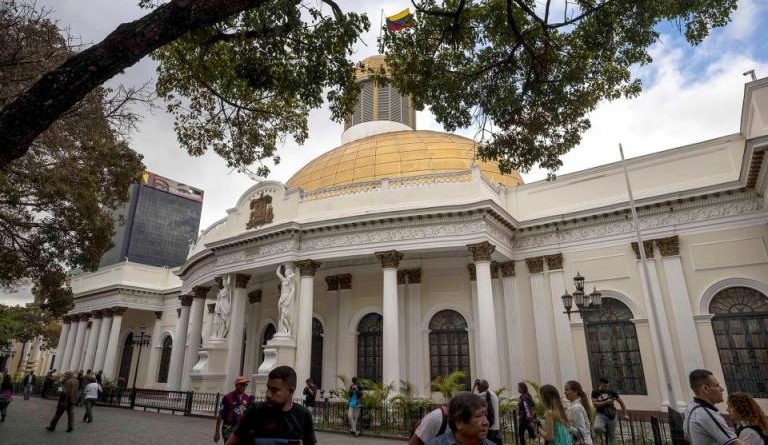 Nicolas Maduro has had a constant theme that he has been saying since last year; affirming that there would be legislative elections in 2020, as the electoral calendar indicates. If then it was a distant date taking into account the swirling dynamics of Venezuelan politics, it is now an upcoming scenario around which the debates are focusing.

This is a complex issue for three central reasons. First, there is an election for the National Assembly, a space over which the opposition built its institutional trench since 2016 and which, since last year, was appointed by the United States as the only legitimate institution in Venezuela, a ruse through which they appointed Juan Guaido as their interim president.

Second, because there is a new president of the legislative power since January, Luis Parra, a member of the opposition party Primero Justicia (Justice First), who addresses sessions in the headquarters of the parliament. But Guaido and the deputies coordinated around his bloc have not recognized that victory and they are holding sessions in public squares claiming to be the real legislative board.

Third, that same division within opposition ranks responds not only to disputes over business and corruption as they have accused each other but precisely to the strategy towards the next elections. The National Assembly presided by Parra, as well as the opposition grouped in the so-called National Dialog Table, is working towards the legislative elections, while Guaido’s sector claims that the next elections should be presidential.

The opposition that is going to participate in the legislative elections was a minority until last year. But since September to now they have gained strength, adding leaders, parties, and the effect has inverted things. Guaido, who responds solely to the plan devised by Washington, seems to be in a minority now.

There is a cross-cutting aspect to this debate and that is the renewal of the National Electoral Council. A commission made by deputies from Chavismo, from the National Assembly chaired by Parra and deputies grouped around Guaido was reactivated this week to work on the creation of a new electoral power board.

But, as deputies from Chavismo and the opposition distanced themselves from Guaido’s position that the new electoral body will be aimed at legislative elections, Guaido states that even though he is part of the commission for the new electoral power he will only participate in the presidential elections.

That same stance has an international correlation. The Lima Group, for instance, met last Thursday in Canada and released a final declaration affirming that “legislative (elections) alone are a problem and what is needed at this moment are free presidential elections.”

That is the official stance taken by the U.S. policy and besides that any presidential elections must be held without Maduro in the presidency. This is what, translated in Venezuela, Guaido has been reiterating weekly for over a year now; the cessation of the usurpation, followed by a transitional government and free elections, that is, the formula that resulted in Bolivia with the coup d’état.

While the electoral debate moves towards a possible new Electoral Council board and an election date, the U.S. strategy is to strengthen the blockade against the Venezuelan economy even more. The Treasury Department this week sanctioned the Russian oil company Rosneft Trading S.A., a subsidiary of Rosneft Oil, an action that adds to the attack on the Venezuelan state-owned aviation company Conviasa, announced a few weeks ago.

The objective of the United States is to lay siege on the economy to prevent the functioning of its vital areas such as the oil industry, the sale of gold, or the access to financial systems. That pressure, together with covert operations and promises to save those who betray, seeks to force the government to give in or achieve an internal breakdown.

The U.S. plan has not yielded that result and, instead of having majority support in Venezuela, it has widened rejections both in society and in sectors of the political and economic opposition leadership. Those who oppose the policy of suffocation are the same who are standing for the legislative elections.

There are days, weeks and months of negotiations left. The plan of Chavismo and the sector with which it dialogues is to succeed in gathering as many opposition forces as possible in order to give greater legitimacy to the vote.

Guaido’s challenge is to stop that political migration, for which he needs to offer a different plan than only suffocating the economy, which yields concrete results. Once again, who could have the capacity to do so will not be him but the U.S. power, which will depend on an overlapping of electoral and geopolitical calculations.