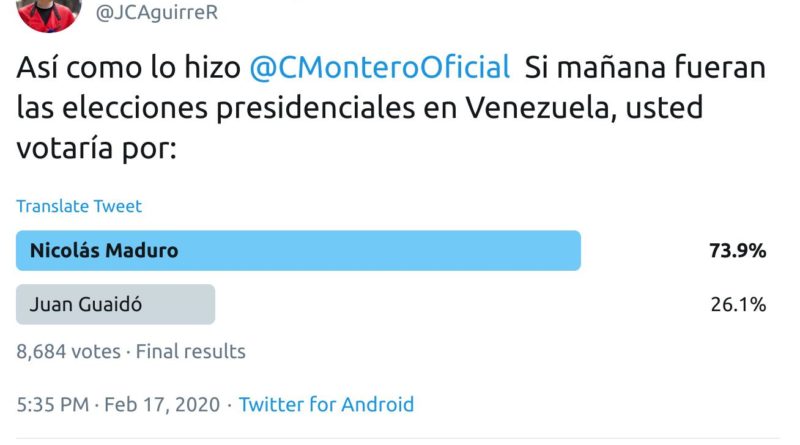 The final result was 60 percent favoring current Venezuelan president Maduro, while only 40 percent would do so for the opposition deputy.

Due to right-wing criticism Montero tweeted: “to those saying that my followers are Chavistas and that is why Maduro won, I remind them that a few months ago I launched another poll asking if they were in favor of US military aggression and 90% said yes.”

However, Colombian-Venezuelan journalist Juan Carlos Aguirre, a former worker at the NTN24 news portal and declared “anti-Chavista”, hoping to show that the results of Montero’s survey were not real, launched his own poll with a similar question. To his surprise, his query yielded worst results for Guaido: Nicolás Maduro 73.9% and Juan Guaidó 26.1%.

Subsequently, Aguirre published a tweet in which he indicated that Ecuadorians, Bolivians, Nicaraguans, etc. had voted to try to hide the preference for President Maduro, even on Twitter.

“Anti-Chavista journalist (ex @ NTN24) publishes survey on alleged elections #Venezuela and @NicolasMaduro beat @jguaido by KO. Did the right lose confidence in their candidate? Who would they find to replace him?” Montero tweeted.