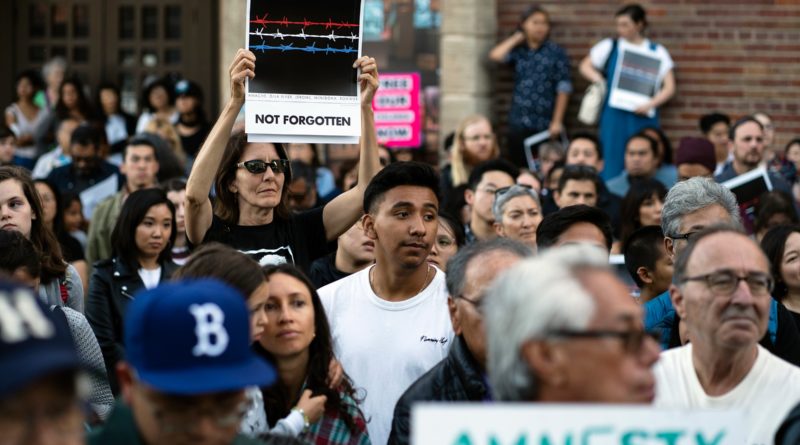 Francisco Morales Torres, 26, is currently locked up in Immigration and Customs Enforcement (ICE) detention in Juneau, Wisconsin. Torres, who identifies as queer, has been placed in solitary confinement at least twice, according to his lawyer — not an uncommon situation for many LGBTQ people detained by ICE. Community organizers, who point out that solitary confinement is torture, worry about the impact it might have on a young man with a history of mental illness.

As a child in Morelia, Michoacán in Mexico, Torres says he was chastised by his Catholic school for spending too much time with girls. Neighbors mistook him for his mother when he answered the phone, and occasionally pulled her aside to opine that her son was not being reared properly.

“Growing up I felt embarrassed of my effeminate qualities,” Torres said over the phone from the Dodge County Detention Facility, a Wisconsin jail where he has been held for over a year. His fears stem from a history of anti-LGBTQ+ violence in Mexico. “I was bullied in school, and had high anxiety about how that mistreatment might get worse. Luckily, my parents were supportive, even if other members of my community were not.”

When his father fled after losing the family home due to unpaid debts, Torres’s mother made the arduous journey on foot through the desert to cross the Mexico-U.S. border. Torres says she was caught and sent back twice by Border Patrol before making it on her third try. By 2005, she relocated to Arlington Heights, a suburb of Chicago, where a childhood friend took her in. She worked multiple low-paying jobs to save up to bring Torres and his infant sister to join her.

RELATED CONTENT: Brazilians March Against Bolsonaro and his Ties to Murder of Activist

The following year, Torres, 13, crossed the border, sister in tow. The two posed as the children of friends who are U.S. citizens, and finally arrived in Arlington Heights. Torres soon took up odd jobs to help pay for his younger sister’s expenses.

Torres applied for and received the Deferred Action for Childhood Arrivals (DACA) program, which grants limited protections for certain undocumented people who entered the U.S. as minors. He graduated high school, and came out as gay shortly thereafter. While his more affluent friends left for college, he was left alone, discouraged from applying to universities because his undocumented status meant he wasn’t eligible for federal financial aid.

ICE has a long and well-documented history of medically neglecting LGBTQ+ detainees and using solitary confinement as a form of retaliation against queer and trans people.

Torres has since been diagnosed with major depressive disorder and borderline personality disorder, which he has had to grapple with largely alone. “My parents weren’t negligent,” he says. “They just didn’t have the knowledge to support me. Mental health was not something they talked about in their culture.”

Meanwhile, after high school, Torres was exploring Chicago’s gay scene for the first time, which offered new access to drugs and alcohol, he says. During this period, he started experiencing acute episodes where he became intensely paranoid, imagining that he was embroiled in various conspiracies.

In the midst of one episode, he says he drove off in a neighbor’s car after she left the keys in the ignition, convinced he must do so as part of a “special assignment.” Although no one was hurt, and no damage was done to the vehicle, Torres was arrested. He received a 90-day jail sentence and three years’ probation. His DACA protections expired shortly thereafter, and in October 2018, ICE agents showed up at one of his probation meetings to arrest him, taking him immediately to the immigration jail where he’s currently being held.

Collaborations between law enforcement and ICE are on the rise, activists warn. “Cook County turning people over to ICE, or ICE literally fishing for people in the county court/probation offices, is definitely a trend,” explains Arianna Salgado, a member of Organized Communities Against Deportations (OCAD), a Chicago-based group led by undocumented folks that organizes against the detention and criminalization of Black, Brown and immigrant communities. Salgado has been a part of the community-led effort to get Torres released. “This shows us how solidified the connection is between the criminal system and the immigration system.”

If the deck seems stacked against undocumented people with criminal records, it is even more so for queer and trans folks. Moreover, the stresses and traumas associated with migration, coupled with those that accompany marginalized sexual and/or gender identities, and lack of access to health care and opportunities for educational growth, all coalesce to heighten the risk of mental health crises.

“[ICE’s] impulse is always to detain vulnerable communities,” states Sharita Gruberg, director of policy for the LGBTQ Research and Communications Project at the Center for American Progress, noting ICE’s seemingly arbitrary detention of LGBTQ+ asylum seekers regardless of their perceived risk to public safety.

Department of Homeland Security (DHS) officials did not respond to a request for comment on Torres’s case.

“His case clearly demonstrates how poor, queer, undocumented folks who deal with mental illness are treated within the criminal and immigration systems.”

While policing — rather than health care — has traditionally been the response to mental illness in oppressed communities, this approach brings particular dangers for queer and trans undocumented people. ICE has a long and well-documented history of medically neglecting LGBTQ+ detainees and using solitary confinement as a form of retaliation against queer and trans people. Due in part to this type of isolation, LGBTQ+ detainees are 97 times more likely to be sexually victimized than other members of the general population.

Torres says he has been held in solitary confinement for inquiring about food prices in the commissary and for defending an elderly man with a physical disability from harassment. Arguing with a guard who confiscated some of his books got him two weeks in lockdown in his own cell, he adds.

“There is never a situation where solitary should be used in civil detention,” says Gruberg. In June of 2019, the Center for American Progress and 50 local, state and national LGBTQ+, immigrant, disability rights and faith organizations published a letter addressed to the DHS, denouncing the overuse of solitary confinement for LGBTQ+ people and people with disabilities, including mental illness.

“Solitary is torture,” she says. “No one in civil detention should undergo torture, no matter the justification.”

Indeed, the UN Special Rapporteur on Torture Juan Mendez, has stated in a 2011 report that solitary confinement by any name should be banned by all countries:

Considering the severe mental pain or suffering solitary confinement may cause, it can amount to torture or cruel, inhuman or degrading treatment or punishment when used as a punishment, during pre-trial detention, indefinitely or for a prolonged period, for persons with mental disabilities or juveniles.

During much of his detention, Torres did not receive even minimal treatment for his mental health conditions, according to his lawyer, Tania Linares Garcia of the National Immigrant Justice Center. Torres says he spent his first eight months in detention without his anxiety medication. A representative of the Dodge County Detention Facility could not be reached for comment, but it states on its website that “The facility does not discriminate based on disability and provides detainees with disability-related accommodations, as needed, to access its programs and activities.”

Michaé Pulido, policy coordinator for the Los Angeles-based TransLatin@ Coalition, says that lack of basic medical care is common under ICE detention. She was part of the #FreeAlejandra campaign, which fought successfully to free Alejandra Barreras, a trans asylum seeker from El Salvador, from the Cibola County Correctional Center. Medical neglect was a key issue in her case, and Barreras lost three teeth while in lockup, said Pulido.

“The visibility and surveillance of trans and queer bodies in detention is higher,” Pulido says. “It takes a mental and physical toll, and solitary makes it even worse.”

In March 2019, Torres says he applied for and was granted asylum in the U.S. by an immigration judge. But he remained in detention.

“The government appealed the grant of asylum and refused to release him during the pendency of the appeal,” Garcia explains. “The Board of Immigration Appeals then overturned the asylum grant. We’re now on remand before the immigration court seeking other forms of relief and appealing the board’s decision.”

Salgado of OCAD sees the Torres case as broadly significant. “His case clearly demonstrates how poor, queer, undocumented folks who deal with mental illness are treated within the criminal and immigration systems,” she says. “They are removed from community and support, making it harder for them to access care and healing. We strongly believe that removal from community is not what people need. People need access to care and resources.”

Torres worries that if he is deported to Mexico, his sexuality, coupled with his struggles with mental health, will put him at risk of violence and persecution. “With the recent passage of gay marriage, Mexico is looking better on paper,” Torres says, “but [being gay] is still not widely accepted.”

He is particularly concerned about being placed in an institution for his mental health conditions in Mexico, which he fears could be even worse than U.S. detention.

In the coming months, community members and organizations like OCAD will continue to push for Torres’s release, even as he and Garcia plan their next legal moves.

“Working on cases like Francisco’s, we’re really seeing how difficult it is to go through the asylum process under this presidency,” says Salgado. “At every step there’s a new wall or bump. And we’re seeing what the prolonged wait inside a detention center does for the mental health of those who are already struggling.”

Featured image: People protest the Trump administration’s plan to use the Fort Sill Army Base as a migrant jail in Los Angeles, California, on June 27, 2019. RONEN TIVONY / SOPA IMAGES/LIGHTROCKET VIA GETTY IMAGES