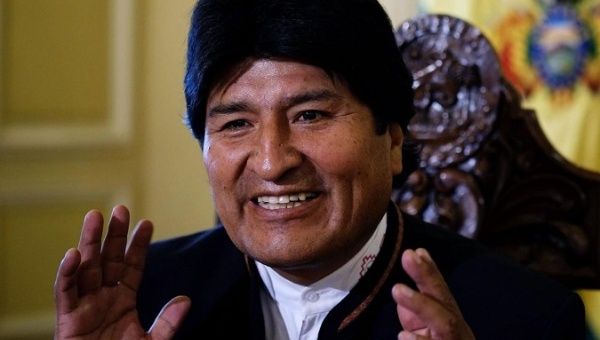 A new April survey revealed that President Evo Morales is leading the polls for this year’s elections, whereas a survey by the same pollster last month had shown him in second place.

A new survey by the local outlet Pagina Siete revealed that Bolivian President Evo Morales is ahead of his opponent Carlos Mesa by six points. Around 34 percent of the interviewed said they would vote for Evo while 28 percent said would vote for right-wing politican Carlos Mesa.

Edgar Monatño, a lawmaker from Evo’s party Movement Towards Socialism (MAS) said the poll reflects the wish of the majority of the people who “accept” the president’s candidacy.

The fieldwork was carried out from April 13 to 17, in 35 cities of the country. The survey has an expected margin of error of 3.47 percent.

In previous Pagina Siete polls Carlos Mesa was ahead of Morales. However as the country gets closer to the October elections, Morales seems to be leading the latest polls, which corresponds with a survey carried out by Latin American Geopolitical Strategic Center (CELAG) which put Evo ahead at 45 percent to Mesa’s 35 percent.

In Bolivia, polls continue to emerge in the face of presidential elections. The good thing is that @ PaginaSIETEBol does not say that Mesa wins (nobody believed it!). And it gives 6 points up to Evo. Ipsos also gives 8 up to Evo. And in @ CELAGeopolitica gives us 10 up in favor of Evo as President

In the latest survey, eight percent said they would vote for Oscar Ortiz and Edwin Rodriguez, another candidate.

The results also revealed that the percentage of uncertainty rose from 20 percent in March to 24 percent in April.

The CELAG study highlighted that Evo Morales is the only candidate with a positive balance regarding his public image. Carlos Mesa is the one with the highest negative image index, according to almost half of the respondents.

According to the survey, the improvement of education and health should be the priority of the next president of Bolivia, as well as the construction of hospitals and schools, according to 69 percent and 65 percent of the respondents, respectively. The fight against corruption is the third preoccupation of Bolivians.

The Bolivian elections are scheduled for Oct. 20.