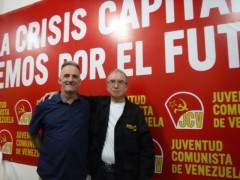 On their first day in Venezuela, April 28, the Freedom Road Socialist Organization (FRSO) delegation held a two-hour meeting with members of Communist Party of Venezuela (PCV) Central Committee and leaders of the Communist Youth of Venezuela.

The FRSO delegation is headed by Organizational Secretary Tom Burke.

The groups shared their views on the revolutionary struggle in both of their countries, and the importance of international solidarity.

Pedro Eusse, a PCV Politburo member and trade union leader, said “If there is anything positive about the U.S. aggression we face today, it is that there has been an explosion of solidarity from the United States and around the world.”

Both groups agreed to move towards a closer working relationship in the future.